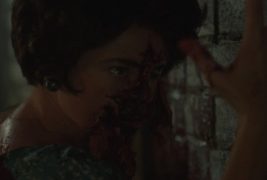 Picking up after Episode 4’s shocker of an ending, “Strange Case” begins with Tic violently confronting Montrose, but really centers on Ruby Baptiste (Wunmi Mosaku), now living with William (Jordan Patrick Smith) and offered a Faustian bargain: the possibility of living as a white woman through the Braithwhites’ magic. What follows is a seduction, both societal and occult, that tempts Ruby down a dangerous path.

With its emphasis on forbidden (and sometimes violent) sex and changing skins, “Strange Case” has a decidedly Barkerian feel. The body horror always implicit in the Braithwhite cult is fully on-display in all its gruesome, blood-soaked, skin-shredded grotesquerie.

As we’ve come to expect from Lovecraft Country, the genre elements serve the commentary and vice versa. While the term “privilege” is often used and generally poorly defined, Ruby’s newfound social power as the white wife of a rich man gives a powerful illustration—and one which affects Ruby’s sanity.

There are a few moments where the intersectional gospel gets a little heavy-handed, but director Cheryl Dunye generally keeps the balance, and it’s a lot of fun to watch Ruby’s very Lovecraftian descent into insanity begin to spiral as Mosaku is given the screen-time to give an understated but still chilling performance. In fact, she’s made Ruby one of my new favorite characters, and I look forward to watching her arc continue to play out this Sunday.