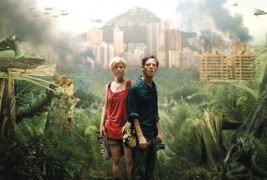 Your opinion of writer/director Gareth Edwards film, “Monsters”, will depend on how much sway your expectations have over you.  If you’re like me, a film nerd who’s a sucker for all well made films regardless of genre, then you’ll probably agree that Edwards’ film is an unquestionable success.  If you’re a hardened horror fanatic who doesn’t stand for the annoyances of character and subtlety polluting your standard genre tropes, then you may be disappointed.

“Monsters” begins six years after a NASA space probe broke apart over the southern United States on its way back from a sample-collecting expedition in an attempt to find evidence of extra terrestrial life.  Soon after, large life forms – monsters if you will – began evolving and inhabiting the sprawling crash site which covers the southern U.S. into northern Mexico.  Dubbed the “Infected Zone”, fenced off, walled up, and aggressively patrolled by the military, this vast area is now a dangerous wasteland that also presents a navigational nightmare.

Photojournalist, Andrew Kaulder (Scoot McNairy) is in Central America photographing the carnage left behind by the giant alien beasts and their military antagonists.  When Andrew’s boss calls and asks him to escort the boss’s daughter, Samantha (Whitney Able), a stranded tourist, safely home to the States, he reluctantly agrees.  However, things soon go from inconvenient to perilous.  After trying and failing to help Samantha get to a ferry that sails around the infected zone, Andrew joins Samantha on a dangerous trek through the infected zone together with the halfhearted help of renegade guides and officials with well-greased palms.

The lives that Andrew and Samantha each left behind in the States beckon them home, but their journey there together changes them each in profound ways.

“Monsters” is in essence an intimate, small-scale character drama set against the backdrop of a large-scale, sci-fi monster melee.  Edwards tells this story with deft skill, using beautiful imagery to establish subtle thematic motifs while never rushing the film’s pace or selling out its emphasis on the evolving and complex relationship between the two principals.  This is a monster movie in the broadest sense, but with art house sensibilities at its core.

Scoot McNairy playing Andrew and Whitney Able playing Samantha are both fantastic.  Their characters are fully realized and shaped almost entirely by things off-screen, in the past, and someplace else.  Both actors embrace the weight that these intangible elements bear on their respective characters, and by virtue of some really nice writing by Edwards, McNairy and Able never have to present these elements through clumsy expository dialogue, but rather through subtext delivered through their exemplary performances.

Britain’s first time feature director, Gareth Edwards, cut his teeth doing visual effects for several documentaries and later directed a few of them.  “Monsters” has Edwards wearing many hats, having written, directed, and provided the film’s visual effects.  Perhaps the most remarkable fact of this film’s production, and one that’s most telling of Edwards’ talents, is the film’s $15,000 budget.  Vertigo Films couldn’t have dreamed of a bigger bang for the buck.

Although “Monsters” isn’t a horror film in the strictest sense, it is a genre movie made for sophisticated film goers.  It joins the ranks of other recent gems, such as “Martyrs” and “Let the right One In”, providing more evidence that in an overcrowded crop of bad American studio remakes, indie horror and foreign horror currently provide the very best the genre has to offer.