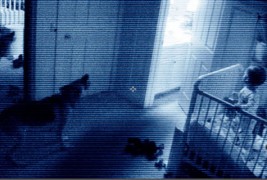 What do movies with a relentless killing machine and an old man chasing a little boy through a tomato patch have in common? Their sequels were as good, if not better, than their predecessors.  Of course I’m talking about “The Terminator” and “The Godfather”. So if you loved the first Paranormal Activity there might be a treat waiting for you in the theater.

In Paranormal Activity 2 there are moments that are similar to the first “PA”.  But there are changes that, in my opinion, make up for it in “PA2”. It is not a clone of the first, but has all the fright and more of what made the first one successful.

It has a larger cast consisting of eight and a half terrorized characters (What?  A half?).

Reprising their roles from the original movie are “Katie” (Katie Featherson), of the not-so-well-received movie “Mutation” and her boyfriend “Micah” (Micah Sloat).  Didn’t Micah die in the first movie?  I’ll get to that later.

The other actors that fill out the cast are basically “no-namers” which adds authenticity to the film and makes it feasible that this scenario could happen to anyone.  This heightens the thrill factor.  You’re not constantly being reminded of an actor you’ve seen in handfuls of overplayed commercials (Like actors from Geico ads.)

Sprague Grayden – the most seasoned actor in the film, plays Katie’s sister, Kristi.  Her husband ‘Danial’ (not a typo) is played by Brian Boland of “The Unborn.”  Danial’s teenage daughter from another marriage, Ali (Molly Ephram), her boyfriend, Brad (Seth Ginsberg), and brand new baby Hunter all live under the same roof.  Vivis Cortez plays their housekeeper and there’s also Abby the German Sheppard played by, of course, Abby. The more I think about it, I am going to have to bump up Abby from a half character, to a full one. She’s in tons of shots if not all of them, and she even has some scenes that are all to herself.

As it turns out, this movie is a prequel. Ta-Da! That’s why Micah is in this film, but in a significantly smaller role. It was a pleasant surprise to learn this in the theater. I had no idea until I saw it happen on screen. The writers pleasantly and seamlessly wove some footage from the first Paranormal Activity into the second to give you a time-line of all the events leading up to the end of the first film.

Why do I like this film better than the first? Because you never know when something freaky is going to happen.

The movie starts out with the family coming home to a trashed house, but nothing appears to be missing. The family, thinking it’s a series of break-ins, has a professional camera installer put up six cameras hooked up to a DVR. So now you can see the entire house through all the cameras.

The technique they use to scare you is that every night the movie scrolls throughout out the house, from one night vision camera to the next. Sometimes nothing is going on, then the next night they go through the same motions and nothing is happening again. Then, suddenly, something freaky happens!

This uncertainty leads the watcher to be anxiously glued to the screen, unsure and on edge throughout the film. The other technique the filmmakers use to scare you is to establish the fact that daylight is not a safe haven. So again, you think you’re safe during the day, but sadly you’re mistaken. Now, you’re not safe from any part of the film – day, night, or any part of the house, for that matter.