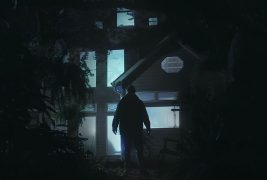 The Shelter is veteran indie filmmaker John Fallon’s feature directorial debut and as such it’s a conceptually ambitious, yet logistically spare bit of filmmaking.  He also wrote and produced it, so its passion-project bona fides are front and center.

As a vehicle for its star, fellow film vet Michael Pare (Eddie and the Cruisers, Streets of Fire, The Philadelphia Experiment), it had to be a dream gig as Pare gets to carry the load of this narrative squarely on his shoulders throughout the vast majority of the movie.

Pare plays Thomas Jacobs, a homeless widower who’s as full of self-loathing as he is empty of soul.  He has a lustful thirst that he continues to quench with women half his age, even as a street urchin, and all the while his every step is encumbered by the weight of regret and shame.

One night, he walks past a large house featuring a façade of mysteriously lit frosted-glass windows and an invitingly open door.  Thomas can’t resist the allure, so he enters the large abode and, after determining that he’s alone, he makes himself at home.

It’s here that The Shelter becomes a bit abstract.

After helping himself to some chicken from the ‘fridge and a relaxing bath, Thomas thinks he may no longer be alone so he tries to leave only to find that he can’t.  The doors won’t open and the windows won’t break.  Throughout this ordeal, we’re shown several sequences that may or may not be hallucinatory dreams or flashbacks, but their narrative purpose is expository.  We learn the source of Thomas’s shame, namely the reason his wife died and how it’s tied to his proclivity for getting laid.  The man in these sequences is a far cry from the barely functional bum Pare brings to life during the film’s first act.

The circumstances of Thomas’s life render his regrets irredeemable and his shame permanent.  The house is an objective correlative—a metaphor—for the psychological jail of Thomas’s own making.  Trapped in the house with only a loaded pistol that’s ineffectual against the doors, walls, and windows, Thomas’s only option is to confront his past one last time. 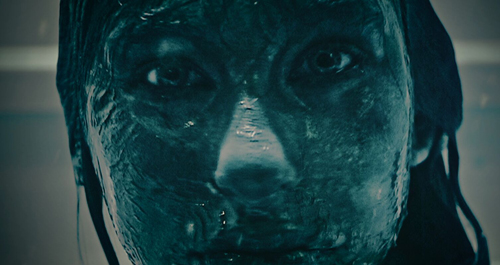 The Shelter isn’t a horror movie.  It is an unsettling-at-times psychological drama, but horror fans may have to temper their expectations.  Regardless, though, Fallon’s maiden voyage is a well-executed descent into one man’s dark state of mind and it’s as indie and it gets.  In that regard it must be considered a huge success.  General cinephiles will have a lot to marvel at here.

Michael Pare’s performance is top-notch, if not perfect.  Where there are lulls, they are largely due to the tempo of a given scene rather than Pare’s execution.  He plays darkness well, with simultaneous dangerousness and a barely perceptible vulnerability.  The contrast between present-tense Thomas and flashback Thomas is night and day, yet Pare portrays the through-line, capably representing two very different states of the same character.

The supporting cast is also good with the best of those performances coming from the roles with the most screen time.

Fallon’s movie is impressive from a technical perspective too.  Director of Photography Bobby Holbrook uses a wide 2:35:1 ratio to frame exteriors and interiors alike utilizing dramatic lighting and dynamic depths of field to visually buttress the film’s uneasy, surreal tone.

Fundamentally, The Shelter is a dark allegory about lost love, incorrigible shame, and a consuming regret.  We spend the majority of its 76-minute running time inside the head of an unlikable protagonist who’s found rock bottom and can’t help himself from continuing to dig.  This isn’t always an exciting or pleasant world to reside inside and sometimes it’s outright challenging.  Your enjoyment of this movie will depend on your expectations and your ability to immerse yourself in an at times nonliteral story.  If you enjoyed Jacob’s Ladder, this might be right up your alley, but if you’re looking for the next popcorn-chomping slasher flick, The Shelter isn’t it. 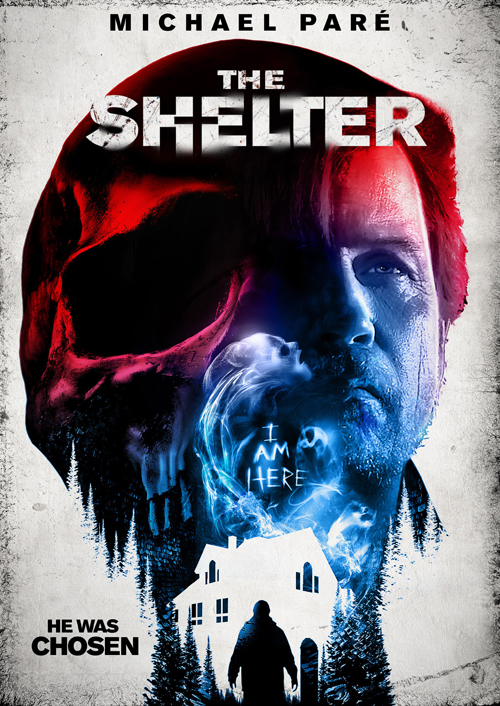 2 thoughts on “The Shelter Movie Review”