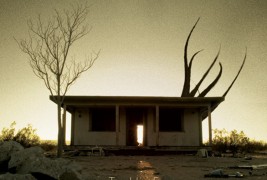 I’m stuck, Savage Readers.  On December 7th, I got assigned to review a newly-released independent horror film called The Sunderland Experiment.  I watched it, and I procrastinated.  Oh sure, there were holidays, work, family, a New Year’s hangover to recover from, other writing projects, polar vortices, etc. etc., but the real sticking point wasn’t any of these, but a more fundamental question: how am I going to write a 1000-word review of a film I can sum up in one sentence?

The Editor-In-Chief made the unfortunate decision when designing Ravenous Monster’s layout to use 11-point Calibri as the site’s standard font, so my well-oiled college trick of writing something short and putting it in Courier New can’t be applied.  “The Sunderland Experiment is an awesome movie that you should see right now—don’t even bother to finish this review,” looks pretty puny in Calibri.  Put that motherfucker in 12-point Courier New, and you’ve got a piece of text that not only looks like it was typed on a cool, old-timey typewriter, but also takes up a lot more space.  See below:

Directors Adam Petke and Sean Blau’s The Sunderland Experiment, like the best horror cinema, takes a relatively simple story (in this case, the tale of a reclusive cult somewhere in the Southwest) and spins it into a riveting film through superb use of implication, solid acting performances, and a haunting atmosphere of isolation and perversion.

Call it compensating if you must, but admit it felt bigger when you read it.  I got a whole paragraph out of that sentence.  Of course, because I’m generally stuck in Calibri, I have to fall back on a well-worn regimen of authorly gymnastics like:

Because I know that many of my readers are blood relatives, I’d like to say that The Sunderland Experiment is awesome in the same way that my Grandmother’s wedding was when I was in 3rd grade. My cousin Tom and I spent the entire reception cloistered underneath the table playing with pirate Legos, as absorbed in our own world as the children of the Sunderland cult, educated by the droning voices of “blessed” adult servants of the tentacled “Angel” that fell to earth so many years ago and first convinced them of its divinity.

If more movies released by Hollywood had the arrestingly bleak ambience and off-kilter sense of desolation of The Sunderland Experiment, maybe viewers wouldn’t see horror as lowest-common-denominator celluloid trick-turning.

It may seem hyperbolic to say that The Sunderland Experiment takes us to the same chilly regions of psychological horror that John Carpenter’s The Thing does, but there’s no other way to describe the genuine sense of alien menace that Blau and Petke create in the film.  “Lovecraftian” is an overused and often misapplied adjective, but it’s hard not to picture the Master approving of this spiritual descendent of his work.

Like every narcissistic Millennial with a Facebook author’s page and ambitions to write professionally, I believe that one day people will collect these nuggets of wisdom I shit out and build them into a beautiful wattle-and-daub hut of collected meanderings.  Here’s a juicy brick for you:

Most cosmic horror stories rely so much on tropes that they forget the crucial element of mood, something Lovecraft himself saw as the first requirement of a “weird tale.”  Much as I love Cthulhu and Yog-Sothoth, they’ve basically become action figures.  Sunderland’s Angel takes cosmic horror back to its roots.  An alien being by turns benevolent and sinister, the Angel both saves the life of teenage protagonist David (Dylan O’Brien) and marks his friend Cassie (Katie Reed) for death. O’Brien and Reed portray with wonderful verisimilitude both the confusion of two teenagers discovering love and lust for the first time and the bewilderment of human beings trying to understand a force beyond earthly experience.

The pace of The Sunderland Experiment is smooth and engaging.  There are no jump-scares, no obnoxious supporting characters we can’t wait to see die, no tedious explanations.  Blau and Petke deliver a high-concept idea with an enviable grace.  Sunderland’s ability to tell a simple tale with nuance and real fear reminds me favorably of the original Texas Chainsaw Massacre.

With The Sunderland Experiment, I’m unfortunately bereft of my usual trickery.  This is where I come back to the bottom line: I’m not sure how to review this film in a way that does it justice.  I don’t know what alchemical combination of adjectives and references will induce you, Savage Readers, to track down this movie and watch it ASAFP.  The sum total of my review is simply this:

The Sunderland Experiment is an awesome movie that you should see right now—don’t even bother to finish this review.

[1] These always piss off the EIC because they format weirdly online.  I like them anyway because I have the attention span of a cockroach and footnotes give my eyes somewhere to wander.  My footnotes are the sort of cheap frill that you don’t find in The Sunderland Experiment, where every element elegantly serves the plot with no pretensions or forced cleverness.