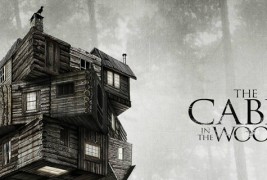 The Cabin in the Woods might be the most generic title for a horror movie you’ll ever hear, but I’m willing to bet it will be the most creative horror movie you’ll ever see.  Co-writer Joss Whedon has called the film “a very loving hate letter” to the genre we all love. This is a film made by horror fans for horror fans.  Whedon and first time director Drew Goddard bring the goods by the bunches in this romp through one of the most overused scenarios in film history — a group of good looking college kids head out to a cabin for a weekend of fun. But that’s exactly where the familiar territory ends.

With dreams of hook-ups and hits from quite possibly the coolest bong in the history of the world, our protagonists are soon out of suburbia and rumbling through the woods with little more than their trusty old camper full of beer. The archetypes are all there — the quintet comprised of Kristen Connolly as the pretty and innocent redhead, Chris Hemsworth as the All-American jock Curt, Anna Hutchison as the sexually charged Jules, Fran Kranz portraying the cerebral pothead Marty, and Jesse Williams playing the nice guy Holden, all fit the bill quite well. The dialogue between the friends is sharp-witted and fun, clearly influenced by Whedon’s experience penning fantastic scripts for Firefly and Buffy the Vampire Slayer.  It’s been reported that Whedon and Goddard scribbled out this screenplay in three days. Masterfully mixing horror and humor is no small task, contrary to the fact that these two mavens seemed to do it in a ridiculously short window of time.

We watch as this group of likeable young adults drive to their imminent doom and even as things get a little “Under the Dome” on us (don’t worry — if you’ve seen a trailer, that wasn’t a spoiler), we still don’t know exactly what this film is all about.  Almost instantly, we’re treated to images that evoke the great films of yesteryear: Deliverance, Friday The 13th, and most notably, The Evil Dead. Dense woods, narrow winding mountainside roads, and a creaky old cabin that even has a freakin’ cellar door smack dab in the middle of the kitchen floor! What more could we as horror fans want?

Once the group gets settled into the cabin, the horror nods continue as we watch the “whore” of the group get tipsy, grind on anyone with a penis, make out with an inanimate object and later she baits her stud muffin boyfriend out into the woods for a midnight roll through the grass.  But before the late night sexcapades begin, the cellar is discovered. Rather than close the door and slide the kitchen table over the portal to hell, the weekend inhabitants decide to rummage through the darkness. The friends quickly find that while scary dolls and creepy pictures are one thing, reading Latin passages out of ancient diaries and playing with spheres that look like something Pinhead created aren’t the best ideas in the world.

I refuse to offer up any spoilers about this film, but it doesn’t take a whole lot of research to understand that there’s a lot more going on in this cabin than what meets the eye. Whatever is going on behind the scenes inside an undisclosed high-tech facility is what’s really driving this story. Seasoned veterans Richard Jenkins (Step Brothers, Let Me In) and Bradley Whitford (Billy Madison, The West Wing) truly steal the show as the stoic company-men behind the horror going on in the middle of the woods. The tandem provides great comic relief throughout the film, as well as just enough ugly rot in their cores to almost make you feel bad for liking them so much.

Just when the film begins to settle into a niche, a hard left throws a whole new level into the mind fuck that is The Cabin in the Woods. Lo and behold, soon, all hell breaks loose and our young cast is torn apart — literally and figuratively.

If you have the pleasure of seeing this film with your grandmother and mother like I did, rest assured, you’ll hear a lot of “oohs” and “aahs” from the audience. As a horror enthusiast myself, I found it very satisfying to not only see new twists added to our beloved genre but also be left to think about what I’m seeing.  While The Cabin in the Woods has its fair share of blood and sexual energy, these two bastardized stereotypes of horror aren’t what drive this vehicle. Cabin is a smart and very funny horror film that works on a number of different levels. Full of tension, twists, and a wonderful homage to the ancient horror gods (ahem), don’t let any of your jaded horror-hating friends tell you they know how this film is going to end.  They don’t.

We should expect more from our horror these days. The filmmakers behind The Cabin in the Woods understand that, and the film gives it to us in delicious doses. It should come as no surprise that the minds behind Buffy, Angel, Dollhouse, Cloverfield, Lost, Alias, and Firefly know how to keep an audience guessing before sucker punching them in the side of the head with awesomeness.  For a guy who has always believed we live in a world full of monsters, not only did I love my trip to The Cabin, but it also provides quite possibly the best horror smorgasbord of all time. See it and love it for what it is — the best horror film Hollywood’s churned out in a very long time.