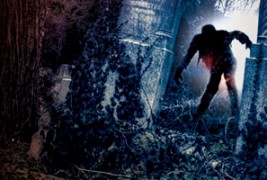 Last week, author Dana Fredsti’s Plague Town: An Ashley Parker Novel was unleashed upon unsuspecting horror fans by a sinister entity known as Titan Books.  And while Ashley Parker deserves top billing, the novel is, in fact, a full on zombie book.  Scared yet?

Another.  Zombie.  Book.  Now, before you start moaning and groaning (like a zombie) please read on because I know what you’re thinking: Please kill me now so I don’t have to read this review.  And please make sure my body doesn’t reanimate (like a zombie) so that I’m stuck reading this review after all.  I understand your reservations, but fear not.  Plague Town is another zombie book, yes, but it’s a surprisingly successful little slice of a subgenre that has, itself, died and lurched back to life many times over.

Plague Town doesn’t reinvent the wheel, especially those wheels composed of putrefying flesh and black, bloody vomit that happen to be all the rage right now.  But it does offer a relentlessly addictive yarn by way of Plague Town’s star character, Ashley Parker, whose perspective is the one narrating this tale.  She’s an infectiously likable character, one that sets this zombie tome apart from its oh-so-many less inspiring peers.

Ashley Parker is a divorced college student studying in Redwood Grove, California.  She’s a decade older than the vast majority of her fellow students, but she’s getting by with the help of her “boy-toy” Matt, and her roommate, Zara.  As Plague Town begins, Ashley’s recovering from a wicked strain of the flu that’s decimated the campus and, more importantly, made her miss the first week of classes.  When she stumbles in late to “Pandemics in History”, hunky teaching assistant Gabriel gives her the third degree until the ultra-elegant, gravitas-oozing Professor Simone Fraser shows up and introduces herself to the class.

One night, Ashley and Matt embark on a romantic picnic in the woods adjacent to campus and just as things get hot in that tried and true what’s-going-on-behind-those-bushes kind of way, they’re besieged by a shambling horde of hungry zombies.  Chaos ensues and the campus is littered with wounded, dying, and reanimating casualties.  Ashley and Matt get separated, both having been bitten.

Ashley wakes up in a campus building that’s been converted to a makeshift triage center/laboratory.  She’s weakened and sore, but otherwise okay.  As Ashley’s debriefed we learn that both Professor Fraser and her jerky-but-hot assistant Gabriel are members of a secretive paramilitary outfit that quarantines, eradicates, and covers up zombie outbreaks.  This organization has existed in one form or another for many centuries, keeping mankind safe from the walking death.

Here we learn that Ashley’s a wild card – a tiny minority of people who react differently to the zombie infection.  Rather than dying and coming back as mindless cannibal corpses, wild cards develop more acute senses, better endurance, faster reflexes, strength and healing abilities; a set of super powers if you will.  Ashley and the other handful of wild cards are to be trained and set loose on the zombie horde to help squash the outbreak.  The vast majority of non-wild cards on campus and in Redwood Grove proper, including Matt, are not so lucky.

Under the guidance of Gabriel and Professor Fraser, Ashley and her fellow wild cards undertake a dynamic mission full of gory adventure, excitement, sadness, loss, friendship and loyalty.  Can they turn back the zombie infestation of Redwood Grove or will mankind be overrun?

Plague Town is similar in concept to Madeleine Roux’s Allison Hewitt is Trapped and it’s similar in form to Charlaine Harris’s Sookie Stackhouse Series.  These books are all female-centric, first person perspectives of supernatural events that overtake small hometowns, etc.  In varying ratios, romance, fashion, and gory action-packed showdowns with nasty creatures are de rigueur.  Plague Town isn’t as “literary” as Allison Hewitt is Trapped and not as vacuous as the Sookie Stackhouse Series, wherein readers are stuck inside the head of a nitwit, which is difficult to enjoy.  Fredsti gets the balance just right, as Plague Town is a legitimate “page-turner” and in the place of beautiful, artful prose is pure story, un-obscured by linguistic artifice.  It’s not quite Hemmingway-sparse, but it’s certainly stripped down and unpretentious in its delivery.

Certain plot choices, the existence of wild cards for example, at first appear to be antithetical to good drama.  While fun in a comic book sort of way, giving our protagonists essentially super powers would seem to render impotent most potential conflicts.  However, Fredsti quickly turns this potential pitfall into a pedestal as being a wild card comes with its own unique set of perils; namely the fact that the future of humankind depends on a tiny minority of people to save it.  These people are not all hero-material, in fact most of them are anything but.  So, in a brilliant twist, Fredsti has stocked her story with not one, but several reluctant heroes whose short comings provide ample conflict and tension, super powers or not.

At times, dispatching zombies is done with gory, gloopy revelry and it seems like good, if not sanitary, fun.  The danger is never glossed over, but rather our heroes’ wild card abilities are put to practical use. Buttressing that visceral dynamic is an emotional one.  It’s represented as an interesting and omnipresent tug of war going on in Ashley’s head between the idea of who these zombies once were — mothers, fathers, husbands, wives, children, etc. — and the objectified bags of rot they’ve become.  It’s one of several compelling dichotomies in Plague Town and these allow for a better-than-expected range of emotions regarding the well-worn zombie apocalypse scenario.

Fredsti, who’s been involved in several movies, shows her movie-biz bona fides in a few ways.  Plague Town is chocked full of movie references, some of which are hysterically funny.  Tremors, The A-Team, SyFy originals, Evil Dead, you name it.  And style-wise, the book reads cinematically.  The set pieces are described in vivid detail, realistically rendering the action at those locations in the mind’s eye.  And the narrative structure is composed like that of a classic screenplay.

Of course the book is not without its faults.  Let’s start with a shallow one: If I knew nothing about this book other than what’s on the cover, I’d never even look at it twice.  Here’s something a little less superficial: While the A-list characters are multidimensional and vivid, some of the lesser characters are written as if they know they’re merely part of a peripheral supporting cast.  Also, a couple of the larger plot twists are telegraphed and easily spotted early on.  And finally there are some plot contrivances and some elements of the story that are ridiculously over the top, but the tone and voice of the narration is super entertaining so it’s not difficult to forgive these problems.

While some books emotionally resonate long after they’ve been put back on the shelf, they’re usually challenging and a bit of an endurance test.  Plague Town isn’t what I’d call an incredibly moving book, but it’s an instantly gratifying, blazing fast read and that speaks to its cinematic, fast paced approach to storytelling.  There are popcorn movies, to be sure, and Plague Town could be considered a popcorn book, in the very best sense of the phrase.  It’s a little rough around the edges in spots, but it’s always compelling.  Ashley Parker is an infinitely relatable character, honestly drawn, and always entertaining.  So, add Plague Town to your to-read list lest you be cursed to stumble about, craving the brains that only books like this one can provide (like a zombie).