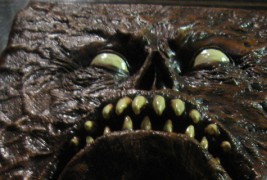 Clerical Terrors: How to Translate a Tome of Eldritch Horror Without Looking Like a Dumb-Ass[1]

Arabic is a nuanced language of great complexity, and mistakes are easy to make for the newcomer.  I learned this the hard way when I asked a pharmacist for insecticide because we had a problem with buffaloes, or told a barista in a Cairo Starbucks that I wanted a garbage croissant, or even when I wished a nice gentlemen in the street a morning full of dick (which, depending on your preference, might not be such a terrible thing).  If even relatively sane, linguistically-conscientious souls such as myself make regular mistakes, surely mad cultists and gibbering hierophants of the Elder Gods don’t produce the most exact translations.  If the words for “pleasant” and “dick” are just one letter away from each other, how can we really take Ludwig Prinn at his word on the “Saracen” ideas in De Vermis Mysteriis?  Did Comte d’Erlette really understand the various cryptic sources of his Cultes de Goules?  How do we know we’re getting the most sanity-blasting bang for our eldritch buck?

In American University in Cairo’s rare books room, I was recently privileged with the opportunity to not only see but inspect John Vere’s 1790 Commentary On the Book of the Arab, and Moft Efpecially the Olauf Wormiuf Tranfcription, To Whit, the Necronomicon.  After stumbling for several hours over those annoying f’s in place of s’s, I came to some startling and dream-haunting conclusions.  But first, a bit of history:

Lovecraft states that the Necronomicon, originally entitled Kitab al-Azif and written by the Yemeni poet Abdul Alhazred in the 700’s, went through several translations, each poorer than the last.  Theodoras Philetas rendered the book in Greek, which Olaus Wormius then transcribed in Latin and John Dee translated into a very watered-down English copy.  In the ‘70’s, some New Age poser who called himself Simon published a thoroughly unrelated Necronomicon claiming similarities between the so-called “Lovecraft Mythos” and Sumerian myth.[2]  None of these latter-day editors, as far as is known, had any knowledge of Arabic,[3] and the original Kitab al-Azif disappeared centuries ago.

So what to make of the Vere commentary?  John Vere (1751-1792), a former East India Company merchant and polyglot, claims to have examined the Kitab first-hand, though I am intensely dubious of that possibility, especially given the mental instability that plagued him towards the end of his life.   His rather spectacular death (he was found, perhaps a suicide, hacked to pieces in his Alexandria study) has generally been a mere footnote in the Necronomicon’s history, and indeed Lovecraft doesn’t mention him at all in his brief “History.”  Still, Vere did understand Arabic to some extent, and based on his analysis (and cross-reference of several other works obtained through some difficulty, both legal and otherwise), I have made some tentative though fascinating paralinguistic discoveries.

“Shoggoth” is a pun.

The highly doubtful Dyer narrative (edited and published by Lovecraft under the high-flown title “At the Mountains of Madness”) mentions the so-called “shoggoths,” protoplasmic entities capable of changing shape, producing limbs and organs from their churning flesh, and decapitating their prey.  The “shoggoths” rebelled against a race called the “Old Ones” who seem to have ruled the world from Antarctica, if the ravings of a disturbed geology professor and his neurotic graduate student are to be believed (I suggest they be taken with at least a grain of salt).

Alhazred claimed that creatures as horrid as shoggoths had never existed except in the dreams of hashish-eaters.  But where did he get the word?  The Old Ones, if Dyer is to be believed, communicated by a whistling or piping, a mode of speech unlikely to produce a guttural term like “shoggoth.”  But careful examination (with some help from Vere) reveals that “shoggoth” has a very earthly origin.

The Arabic noun shaghab[4] (شغب) literally denotes a riot, with connotations of insurrection, chaos, and total disorder.  One needn’t be a student of Arabic to note the correlation between entities that rebelled against their masters and a term like shaghab.  But why would Alhazred choose to name the shoggoths thus?  Aren’t there better descriptors?  All sources dealing with these (probably fictitious) entities note their plasticity, their ever-changing shapes and rapidly-shifting, indeed riotous flesh.  Alhazred, true to his poetic background, confounded readers for thirteen hundred years with a simple pun.

“Cthulhu” isn’t the name of the speculative entity in the Thurston Manuscript, nor is “Azathoth” derived from “Azazel,” “Thoth,” “Astaroth” or any combination thereof.

H.P. Lovecraft was a deeply intelligent man, a born journalist and editor, and a prodigy in Greek and Latin, but his knowledge of Arabic was limited indeed.  While rightly bringing the world’s attention to the work of Thurston and Angell,[5] Lovecraft seems to have mistakenly believed the title “Cthulhu” to be a proper name—even one of extraterrestrial origin.  Nothing could be further from the truth, as simple logic will show.

According to previous research done by Thurston and Angell, based off the narrative of one New Orleans-based Inspector LeGrasse, the “Cthulhu” myth-cycle revolves around a dragon-like monster, imprisoned deep under the sea, who will one day rise when certain astrological pre-conditions are fulfilled.  “Cthulhu” speaks to his followers through telepathy.  And yet this telepathic communication seems to have produced a word as concrete and conveyable as “Cthulhu.”  Tellingly, the rendering “Cthulhu” is also found in Wormius’s medieval Necronomicon.  Whether you are credulous enough to actually believe in a dead squid-dragon god is your own business, but at least realize that whatever it may call itself, that name isn’t “Cthulhu.”

In Arabic, an extra vowel, –oo, is added on to the final letter of definite nouns (to put it crudely, we go from “man” to “the man-oo“).  The term قاتل (pronounced “Qatil“) is an adjective signifying lethality, murderousness, the propensity to end life.  القاتل (Al-Qatiloo) can be translated as “The Murderous One.”  Theodoras Philetas, in translating Alhazred’s book into Greek, likely left the original Arabic as an honorific–the same reason we refer to “Jesus Christ” not “Joshua the Annointed.”  Olaus Wormius, knowledgeable in Greek but not Arabic, likely came across the term and considered it a proper name.  In attempting to render the word in Roman letters, he came up with the reasonable but inaccurate “Cthulhu.”

Likewise with the vexed case of Azathoth, the “Daemon Sultan” of so many Lovecraftian incantations.  A certain friend of mine, the esteemed Chinese language scholar Matthew Flynn, suggested that “Azathoth” is cognate with “Astaroth” and “Azazel.”  While Mr. Flynn’s knowledge of the Chinese language is unparalleled, nothing could be further from the truth.  Vere hints (and I am inclined to agree), that the name of “Azathoth,” like “Cthulhu,” is a very garbled Latinization of an Arabic title.  Lovecraft, working with one Professor Wilmarth of Miskatonic University,[6] stated that Alhazred had chosen “Azathoth” as a term to disguise the true horror the entity he referred to.  But the nonsense word “Azathoth” scarcely fits with Alhazred’s proven (though eccentric) poetic genius.  Vere claimed (and I see no reason to doubt him) that the true term Alhazred used was Azal At-Tarah[7] (آزال الترح), or “The Eternity of Grief.”

“Abdul Alhazred” is a pseudonym.

It has been pointed out multiple times that “Abdul Alhazred” is a grammatically incorrect Arabic name.  “Abdul,” or عبد ال-, simply means “Servant/Slave of.”  You will hear people say that this couldn’t have been Alhazred’s name because those feisty Arabs bridle under the idea of being called “Slave.”  In fact, there are plenty of Islamic names that include “Abdul,” like عبدالله (“Abdullah,” “Servant of God”), or  عبد اللطيف (“Abdul Lateef,” “Servant of the Pleasant One”), or even  عبد الرحمن(“Abdul Rahman,” “Servant of the Merciful One.”)  All these terms refer to either God Himself or one of His ninety-nine names.  The problem here isn’t cultural, but grammatical.  “Abdul Alhazred” is redundant–“Servant of the of the Hazred.”

We can just shorten the name to Abdul Hazred (or, if you must, Abd Alhazred), but problematically, “Hazred” doesn’t mean anything either.  The best equivalent would be “عبد الهزارات,” Abd Al-Hazarat–“Servant of the Nightingales,” which ranks with “Simon” in terms of threatening titles.  Or does it?

Sources on the so-called “Cthulhu Mythos” consistently refer to music as a medium of communication–indeed, of transcendence.  We’re reminded of the piping “Old Ones” in Antarctica and the excitable Lovecraft’s “daemon flautists,” not to mention the anonymous narrative published as “The Music of Erich Zann.”  Even the original title of the Necronomicon, the Kitab Al’Azif (كتاب العزف) translates most directly as “Book of the Musician.”  Who are Alhazred’s “nightingales?”

Fortunately, we needn’t be as credulous in our approach to the poetry of Alhazred and his cohorts.  The “Cthulhu Mythos” forms a quaint but ultimately false legend cycle.  While linguistic study is always interesting, the hysteria regarding “nameless gods” is ultimately just so much Puritanism.  The serious scholar will, as I have done here, confront “Cthulhu,” “Azathoth,” “Nyarlathotep,” and all such bogeymen as simply myths with no more bearing on the modern world than Odin or Poseidon.

[Editor’s Note: Mr. Eden, shortly after the completion of this article, suffered a rather sudden shock of nerves. With no warning, on a sunny day on the Nile Corniche in downtown Cairo, Eden succumbed to a complete nervous breakdown, babbling to himself and pointing in abject horror at a point in the middle of the river and then began biting savagely at his own skin, seemingly in an attempt to gnaw off his own arm. For his own safety, Mr. Eden is currently confined in an insane asylum in Abbasiya, Heliopolis. We, the staff and contributors of Ravenous Monster, wish him and his wife our sincerest sympathies in these trying times. We neglect to wonder, as do certain callous persons, why Mr. Eden’s wounds produced not blood but a blackish, bubbling substance like oil, or how he developed the ability, seemingly as a result of his unfortunate breakdown, to speak flawless Classical Arabic and an obscure language known only as “Aklo.”]

[1] This article could not have been completed without Hans Weir and J.M. Cowan’s Arabic-English Dictionary.  Hear that, Old Ones?  It wasn’t just me.

[2] Which, name-wise, is only slightly scarier than Hubert. And save me all your, “But what about Simon Magus!” crap.

[3] I guess I don’t either, seeing as how I’m only in my third semester, but you’ll just have to bear with me.

[4] The gh is pronounced gutturally, as though gargling with water or some other, less nameable fluid.

[5] Published, unfortunately, under the sensational title, “The Call of Cthulhu.”

[6] I refer the reader to “The Whisperer in the Darkness.”

[7] The final “h” is aspirated and breathy, as though you are exhaling slowly in the face of unspeakable horrors.

6 thoughts on “Clerical Terrors: How to Translate a Tome of Eldritch Horror…”