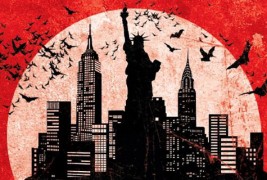 Highly referential fiction is a difficult proposition. Obviously, the main concern for any scribbler is the question of “Will anyone get my references?” Nobody wants to bash the reader over the head, but similarly, nobody wants to write something so occult that nobody picks up on it. After all, from the writer’s perspective, the point of writing in so many allusions is to show off education. It’s sort of like: “See, look how much I’ve read!” While it may sound completely self-serving (and it mostly is), there are people who do love it. For the more high-brow set, T.S. Eliot’s poetry is held in high regard because its many literary allusions are both difficult (thereby keeping the riffraff out of the club) and brilliantly used. For the more popularly minded, Joss Whedon’s Cabin in the Woods (a film that I loathe) is celebrated because of its many allusions to the popular horror films of the distant and not-so-distant past. Still, in both cases, there is reliance upon a well-versed audience, and when audiences aren’t aware of the allusions, referential fiction either falls flat or is forced to rely on its thin originality.

The other main problem with this type of production is its easy slippage into mere “fan fiction.” Now this term is a fairly new one, but nonetheless “fan fiction” has existed for a long time. But, with the advent of the Internet, “fan fiction” as a term has come to denote poorly written and terribly plotted pieces written by sub-literate amateurs. While most of these “writers” are mostly confined to blogs and threads, some have managed to break through to wider audiences. Sadly, some of them have even become successful (Fifty Shades of Grey, anyone?).

So, if we take all of this together, then we can see the daunting difficulty in trying to write something that relies on references and allusions. Kim Newman, an English author, critic, and film historian, is an adept when it comes to fiction that is heavy on allusions. In fact, his Anno Dracula series, which began way back in 1992 with Anno Dracula, presents an alternative history wherein the vampires of fiction, television, and film are real-life movers and shakers in a world also populated with other fictional characters made flesh. As can be guessed, Newman’s fiction is neither “literary,” nor is it for the Sunday fan of speculative fiction. To read Kim Newman is to take a walk through a brain and pen consumed by popular culture.

Newman’s latest – the awkwardly titled Anno Dracula: Johnny Alucard (Anno Dracula, 1976-1991) – is a four hundred page behemoth with a cast that includes everybody from the fictional Baron Meinster (the vampire antagonist from Hammer’s The Brides of Dracula) and Philip Marlowe (Raymond Chandler’s cynical, drunk, yet celibate private investigator) to real world figures such as Martin Sheen and Francis Ford Coppola. If this sounds slightly confusing already, then it would be in your best interest to not pick up Anno Dracula: Johnny Alucard (Anno Dracula, 1976-1991).

The plot of the novel is a winding one, and it involves a vast assortment of important characters. First, there’s Geneviève Dieudonné, a beautiful and ancient French vampire who is one of Newman’s rare original creations. Geneviève can be found throughout the Anno Dracula series, and in Anno Dracula: Johnny Alucard she once again plays the voice of reason and conciliation between humans and abhumans. Then there’s Ion Popescu, a former rebel vampire against Nicolae Ceaușescu (who was the real communist dictator of Romania from 1967 to 1989) and his repressive and anti-vampire regime. After stumbling upon the set of Coppola’s Dracula (which in Newman’s history was filmed in the 1970s and bears quite the resemblance to Apocalypse Now), the young Popescu decides to follow the filmmakers to the United States, where he transforms himself into Johnny Pop – the embodiment of late ‘70s decadence.

After meeting Andy Warhol at Studio 54, Johnny Pop rakes in the dough by selling a blood-based drug that gives regular joe humans the feelings and sensations of the undead. Pop’s many clients include the doomed couple of Sid Vicious and Nancy Spungen, as well as the assorted punks, disco fans, and other New York lowlifes. Oh, and Travis Bickle is his taxi driver.

Well, before long, Johnny Pop becomes Johnny Alucard (Alucard, which is “Dracula” spelled backwards, is a reference to both the 1943 film Son of Dracula and a character in Dracula A.D. 1972), a movie mogul obsessed with inheriting Count Dracula’s evil empire. This here is the rub of Anno Dracula: Johnny Alucard. There is quite a lot more to this story, but frankly it’s hard to “pick the raisins from the cake.” Newman’s newest novel is episodic and at times hard to follow. Plus, because Newman relies so heavily on allusion, Anno Dracula: Johnny Alucard is kind of a slough that forces readers to abuse Google, whether or not they are a horror aficionado. 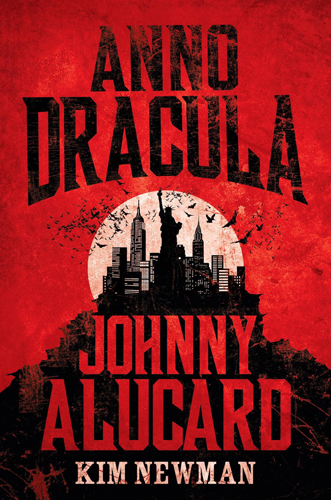