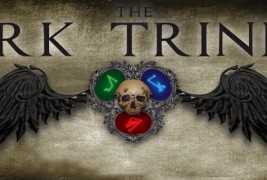 Steven Till is a creative jack of many trades, from music to graphic design.  But none of these artistic outlets satiated Till’s love of all things horror until he tried his hand at writing.  It didn’t take long before his short stories were winning awards and his self-published work began to cultivate an audience.  As a newcomer to writing for an audience, Till’s been busy enjoying the ride.  Pending his upcoming appearance at Horror Realm in Pittsburgh this July, Till opened up to Ravenous Monster about his journey of becoming a writer, what types of terror make him tick, and why great whiskey is an essential part of his process.  Read on, Horror Fans….

Steven Till: Hi everybody! Thank you for having me here at Ravenous Monster! It’s an honor and a pleasure to be here with all of you.

I have danced with many passions throughout the course of my life. I’ve been a musician since I was a young lad and have been classically trained in trumpet and trombone, as well as composition. I hold two degrees in animation and graphic design and have worked as a professional designer for the past 15 years. One thing that I’ve come to realize while on my creative journey is that there is one passion that has remained a constant. Horror. I have always been drawn to the bumps in the night, the creepy and the macabre. I’ve always felt the pull to the dark and unknown. I now begin a new chapter in my life as I start to write tales of the weird and terrifying. I feel as though I’ve finally found my calling and I am very excited to walk this path with you as we seek to find the cause of those haunting noises that moan in the shadows.

RavMon: Many people write but never allow their works out to the public, considering it a huge risk. What made you want to face public scrutiny and release your own?

ST: I feel that, first and foremost, an artist should create for the sole benefit and enjoyment of one’s self. A writer is no different. An author should write for their own pleasure. They shouldn’t write for the masses and they shouldn’t compromise their vision because they think that’s what others want. Making their words available to the public is no small decision. The fear of rejection and/or judgment often deters many talented writers from ever going public with their work. I myself don’t look at it that way.

I share my writing because I want to give something back to the wonderful horror community that has given me countless chills and thrills. I knew going into it that I can’t and won’t please everyone. There will always be critics, there will always be those who want to beat you down and there will always be naysayers who will try to discourage you. On the flip side of that coin, there are also the fans, the supporters, and the other creators who surround, support, and nurture a writer’s stories. It’s important for an author to remember that their stories are their creations. They are in control of what happens in them. They are the gods in the universe they create. I share because I want to entertain. I want to evoke a reaction from my readers. And, if in the process I am able to inspire someone to create something new, then I feel I’ve done what I’ve set out to do. 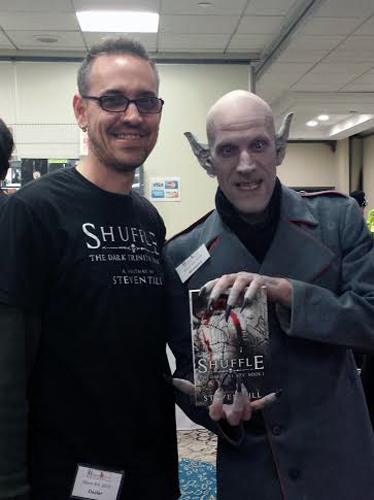 I encourage everyone to create something. Anything. Whether you’re a musician, an artist, a dancer, a writer…it doesn’t matter. Create something and put it out into the world. Don’t be afraid of failure. Failure is merely a vehicle for learning. If you fail, you learn how to do better the next time. Put your work out there. Be an inspiration to someone. And no matter what, never, never, never give up.

ST: I credit the great George Romero for instilling in me my love for zombies. I remember watching Night of the Living Dead as a kid with wide-eyed wonder. Stephen King is responsible for my love of reading. I remember picking up my mom’s copy of IT and reading non-stop. I never asked to have a clown at my birthday after that!

When I sat down to write Shuffle, I wanted to re-define some of the classic monsters I grew up with. Watching Bela Lugosi in the iconic Dracula and Lon Chaney Jr. as the Wolfman, made me clamor for more. There’s been an unsettling trend today as young horror fans have been convinced that vampires should sparkle and werewolves should find a moody girlfriend. Mainstream Hollywood (yes, I’m talking to you Universal) is bringing the classic monsters back, but they’re attempting to make them action heroes, instead of the mysterious figures they started out as.  I wanted to make monsters scary again. I set out to bring back the adrenaline that is missing from so many of today’s horror efforts.

I’m also a huge fan of comedy. I like to laugh and I’m not afraid to admit it. One of my favorite authors, J.A. Konrath, has written and contributed to several horror tales that I’ve thoroughly loved. He is able to inject hilarious moments in his stories that provide a great counterpoint to the scary and gory. I very much wanted to do the same with Shuffle. I made it a point to write a page-turner, with a pace that borders on neck-breaking. But a writer must give the reader a break from time to time to catch their breath and re-group. To prepare for another injection of tension and suspense. I thank Konrath in showing me how to weave humor with the terrible, to give the readers more than just a scary ride.

RavMon: Why horror as opposed to other genres?

ST: Love stories are great. Action stories are fun. Dramas can be interesting. They all can evoke emotion from the reader. Horror, however, is visceral. It taps into one of our most basic instincts. Survival.

Some people get their thrills by skydiving, rock climbing, or bungee jumping. I get a rush from horror. I believe that fear is the only emotion that is pure. There’s no mistaking it and there’s no faking it. Fear can drive a person to do either great or horrible things. I love to watch and read about how people make that decision. How do they choose to channel their fear?

Horror comes in a lot of different flavors and I love that. Sometimes I feel like a hack-and-slash story. Something filled with so much gore it turns your stomach. Other times, I feel like a psychological mind-fuck, where my perceptions of reality are challenged. Horror is pliable. It’s flexible and can be molded to fit a variety of situations and at the root of it all is adrenaline, survival, and above all else, hope. 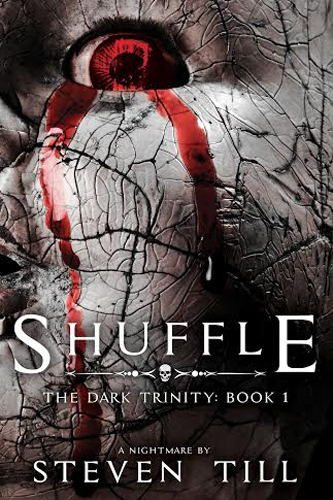 RavMon: Would you consider writing in a different genre? If so, what?

ST: I have always had a love for fantasy. I remember reading Tolkien as a kid and being completely transported into his world of Middle Earth. The different races fascinated me and the never-ending battle of good versus evil was intriguing. Seeing Peter Jackson’s vision come to life on the big screen was thrilling and awe-inspiring and I’ll even admit to dabbling a bit with Dungeons & Dragons.

I would consider writing a fantasy tale at some point, although I must admit that I would most likely try to instill some gore into it. After all, horror is in my blood.

RavMon: Do you have any type of writing ritual?

ST: I subscribe heavily to the Hemingway method of writing. Write drunk, edit sober. I truly believe that the most honest writing can only come from uninhibited writing. When I sit down to work on a story, I always have a glass of whiskey at my side. I also must always have music playing in the background. Something without words. Usually, it’s classical. It’s not uncommon to hear Beethoven, Vivaldi, or Paganini coming from my apartment when I’m hard at work on a scene.

Don’t get me wrong, kids, I am not trying to advocate alcoholism. In fact, I rarely drink when I’m not writing. But sipping on some great whiskey certainly allows the words to flow more freely and allows me to focus on what my characters are doing instead of what my readers will think.

RavMon: Finally, what’s next for you and where can readers and minions find you?

ST: Currently I’m hard at work researching and outlining Lunae, the second installment of the Dark Trinity. I’m trying to have it finished and released this December. In the meantime, I’m getting some great stuff lined up for my next public appearance at the Pittsburgh Horror Realm, July 24-26th. I will be printing my award-winning short story Inversion and giving it away for free at the con. It will also be sporting a limited-edition cover.

I’ve also been chatting with an extremely talented illustrator and artist by the name of Matthew Spicer. There may be a collaboration on a graphic novel in the future, stay tuned for more on that.

The best way to keep up to date on what I’m up to is at my website, steventillonline.com. From there you can follow me on the various social networks, purchase my books, and find out what makes me tick.

Thank you so very much to Tiffany and Ravenous Monster for allowing me the time to chat with you today. I am always humbled by the spectacular fans of this genre and am proud to stand among you!