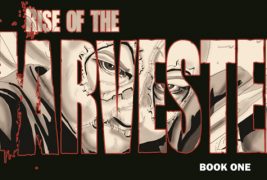 The first thing you should know about Steve McGinnis is that he’s a fantastic artist.  His work has been featured all over the place, from Fangoria and Gorezone to his own design outfit Digital Impact Graphics.  And that’s what makes Rise of the Harvester: Book One an interesting piece to review—not only is McGinnis responsible for its artwork, but he also wrote the graphic novel with some assistance from editor Ryan M. Andrews.

So, how well does McGinnis transcend two very different creative mediums?  Pretty well, if not without some bloody hiccups.

Rise of the Harvester begins inside a prisoner transport van in which three correctional officers and one very large, unconscious prisoner are riding.  The driver is full of flashback-worthy exposition about their prisoner—the titular Harvester—and he precedes to spin tales of murder and supernatural terror to his front-seat passenger while their third cohort and Mr. Harvester snooze in back.

As the van driver talks we leap back in time to the year 1905 in “a little forgotten hamlet called Brantwood” courtesy of the aforementioned, tried and true narrative shortcut—the flashback.  Here, we meet baby Samuel.  Samuel is a huge baby who subsequently becomes a huge kid.  He also has a proclivity for killing things, e.g., rabbits, cats, dogs, birds, even teddy bears get de-stuffed.  Eventually young Samuel starts killing his play dates and when the town’s folk realize it, they show up at his parents’ residence with pitchforks and torches.

Samuel, ever friendly with his father’s scarecrow, makes a break for the field and hides inside his inanimate pal/every bird’s worst nightmare.  From his vantage point he watches his house burn to the ground.

And like a guilty version of Bubba from Dark Night of the Scarecrow, Samuel, dressed in full scarecrow garb, makes his way back to the glowing skeletal embers of his home where he begins slaughtering the stragglers from the lynch mob before getting killed himself.

His body is buried in a field and left to rot. 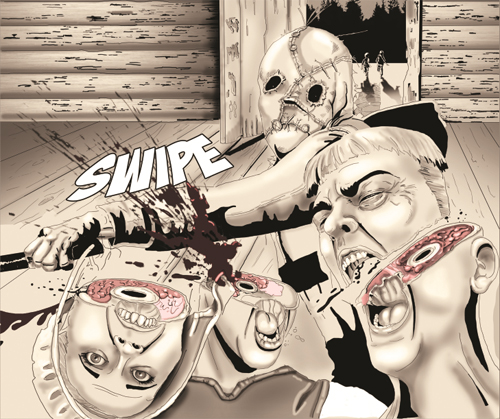 As McGinnis’s debut graphic novel is a slasher flick—if “flicks” were paginated and made of paper—it will come as no surprise that Samuel doesn’t remain dead or buried for long.  He does, however, continue growing larger and dressing in fly scarecrow gear for years to come.

When the story finds itself back inside the transport van…well…bad things happen, but you’ll have to buy Rise of the Harvester: Book One to find out what they are.

The easy part of this critique is the artwork.  It’s great.  McGinnis’s style is a blend of realism and a classic comic book aesthetic, or as McGinnis puts it, “…whimsical.”  Whimsical hits it on the nose.  His style is tailor-made for Halloween time.  Here, the gore is graphic and the action within each panel is kinetic and cinematic.  It’s a pleasure to look at.

From a storytelling angle, McGinnis does a nice job laying out the Harvester’s mythology which is arguably the defining characteristic of a good slasher story (other than the guy/gal in a mask slaughtering people).  It’s risky to essentially occupy his entire first book with a narrative device like the extended flashback, but lucky for McGinnis—and even more so for us—the comic book medium is a bit more forgiving of that type of structural faux pas than are movies and television.

The writing itself is a bit sloppy at times.  I started to wonder if maybe Samuel killed all the commas too.  This prose could certainly benefit from more polish, but the bones are here for a really fun, freaky serialized story.

All your favorite slasher tropes are slathered all over every page and there’s a great hook which is what a first volume is supposed to deliver.  I’ll be tiptoeing my way through Book Two whenever it becomes available.

Rise of the Harvester: Book One is available from Short, Scary Tales Publications (http://www.sstpublications.co.uk).