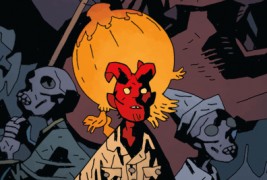 “German expressionism meets Jack Kirby.” That’s how kooky old Alan Moore once described the artwork of Mike Mignola, the creator of the demonic hero Hellboy. Ever since Seed of Destruction was published in 1994, Mignola has been at the top of the heap insofar as writers and artists are concerned. His style, which does indeed embrace both expressionism and the older mode of comic book art, is sparse and not overly reliant upon dialogue. Mignola has the ability to go entire panels without words, and even when he does include a few gasps or two, they rarely go above the three line troika that so many screenwriters feel lashed to.

To the chagrin of many a fanboy, Mr. Mignola is now mostly concerned with writing. Only on rare occasions does he ink and write a Hellboy script, so, as a result, a slew of Hellboy titles have been left to the hands of other artists. The best one of the bunch—Duncan Fegredo—is in many ways a Mignola clone. But, in saying this, it should be noted that Fegredo’s art isn’t a mere copy of Mignola’s more abstract style. Like Mignola, Fegredo is a master of dark contours and bleak spaces. Conversely, both Mignola and Fegredo are capable of delivering panels that exude a lush minimalism, almost as if these panels are forgotten or barely remembered dreams (or nightmares).

Where Fegredo removes himself from the shadow of Mignola is in his more solid line work and his smaller emphasis on the type of Cubism that Mignola uses in order to represent the human and inhuman figure. Whereas Mignola is immersed in a world of muted palettes and silent movie-like overtones of sepia and one-color camerawork, Fegredo is more interested in presenting a chiaroscuro wherein emotions are mirrored by their corresponding brightness or darkness. Add in the brilliant colorist Dave Stewart to this mixture, and you now have several reasons for purchasing any title with the names “Mignola” or “Fegredo” on the cover.

The Midnight Circus begins at the Bureau For Paranormal Research and Defenses’s headquarters in Fairfield, Connecticut. It’s 1948—the war is over, the resurrected American dream is on the horizon, and Hellboy is just a little boy. As a little boy, Hellboy is prone to whimsical notions of adventure and escape. His decision to sneak a smoke outside of the gates leads him to discovering that the circus is in town. Not just any circus, mind you; this one is truly fantastique.

As Hellboy follows a clown drummer and his dog to A.T. Roth’s Circus Spectacular, Professor Trevor Bruttenholm, Hellboy’s minder and father figure, is agonizing over the prophecies concerning Hellboy and his feared right hand of doom. This worrying makes him unaware that Hellboy has run away to the circus. 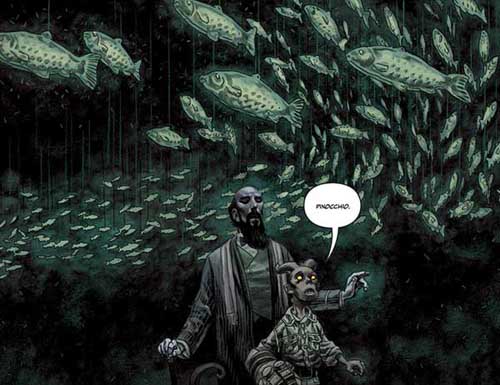 For us readers, we share Hellboy’s wonderment as he first navigates through the nighttime circus. The tents are abandoned, and yet the animals are still around. It looks almost as if the circus has yet to open, or, on a more fascinating note, the circus has been waiting for its only intended patron—Hellboy.

The strange carnival workers, who more or less recite the words of Lord Byron’s “Manfred,” appear as if they are ghosts, and The Midnight Circus takes its more menacing tone after Hellboy locks eyes with one of these apparitions—a beautiful, horned, and red-skinned elephant rider. There are some sexual innuendoes in this graphic novel, especially when Hellboy meets the tall proprietor who mans a booth that advertises itself as “Gentlemen Only: Lust and Desire.” But to call The Midnight Circus “racy” or “prurient” would miss the point. More than anything else, The Midnight Circus is about the horrors of growing up and the horrors of being forced to fulfill some unknown destiny. In the case of Hellboy, this destiny is the destruction of the world, so you can understand why the maturation process is a frightening endeavor for the tyke.

Throughout The Midnight Circus, flashbacks come into play as both narratively important interludes and as excuses for Fegredo to show off his abilities with lighter tones and sunnier scenes. In particular, one flashback has Hellboy discovering the story of Pinocchio, the puppet who wanted to become a real boy. This reference to impossible desires is quite expertly applied to Hellboy, a demon who seeks a human existence. Forces from the outside do not want Hellboy to forgo his demonic ancestry, and the most luscious panels of The Midnight Circus come when the cruel circus master shows Hellboy a false depiction of his fate. 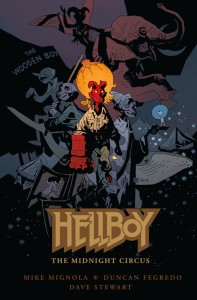 As with Buffy the Vampire Slayer, the name Hellboy often leads snickering critics to discard it as so much pulp trash. The truth is that Mignola’s flagship creation has produced some of the slickest and best-written work in the recent history of comic books. More importantly, Mignola’s deep appreciation for literature comes through on each page that he writes, and as a result, The Midnight Circus, which is just another amazing addition to the Mignolaverse, is a love letter to fiction. Also, given its warm ending, The Midnight Circus is also a work of horror fiction that upholds life and happiness. There is no nihilism here, plus the almost Victorian quality of The Midnight Circus highlights the traditionalism that sits within the hearts of its creators. This is a praiseworthy piece and a fine graphic novel. Hellboy: The Midnight Circus can easily be consumed in one sitting, but its powerful and emotive scenes will haunt you for a few contemplations to come.