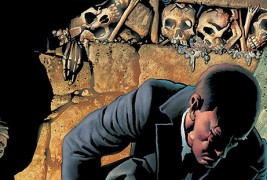 A lone rider traveling “(d)uring the whole of a dull, dark, and soundless day in the autumn of the year.” This is how Edgar Allan Poe’s The Fall of the House of Usher begins. Since its first publication in 1839, Poe’s macabre masterpiece has been considered one of the founding lights of American horror fiction – a reputation that is both well-warranted and generally agreed upon. Because of this status, The Fall of the House of Usher has been adapted numerous times, from Jean Epstein’s 1928 silent horror film, La Chute de la maison Usher, to Roger Corman’s House of Usher (1960), arguably Corman’s best Poe adaptation (although I’d personally give that award to the dazzling The Masque of the Red Death [1964]) and one of Vincent Price’s best performances.

There is something disturbingly primal about Poe’s narrative, something akin to William James’s dictate about the “aboriginal capacity for murderous excitement.” In every adaptation, from Epstein’s surrealist and cerebral silent to Corman’s gaudy and garish drive-in thriller, the diseased House of Usher still manages to come off as the genus loci of ancient horror, almost as if the House of Usher was in reality the House of Atreus.

Now, in 2013, there is a new adaptation of Poe’s classic, and this time around the pen behind the remake is the legendary Richard Corben. Corben, who has been a comic book artist, illustrator, and writer for over forty years, has seen fit to once again adapt Poe’s seminal story, this time doing it as both the writer and artist for Dark Horse’s Edgar Allan Poe’s The Fall of the House of Usher. Much like his adaptations of H.P. Lovecraft, Corben’s take on Poe is uniquely his own, with characters exuding a sort of ‘70s sleaze that has stuck to Corben’s art ever since he inked his first semi-pornographic page. Corben has always been known for (and conversely chided for) the abnormally large…um…personalities…of his female and male characters. Corben’s The Fall of the House of Usher is no different, but the central cast of Allan (Corben’s version of Edgar ALLAN Poe’s unnamed narrator), Roderick and Madeline Usher are all exaggerations in the best ancient tradition. 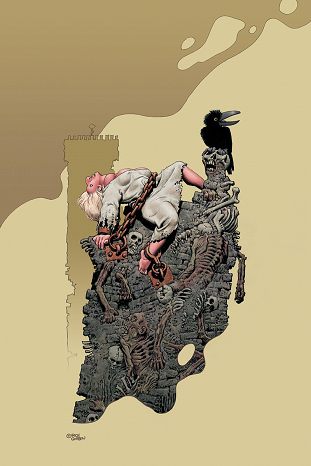 In the first issue, a one-eyed and cloaked wanderer introduces us to the main protagonist, Allan. This third-person format immediately breaks off the links between Corben and Poe. While the latter storyteller wanted his audience to question the sanity of everyone involved, even his first-person narrator, the former artist merely wants to catalog and observe the precipitous decline of the Usher brood. This change was done intentionally, and as Corben himself writes in the back of the first issue, “(h)aving done adaptations of The Fall of the House of Usher before, I was determined to make this one different in some ways.” Besides being a well-known and well-beloved artist, Corben is also apparently a talent when it comes to understatements; for his adaptation of Poe is even less faithful than Kanye West. The new narrative format and the creation of Allan aside, Corben’s The Fall of the House of Usher makes other dramatic departures from the 1839 original.

For starters, rather than taking place in a moribund, yet decidedly natural setting, Corben’s landscape is full of unimaginable fantasy and gnarled, hideous creations. From the Usher mansion to the characters themselves, The Fall of the House of Usher embraces a sort of obscene Cubism that perverts the human and natural form to their grossest limits. In typical Corben fashion, this perversion is most visible in terms of sexuality and sexual representation, and The Fall of the House of Usher is awash in bare breasts and uncovered vaginas.

It is in this way that we first meet Madeline, Roderick Usher’s sister and obsession. After showing Allan some sketches of a naked woman, Roderick reveals that his sister Madeline is his inspiration. When Allan is shown into the quarters of Roderick’s naked muse, the true grotesqueness of the Usher relationship begins to sink into the reader’s head. The Usher incest is made all the more disturbing due to Corben’s decision to give both Roderick and Madeline the same distinctive nose – a Roman nose that is a blend between a caricature of an artist and a pugilist. The fact that Corben’s Madeline is also mute not only further highlights the type of rape that is at the heart of the tale, but it also helps Corben to slightly stick to the original formula (which barely ever shows Madeline and never lets her talk).

After laying the creepy groundwork in the first issue, Corben’s The Fall of the House of Usher really takes off in the second issue, the final installment in the brief series. In the second issue, Madeline is buried in the family’s crypt after succumbing to a sudden ailment caused by the completion of Roderick’s portrait of her. Allan, the archetypal masculine male hero, knows that something is fishy, and decides to investigate. What he finds is that Madeline was buried alive by Roderick and his butler Webber (a character clearly based on Erich von Stroheim’s Max in Sunset Boulevard [1950]). The bloodied body of Madeline angers Allan into vengeful action, but Allan’s wrath is forced to also deal with the destruction of the Usher mansion, which is caused by a lightning strike to the house’s gray stones.

As the second issue races towards its conclusion, Corben’s writing declines as his art improves. The reader must have a bifurcated mind to be able to enjoy the final issue of The Fall of the House of Usher, what with its violent, expertly-designed art and horrendous, anachronistic dialogue. By the time that it is revealed that Madeline is somehow spiritually connected to Roderick’s painting of her, Allan and Roderick have both descended to the level of stereotypes, with the former becoming a weak, hysterical loverboy, while the latter has become a full-fledged action hero with all the laconic, cool lines of tough guy lingo.

The Fall of the House of Usher, Issues #1 and #2 are currently available from Dark Horse Comics.