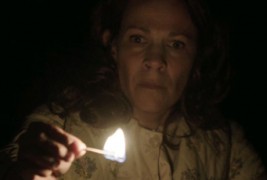 The Conjuring hits on all the haunts….

James Wan, your seat is ready.  Following up the widely applauded INSIDIOUS should have proved to be much more difficult for the man who brought us gore by the gallons with the SAW series and buckets of heebie-jeebies with DEAD SILENCE.

Yet, here I am proclaiming Mr. Wan the reigning master of Hollywood Horror.  It should have been a tad more difficult to make audiences jump with the same formula that has already provided so much success in the past.  It seems so easy for Wan, so why is it so difficult for practically every other major director to nail the genre?  The answer is simple—atmosphere, camera angles and fantastic acting is everything.  CGI and the red stuff can take a back seat if the film’s story can motor audiences through a 112-minute fright fest.  THE CONJURING may not break too many rules within the genre, but damnit do Wan and writers Chad and Carey Hayes make it work, seemingly with ease.  Take your seat at the throne, Mr. Wan.

THE CONJURING doesn’t venture too far off of the familiar ground of a haunted house film.  A large family (husband, wife and five daughters) moves into a massive house out in the middle of nowhere.  The family dog refuses to enter the home.  Strange occurrences lead the parents to believe maybe it isn’t just a faulty furnace or drafty windows causing the late night chill in their home.

However, it isn’t your average ghost lurking in the foyer closet here.  When it’s realized that there is a demonic force at play here, thanks to Mrs. Warren’s clairvoyance and Mr. Warren’s demonology expertise, it isn’t just the family that’s afflicted.  No…no, shit gets crazy for everyone from the Warren’s daughter to any poor bird that decided to follow the jet stream above the Perron residence.  Again, we’ve seen it all before: possessed dolls, creaky floorboards and makeshift ghost hunting traps, but it all works and while Wan is the conductor of this creepshow, there are other reasons the picture keeps audiences on the edge of their seats from start to finish.

Lili Taylor and Vera Farmiga steal the show, not only perfecting their roles but injecting an emotional depth that unfortunately doesn’t resonate in many horror films these days.  You truly feel for Carolyn (Taylor), the haunted mother, as she desperately seeks answers and tries to fend off the evil that has latched onto her family, much like it was easy to root for Taylor’s excellent work in the not-so-excellent 1999 ghost flick THE HAUNTING.

Farmiga plays renowned clairvoyant Lorraine Warren and there simply are not enough good things to say about the job she does.  As the gifted but tormented clairvoyant, Farmiga was a fantastic selection by the casting department for this role.  From her piercing doe-eyes to her fierce maternal instincts both towards her own daughter and the five girls dealing with the evil manifestation within the haunted house, Mrs. Warren couldn’t have been portrayed better.

Patrick Wilson (INSIDIOUS, INSIDIOUS 2) has become a Wan favorite and he always brings the goods.  With just enough of a slick, almost bad ass, streak to his characters to go along with a sympathetic and loving overtone, Wilson plays Ed Warren.  The chemistry between Wilson and Farmiga onscreen is palpable and really sells the macabre matrimony that the Warrens have shared for over fifty years.

Ron Livinston plays Roger Perron, husband to Carolyn.  Livingston provides a sympathetic father figure, albeit one who probably should have suggested the family sleeps in his big rig once things got creepy.

The girls (Shanley Caswell, Hayley McFarland, Joey King, Mackenzie Foy and Kyla Deaver) are all cute young ladies whom any set of parents would be proud to call their own, but they aren’t a focal point of the movie.  And, ladies and gentlemen, that is quite a refreshing detour from your stereotypical haunted house horror film.  Sure, the youngest sees the ghost of a young boy before anyone else does.  Yes, one daughter gets woken up in the middle of the night on a few occasions by a grumpy spirit.  There’s even a sleepwalker amongst the siblings.  But they don’t run the film and that’s a breath of fresh air.  Of course, when your leading ladies are Taylor and Farmiga, there really is no need to crutch off of cheap scares with a couple of kids.

The writing tandem of twin brothers Chad and Carey Hayes didn’t have much of a track record prior to THE CONJURING.  The duo had helped Hollywood churn out such clunkers as THE HOUSE OF WAX remake (a downright abomination on the genre), THE REAPING and WHITE OUT.  There are plenty of nods to the likes of POLTERGEIST and such in this film, and, sure, most of the material was already there thanks to the fact that this is a film based on true events, but kudos for a job well done nonetheless.  The characters are personable, even the sidekicks like the skeptical police officer and over-eager young assistant.  The pacing of the film is one of its strongest aspects, with the true events and back story sandwiched perfectly in between the thrills and chills.

Wan excels here in the same spots and in the same ways he has helped propel his other vehicles over the years.  Shadows, lighting and camera angles are Wan’s best friends as a director of the spooky stuff.  One scene in particular practically earns the flick a rave review by itself—following an eerie paranormal experience, one of the family’s daughters decides to peek under the bed.  Alas, nothing but dust bunnies and the hardwood floor.  But it’s the journey back upright that really tightens the strums of tension. The camera slowly rolls upward from upside down, giving the audience a brief yet all-too-long moment of dread as you can’t quite get your bearings straight while the picture returns back to its upright position.  As if that weren’t creepy enough, the scene continues with the girl hyperventilating on her bed, clearly seeing something that we cannot.  When her sister wakes up and tries to convince the freaked out sibling that nothing is in the corner behind the bedroom door, arguably the most nerve-rattling two minutes of the film ensue.  Again, shadows and lighting and fear of the unseen.

While the ending may or may not leave a little to be desired (is it really all over?), THE CONJURING, as a whole, is one spooky good time.

3 thoughts on “The Conjuring Movie Review”