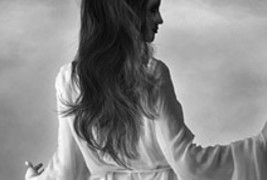 I always say that the great thing about independent art of any kind is the lack of restraints imposed by studios, publishers, record companies, and the like.  I have to say that The Story of Her Holding an Orange is one of the more unique and interesting independent books I’ve read lately.

Like the book Penpal that I reviewed, The Story of Her Holding an Orange had its start on Reddit as part of their NoSleep community boards.  The book tells the story of a young man who, at the age of 17, found himself being followed by a beautiful, though odd, woman who happens to be a friend of his mother.  Each time the young man and the woman cross paths she produces an orange, imploring that he takes it.  It seems like an innocent enough request, but the woman’s entire demeanor changes when she asks.  It’s as though another being has taken over her.  The story continues when the young man goes away to college and believes that he has escaped the woman and her odd request, though that ends up being far from the truth.

Milos Bogetic has written an unusual story.  In the introduction, he explains that this is a true story that happened to him and then he proceeds to tell the story in the first person.  It’s Bogetic’s writing style that sets this book apart.  He makes no effort to “pretty up” his work and he openly states this.  In fact, it seems that it’s actually the first draft.  For most stories, this would not be a good thing, but for this particular one it actually works better than if the author had tried to edit and re-edit before publishing.  Now, were there times in the story when I had wished for more explanation or detail?  Sure, occasionally.  But in most respects, the lack of explanation actually adds to the story’s intrigue.

The Story of Her Holding an Orange is one that needs to be taken as is.  If read while picking apart the prose or plotline, you’ll probably have a hard time enjoying it.  It’s a very short read with the physical book being only a little over a hundred pages.  If you have some time to kill and want a quick, easy read that’s different from a lot of books out there, give this one a try.

Check out The Story of Her Holding an Orange at Amazon.  And check out Milos Bogatic’s Facebook page. 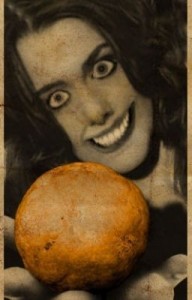