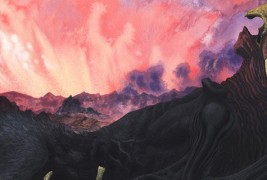 If you humanoids are inclined to hear classic tales of terror in spoken form, you can spend hours wandering the digital catacombs of YouTube and other such websites and find the works of Poe, Lovecraft, King and more. The quality of these verbal frights varies from excellent to something more hideous than the monsters described in the stories. However, your chance to actually own horrors of the spoken word in physical form was fairly remote. Until now.

To remedy this situation we now have Cadabra Records, who plan on releasing many spoken terror classics on vinyl in the upcoming months. They’ve already made their initial foray into the market with a sampling of macabre vignettes by famous horror artist Lee Brown Coye, entitled Where Is Abby? And Other Tales. I’ve reviewed that effort here at Ravenous Monster already.

That seemed to be the appetizer before the feast, which Cadabra now has prepared for us ghoulish connoisseurs of the frightful. They have created a lavish vinyl release featuring two sinister stories from the Old Gentleman of Providence himself, H. P. Lovecraft. 2015 marks the 125th birthday of Mr. Lovecraft and it is very fitting indeed to hear well-done spoken word versions of The Hound and The Music of Erich Zann in a very handsome vinyl package.

Cadabra has really upped their game with this release. Where Is Abby? And Other Tales had very plain spoken narration by Lee Brown Coye’s son Robert, with no sound effects or musical accompaniment of any kind. Given the more folksy, homey style of Coye’s macabre tales, that seemed a fitting approach to take. But the grand cosmic horror of H.P. Lovecraft demands a more lavish treatment. And you get it here!

Both stories are narrated by Andrew Leman, an experienced stage and voice actor. His expert diction and mastery of emotional inflection are evident throughout the album. He handles Lovecraft’s ornate and sometimes complex prose with ease…not an easy feat…and his pronunciation of difficult foreign names and phrases in spot on. More importantly, there is a real feeling of dread and apprehension in his reading. The Hound, in particular, is full of fear and horror from beginning to end. Leman’s work is a quantum level above Robert Coye’s on Where Is Abby? And Other Tales.

The Music of Erich Zann is generally considered the more classic of the two tales, but my preference is for “The Hound”. Neither story is exactly a breezy stroll through light entertainment, but the aura of impending doom and morbid decadence surrounding “The Hound” is almost palpable. I would put it only a hairs-breadth behind the greatest of Lovecraft’s tales, The Color Out of Space, in terms of inexorable atmosphere.

The story itself could hardly be more macabre. Leman’s narrator is a young and amoral collector of ghoulish memorabilia who, along with his friend and fellow devotee of the sinister, has created a veritable shrine of death and evil in a remote country house. These two young layabouts seem to be independently wealthy with no need of a job, as most of Lovecraft’s protagonists are. The pair travel the world in search of ever more repulsive items to put in their private collection. Their search takes them to a long abandoned graveyard in rural Holland, where they dig up a shunned grave and remove a jade amulet from the grinning skeleton within. The skeleton bears marks that suggest some kind of wild beast has torn at it. Upon looting the grave, the pair hear a horrific noise, which seems to be the baying of some gigantic hound.

The story is accompanied by creepy ambient music and sound effects that suggest, rather than outright evoke, what’s going on in the story. The weird “baying” is not the actual sound of a dog, but rather a creepy tone. The flapping of bat wings, the scratching of claws on wood, the moan of wind through the graveyard…these sound effects, along with minimal music, greatly enhance the reading.

Our narrator and his partner return to their lonely mansion with their prize. Before long, strange and uncanny events begin to plague them. They are being stalked by something unseen. But always around the edges of their sanity is the howling of a supernatural beast. As time passes, the stalking becomes less subtle until horror explodes upon the grave robbers. The final paragraphs, read with utter seriousness by Leman, are overflowing with complete and total doom. 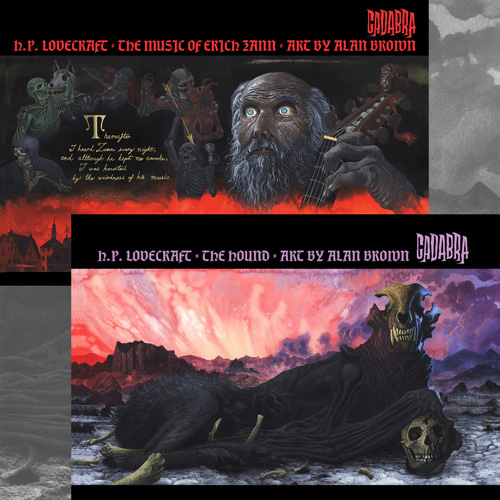 The Hound is a notable tale in the Lovecraft canon because it is the first actual mention of the famous grimoire of forbidden lore, the Necronomicon, as well as its ill-starred author, the Mad Arab Abdul al-Hazred. Both of those names have great significance for devotees of Lovecraft.

I found The Hound to be the more potent of the two stories, but The Music of Erich Zann is certainly not without its own uncanny appeal. This is one of Lovecraft’s most-reprinted stories and it creates a vision of a warped world that resembles our own but is terribly distorted. It also introduces a menace that is more fearful when it is heard rather than seen.

The nameless protagonist of The Music of Erich Zann is an impoverished student who finds himself lodging in a decrepit old building in a strange and ominous part of Paris. Unlike the main character of The Hound, this fellow is not well versed in the occult or the dangers of the unknown. The boarding house he lives in is in a rather twisted and run-down part of town that sounds like it could have been used as the setting for The Cabinet of Dr. Caligari. The hero has an entire floor virtually to himself…except for the strange, mute old man next door.

The old man is the Erich Zann of the story’s title. He is a wizened and desperately poor elder who has tremendous skill in playing the violin. But the music he plays is like nothing heard on Earth. On the soundtrack, the eerie music is again suggested by tones rather than an actual tune. This allows the listener to use imagination to fill in the gaps while still giving him something to grab onto.

An odd friendship develops between the protagonist and Erich Zann. At some points, the old mute is pleasant and approachable. But at other times he is sullen and fearful, as if something is pursuing him. And indeed, when his violin music is at its wildest, the man seems chased by demons. Perhaps because he is….

Zann’s crazed music is the only thing keeping him from the clutches from some cosmic horror of the void…an entity that cannot be seen but whose effects are terrible. The narrator becomes more and more wrapped up in this battle until one night…when Zann’s playing seems to fail him at last.

Andrew Leman again does an excellent job conjuring up the fear and confusion of a normal man caught in eldritch doom. I do think that The Music of Erich Zann is rather difficult to do as spoken word, because the sounds a reader can create in his own imagination are likely to be more terrible than the ambient sounds used here. But this story is by no means hurt by this and it’s a good verbal version of one of Lovecraft’s best-known tales.

I understand the vinyl version of this release will include liner notes from the ubiquitous Lovecraft scholar S.T. Joshi, who could probably tell you what H.P. had for breakfast the day he died. If there’s any aspect of Lovecraft’s life or work that he doesn’t know, I couldn’t imagine what it would be. I would also like to compliment Cadabra Records on the suitably grotesque cover art for The Hound & The Music of Erich Zann. If future volumes are as morbidly attractive, they will be a sight to see.

Cabadra will later be doing spoken versions of Lovecraft’s The Lurking Fear, Pickman’s Model and The Picture In the House. If they have the same quality as this effort, they’ll be great additions to the collection of every horror fan. I would like to see Cadabra dabble in spoken word releases for other horror authors like Clark Ashton Smith, Joseph Payne Brennan, and Richard Matheson.