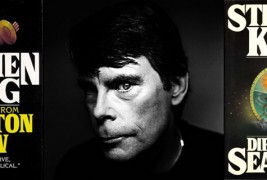 “Here’s some short stories, if you want them…” – Stephen King, Skeleton Crew

Synonymous with horror, Stephen King has carved quite a niche in the world of weird over the last thirty-nine years.  As a writer, his work is rivaled by few. Some of the best horror literature of the last century has come from the oft-shaggy haired fella who resides in Bangor, Maine. While just about anyone can rattle off the familiar titles such as It, Carrie, The Stand, Cujo and ‘Salem’s Lot, it’s the short work of Mr. King that truly display his prowess in the art of the macabre. King himself must fancy himself at least a halfway decent short story writer, considering he’s produced eight collections of original short stories.

Influenced by pioneers in the horror world such as H.P. Lovecraft, Shirley Jackson and Edgar Allan Poe, King saw his first short story published as an eighteen year old — I Was A Teenage Grave Robber was serialized in a fanzine called Comic’s Review back in 1965. Two years later, he sold his first professional short story, The Glass Floor, to Startling Mystery Stories.

In this writer’s opinion, there isn’t a better horror short story writer out there today than Stephen King.  It should come as no surprise that Stephen King’s work is some of the most borrowed material for television episodes, mini-series and such. He has a ferocious knack for bringing the hammer down with impeccable timing, in a short amount of time. He doesn’t drag on and on with descriptive paragraphs and he leaves enough to the imagination of the reader to keep those of us who love ambiguity satisfied.

So with my King love-fest in high gear and a hankering to re-read some of my favorite King shorties recently, I decided to put together my own collection — a collection of my favorite Stephen King short stories, in no particular order, spanning his entire writing career. What follows is a Top 13 (plus one) table of contents for a short story collection I’d like to call, simply, ‘All Hail the King’.

1. Jerusalem’s Lot — We first get a taste of the vampire rot to come in King’s world-wide bestseller ‘Salem’s Lot when we are introduced to a town that doesn’t quite seem all there. The story reads deliciously like a Lovecraft relic, with diary entries recounting the visit to the dilapidated town. People sleep all through the day and have indispensable amounts of energy once night falls. The story serves as a wonderful history lesson for the full length novel to come.

2. Graveyard Shift — Another selection from possibly my favorite King short story collection Night Shift, Graveyard Shift is one of the most freaky shorts I’ve ever read. Full of vivid imagery involving blind rats the size of calves, dog sized bats that tear off scalps, and a psychotic fella who leads a crew of co-workers into the darkest depths of a factory basement, this story is certainly not for those who get grossed out easily. A great read if you ask me.

3. Children of the Corn — The third and final selection from Night Shift, King saves the best for almost last in this collection, when he introduces us to the Children of the Corn on page 250. Like most horror purists, I wholeheartedly agree that the film was solid, but no CGI effect will ever be able to do He Who Walks Behind The Rows justice. The story is disturbing on several levels, as it breaks down common society boundaries as well as politics, but also instilled the fear of cornfields in everyone across the Midwest.

4. Rita Hayworth and the Shawshank Redemption — Different Seasons is probably King’s best collective work to date. This particular collection is relatively light in the pure horror department, but it’s a true psychological heavyweight worth anyone’s time. Shawshank shines brightest in this writer’s opinion. The tale of Andy Dufresne is an enveloping read, told from the point of view of fellow inmate Red, who is struggling with his own sense of mortality and life behind bars. This isn’t just one of his best short stories; it can be argued it’s one of his best works, period. A gripping read from start to finish, it’s only fitting that the film adaptation is one of the best to ever be made from a King story.

5. The Mist — 1985’s Skeleton Crew is as good as it gets when it comes to a collection of the macabre. The Mist is an action packed, claustrophobic tale of a small town suddenly in the grips of a military (?) operation gone horribly awry, with a suffocating mist bringing forth horrible beasts from other worldly dimensions. There’s little doubt this is another Lovecraft-inspired tale (many actually thought the film’s adaptation was a Cthulhu film when the trailers first started running back in 2006 and the film was released in 2007).

6. The Raft — If ever there was a cautionary tale for high school summer hijinks, this would be it. When a mysterious oil slick appears on a lake and begins eating through flesh and bone like acid, it quickly becomes clear that swimming out to The Raft may not have been the brightest idea. I also highly recommend the film, which was a part of Creepshow 2 and one of my earliest visual memories of horror. Don’t look into the psychedelic goo!

7. Here There Be Tygers — Skeleton Crew contributes three stories to this list, with this being the final one. This one is purely a guilty pleasure of mine, considering to this day I find my mind wandering whenever I’m in a big public washroom alone.  What if there was a monster in one of the stalls?  A boy with an overactive imagination has to use the school rest room, but knows what’s lurking within the stalls. He has his warning dismissed by both classmates and teacher, but he knows the truth: there be tygers in there.

8. Secret Window, Secret Garden — Talk about a mind fuck. You aren’t sure exactly what’s going on right away, but you know it ain’t right. If you thought the film left your jaw unhinged at the end, wait’ll you read the story. King masterfully weaves a tale of deception, self-denial and anger that leaves you as the reader wanting more, more, and more. As a writer, I found myself totally sympathizing with the poor schmuck Mort Rainey. You will too — until everything starts to crumble in a way only King can come up with.

9. Popsy — You know those mix tapes you used to make back in the day, probably filled with mostly popular tunes? Well, if this list were a mix tape, Popsy would be the “I don’t care, I just love this song” inclusion. It’s nothing special, a quick little vampire yarn that has you rooting for the razor toothed night flyers, when a small boy is abducted by a grimy thug. All the boy wanted was something to drink. A fun read that would have made a great Tales from the Crypt episode.

10. The Reaper’s Image — As an avid fan of all things spooky, it’s hard to imagine anything more frightening that seeing the Grim Reaper right behind you, just as he’s about to collect your soul. That’s exactly what you might experience if you look into one particular mirror, as is the case in The Reaper’s Image. The tale pulls at the strings of the fear of dying while also injecting a lethal dose of paranoia into the main character, an antique collector named Johnson Spangler, which in turn starts seeping through the reader’s conscience. Cool news has recently been announced regarding this short story — it is expected to be included in a new horror film anthology of King stories.

11. The Monkey — As a youngster, I remember seeing the cover to Skeleton Crew with the evil monkey gleaming on bookshelves and being utterly creeped out. Just the image of that little furry toy, all gleaming teeth and no soul, with his shiny cymbals, gave me the heebie-jeebies. When I finally got my hands on the book, The Monkey immediately became one of my favorites. Possessed by an evil spirit, the toy’s clanging chimes the death for a poor living thing nearby. It’s a good old fashioned, weird horror story and I look forward to its film adaptation next year.

12. A Very Tight Space — There are few things more wonderful in this world than a good old fashioned revenge tale. We all know a neighbor from one time or another who we’d just love to lay some swift justice on, whether they let their dog crap in your yard on a daily basis or they play their music too loud. Or maybe they rough you up and lock you in a port-a-potty during the sweltering summer, leaving you for the buzzards. Either way, when Curtis Johnson finally has the chance to make amends with his neighborhood goon, it’s a perfect cap off to a claustrophobic chiller.

13. 1922 — This one, from King’s latest short story collection Full Dark, No Stars, is the first in the four-story collection and by far my favorite. Good enough to make my list, as you can see. It’s got just about everything you’d want and come to expect from a King tale — rats, ghostly hallucinations, a rotting corpse and that overwhelming weight of impending psychosis that King is so skillfully able to lather over his main characters with seemingly little effort. We get to meet a family that puts the ‘psycho’ in dysfunctional and when a horrible act of violence is finally committed, father and son are left to deal with the aftermath.

14. Word Processor of the Gods — A fellow is living a nightmare of a life. He is married to a bitchy, mean-spirited woman. His teenage son is in need of a major attitude adjustment. Life, in general, sucks for a guy who just wants to write his stories on his beloved word processor. When he looks at his brother’s life, even with the recent passing of his young nephew, the main character can’t help but wish he could switch lives with his bum of a sibling. Thanks to a gift from his deceased nephew, he can. And does.  A fun romp through sci-fi with the King himself.

I’ll be the first to admit there are a ton of short stories that I love dearly that didn’t make this list. This isn’t a perfect list, nor was it meant to be. I simply decided to put together my own mix-tape of short stories that I find most enjoyable whenever and wherever I find myself wanting to crack open a paperback. Like those mix-tapes of yesteryear, not all of the selections are to everyone’s liking, but if you just sit down and take a few minutes to digest what’s in front of you, there’s a good chance you’ll have the selections stuck in your head for the rest of the day.

One thought on “All Hail the King: A Tribute to Stephen King’s Short Story Canon”