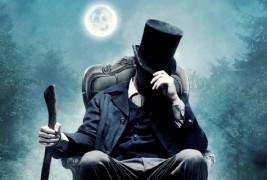 I’ll begin by stating that I have never read Abraham Lincoln: Vampire Hunter, nor do I ever intend on doing so. However, this is entirely irrelevant as this review is about the 2012 film adaptation of this epistolary novel. From what I can infer, a lot of the book has been excised save for the most basic elements of plot and action sequences, to no depreciation in the story’s overall flimsy narrative. Or, so it seems to me, anyways; what little I’ve read from it –mere pages, really — and the things I’ve read about it do not interest me in the least.

The film is directed by the Kazakh director Timur Bekmambetov, a man who has produced, written, and directed quite a few entertaining and visually striking films. I had earlier reviewed favorably the space horror movie Apollo 18, which he produced. He also wrote and directed both Night Watch and Day Watch, two very well made and fun films also about vampires, and directed or produced Wanted, 9, The Darkest Hour, and others. With these examples in mind, it becomes entirely apparent that Abraham Lincoln: Vampire Hunter will be a beautifully shot film full of exaggerated action sequences and lush, colorful sets. Add to this Tim Burton as producer, and the result is a dark, gothy chiaroscuro optical experience.

Abraham Lincoln: Vampire Hunter tells the story of the 16th president’s secret life as a hunter of the blood-sucking creatures. After losing his mother to a vampire (who actually died from the less glamorous malady of Milk Poisoning), the young Abraham begins a quest for revenge against the revenant responsible for his mother’s demise. While failing miserably in this endeavor, he is saved by a man named Henry Sturgess whom he’d earlier met in a tavern and by whom he’s trained to fight the undead. Lincoln is sent to Springfield to eliminate the town’s population of vampires under order from Henry. As he studies to become a lawyer, the lanky young man begins to create more and more connections in politics and starts on the path to a career in this field.

Soon, Lincoln comes to realize that slavery is being used by the vampires to provide a steady source of nutrition for their hordes. It will take more than his trusty silver-coated ax to truly vanquish the hemophile foe. He must battle Adam, the supreme vampire, to gain any sort of advantage in the battle against them. Lincoln becomes president and the civil war’s issue of slavery is a matter of survival for the vampires when their food supply is in danger of being cut off.

The film itself is visually exquisite. We are treated to a beautiful recreation of mid-19th century America and Benjamin Walker as Lincoln is very convincing, especially in Lincoln’s older years. The costuming is everything a goth-nerd could love. There are somber black suits, cravats, and top hats galore; it is everything you wish Hot Topic still sold instead of that scenester dayglo crap. Not since Bram Stoker’s Dracula has the nerdgasm of vampires and waistcoats and bodices and corsets in such stylish outfits come together so well. And don’t give me any of that Blade shit.

As fun as the style of the film are the fights, which are reminiscent of Bekmambetov’s Watch films and especially Wanted. Delightfully impossible ax fights and fabulous Gun Kata pulse through the film’s otherwise boring story. While I enjoy the fast-paced realism of Statham films and their sundry like, there is nothing quite like his slow motion sequences of grievous mutilations and fisticuffs and black powder pistol shooting. It’s like the antiquarian’s The Matrix.

Where this film fails is in the story’s plot and pacing. When there isn’t an awesome confrontation going on, I found myself utterly bored by the attempt to make interesting Lincoln’s romancing of Mary Todd and his internal struggles. As I’d said, nothing about the original story interested me, and it seems to have worked out even less well on the screen. When revisionist history is done by simply filling in the blanks with vampires, the result is bound to be dreadfully insipid. It becomes all the more vapid when it is compared with things like Alan Moore’s From Hell (the book, not the awful movie).

Furthermore, part of the attraction for me apropos vampires involves the myriad rules and prohibitions regarding their existence. Apart from the silver, very little else is taken into account to make their onslaught interesting. There is no mention of their inability to enter dwellings without permission, cross running water, or an aversion to daylight. A brief note is mentioned that they’ve adapted to exposure to the Sun’s rays. Nothing about knots in doorways or any of the other fun stuff the vampire must overcome to menace the living.

Watch the film if you enjoy a good-looking period piece with some semblance of a revenant threat and cool action sequences. If you seek a mixture of history and dark melodrama and you aren’t too picky, watch it. If you are looking for anything even a little mentally stimulating, perhaps it’d be better to just go read or watching something that’s actually good.