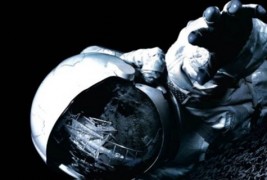 Although delayed about as many times as an actual space launch, Gonzalo López-Gallego’s Apollo 18 finally achieved lift off on September 2nd after six changes in its release date. A Wikileaks-style release of footage at lunartruth.com reveals the real fate of the last mission to Earth’s proverbial satellite. This found footage sci-fi movie purports to tell the story of the officially cancelled mission using this released footage. While the website itself seems to be a dud, the movie is not.

The minimalist cast is comprised of a trio of fated astronauts played by Warren Christie, Lloyd Owen, and Ryan Robbins along with Tommy, the technician on the other end of the radio at Houston mission control who provides the spacemen’s sole link to civilization, although he is only heard as a disembodied voice on the radio. An astronaut’s wife and child are also heard in a recording as well as an indispensable gruff armed forces man privy to the mission’s real goal and an ominous Soviet technician. Guided by the Spanish director known for several well-received films and produced by Timur Bekmambetov, the man behind Nightwatch, Daywatch, and Wanted, the cast excels in creating the eldritch atmosphere of terror and tension in that most foreign of settings: space.

Very little of the plot is extraordinarily original. At the height of the Cold War, NASA secretly reactivates an aborted mission to the Moon for the purpose of setting up a system of early detection monitors for ICBMs from the Soviet Union or its allies. Three astronauts are sent into space for this mission, with one astronaut staying on the shuttle while the other two descend onto the barren lunar landscape to install the system. When a set of strange tracks leads them to an abandoned Soviet lunar lander and to the desiccated corpse of a cosmonaut, things begin to turn ominous.

Effectively, Apollo 18 follows a ubiquitous storyline but presents it in an attractive package. It starts off slow, showing the minutiae of preparing for a 240,000 mile mission. Apollo 18 builds slowly towards excellent jump scares and a real sense of eeriness and unease. I could not help comparing the movie –in terms of the plot– to 2005’s anemic The Cave. In many of the reviews and commentaries regarding this movie I saw it being compared to John Carpenter’s superb 1982 film The Thing. This is a perfunctory analysis that omits several points that differentiate the movie in terms of ambiance, but, namely that the terror isn’t the pervasive doubt of identity but the steady, disquieting escalation in strange happenings in an environment that is equally strange and unknown. Also, this movie lacks Wilford Brimley.

The found footage genre has seen a meteoric rise in popularity since The Blair Witch Project came out back in 1999, seeing at least one example of the genre released every year with varying degrees of quality and originality. The notion that a fantastical occurrence is captured within a recordable medium has always fascinated people, from Elizabethan tales of travels to magical lands or Swift’s Gulliver’s Travels in the world of literature to the Cottingley Fairies and ghostly apparitions as well as other Fortean phenomena captured in photographs. Once radio came around, Orson Welles’ War of the Worlds fascinated the listening public with reports of an alien invasion, although it is an exaggerated myth that it created a nationwide panic that lead to suicides and violence. With the advent of film and the documentary, it was only a matter of time before the audiovisual medium was used to play with the public’s mind.

What started with Cannibal Holocaust in 1980, and was taken to a setting closer to home in 1990’s Man Bites Dog, spread like a fatal virus settling into the human population gradually from too much bushmeat, the found footage genre came fully to life in the 2000s. A scary movie wasn’t that scary anymore unless it was presented as an unmovie, a function of a meta-obsessed culture that needed the deconstruction of every layer in art, from comic books to movies to music. The venerable house of The Dead series that sprang from Romero’s classic 1968 Night of the Living Dead contributed Diary of the Dead in 2007, which turned out to be horrifying only in how bad it was. That same year, Spain’s [REC] debuted, easily one of my favorite horror movies of all time, followed in 2008 by its inferior American remake, Quarantine. It was also in 2008 that one of the most well known of the “real” footage horror movies came out: Cloverfield, a mediocre, vaguely Lovecraftian tale about a giant monster in New York told from the point of view of a bunch of obnoxious people. In 2009 and 2010, respectively, Paranormal Activity and Paranormal Activity 2 are released to well-deserved acclaim.

What makes Apollo 18 all the more terrifying in my mind are the many examples of real life unexplained situations that abound from which parallels could be drawn. The 1959 Dyatlov Pass incident has always fascinated me with its mystery of terror and death, along with the late 16th century disappearance of the Roanoke colony. Both of these incidents are representative of the inherent horror that pervades Apollo 18. A small group enters into a desolate, isolated terrain and encounter unknown forces that lead to their end.

I do recommend Apollo 18 as a worthwhile movie. As I’ve previously mentioned, the plot itself is not an amazing mindtrip, although it is not completely anathema to a fun horror movie, either. The technology and feel is very accurate and the cast convincingly play their roles with genuine fear and doubt. If this movie is slow, it is slow deliberately to enhance the celerity of the second half. Watch it and try not to jump or get creeped out. 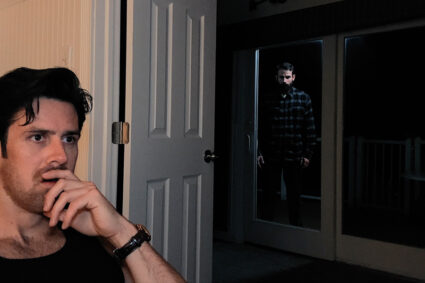