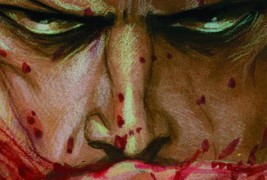 Almost a full year since publishing The Crow: Skinning the Wolves, author James O’Barr returns to the franchise with a new tale entitled Curare.  If you didn’t think it was possible to surpass the high standard set with Skinning the Wolves, you’ll be pleasantly surprised with his new tale of anguish and pain.

The narrative’s main character is Detective Joe Salk, a retired police detective who is haunted by the inability to solve the sexual assault and murder of a small child, Carrie.  This is a major shift in the series because even though Detective Salk is a true agent of vengeance and justice, he is still technically alive while being completely dead inside.  The ghost appears in the form of the murdered child, Carrie, whose non-corporeal spirit is guided by a crow.   This change in character development is a risky move for O’Barr as it’s quite different from previous Crow tales.  However, it’s very well executed and provides a fresh approach for the series.

The visuals of this book are eerie; the artwork by Antoine Dodé is surreal and instantly delivers the reader into the mind of the haunted Detective Salk.  The coloring is amazing and defies nearly every comic book trope.  One highlighted scene from the novel is during the portrayal of the initial kidnapping of Carrie from a playground.  In this scene, Dodé‘s art perfectly captures the haunting work of minimalism while vividly portraying the horror of the kidnapping.  A second highlight comes during the story’s climax, however I won’t spoil it here.  What I will say is that this scene contains some of the strongest and most horrific comic art I have ever seen.  These grisly images will be locked in my mind forever.   Antoine Dodé’s panels in this book deserve to be framed and hung on your wall.   For Dodé’s own perspective on his inspiration for the artwork be sure to check out Ravenous Monster’s interview with the illustrator.

Curare is brutal and jarring yet somehow not overly graphic.  O’Barr  and Dodé achieve this by providing illustrations that are not explicit in their portrayal of the harrowing violence yet still convey the extreme malice and violence the story encompasses.  As a result, this will be a hard book to stomach for most people and is by far one of the creepiest comics I have ever read.  James O’ Barr is brilliant in crafting this tale of the viciousness of a rape and murder of a child, without ever delving into exploitative territory.

The theme that runs throughout the story is the anguish that Salk feels from his inability to solve the case.  His grief is front and center, he is a man destroyed because he cares.  Unlike The Crow: Skinning the Wolves, Detective Salk exists as a fully realized character in that his own family is still alive.  The story has even more unsettling scenes during the difficult interactions between Salk and his wife and kids.  He is unable to function as a husband and father because the death of Carrie consumes his life.  Detective Salk’s internal struggle eventually costs him his family.

Fans of the original Crow series may be a bit puzzled at first by the turn O’Barr takes in Curare when he replaces the usual character responsible for taking out the bad guys, a physical spirit of vengeance, with the living character of Detective Salk.  Yet the tone and feel remains deeply entrenched in the original series. 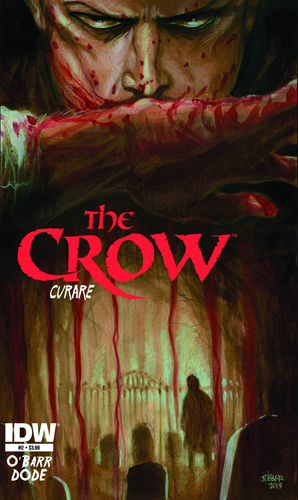