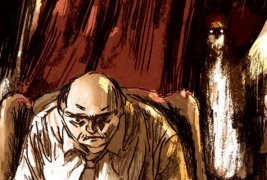 The Crow: Skinning the Wolves marked the end of James O’Barr’s long absence from the franchise he created and he’s back again with a new Crow tale entitled Curare.  The high standard he set with Skinning the Wolves is easily met in this new tale of anguish and pain.

The narrative is built around Detective Salk, a retired police detective whose inability to solve the sexual assault and murder of a small child haunts him, making him unable to live his life in anyway.  This book is just eerie; the artwork by Antoine Dodé is surreal, pulling the reader into the mind of a haunted man.  The coloring is amazing and it defies nearly every comic book trope.

The anguish that Salk feels is front and center, a man destroyed because he cares.  Fans of the original series will find much to like here, but should be forewarned: There is no physical spirit of vengeance taking out bad guys in this book.  Yet the tone and feel of the original is still deeply entrenched.

The Crow: Curare issues #1 and #2 currently available for sale.  I highly recommend them to fans of dark comics and would ask you to please welcome Antoine Dodé to Ravenous Monster….

RavMon: Were you a fan of The Crow franchise before your work on The Crow: Curare?  Which incarnation or elements strike you the most?

Antoine Dodé: I think I was 16 when I saw The Crow. I loved the Alex Proyas movie with Brandon Lee straight away. I went to see it twice at the theatre. The comic was released in France after the huge success of the film.

Working as an artist on a Crow story written by James O’Barr is a dream come true. Actually, the first comic I did, Armelle et l’Oiseau (Armelle and the Bird), was inspired a lot by The Crow. That’s not the same kind of story. It’s more like a kind of fairy tale; it’s about a little girl who loses her mom, and ends up befriending a strange bird.

RavMon: How did you come to work on The Crow: Curare?

AD: What happened is I met the artist Miran Kim in Angouleme a few years ago during the biggest comic convention in France. She used to do some Crow covers in the late ‘90s—she also painted that amazing variant cover for the first issue of Curare. I told her I was planning to do some Crow fan art, and she suggested that I send some to James O’Barr. I was crazy lucky because James was looking for an artist for Curare at the time, and he thought my art would fit perfectly. That was amazing.

The funny thing is, James didn’t know my first book, Armelle and the Bird, at that time, and both stories feature a little girl with a big black bird.

RavMon: How closely did you work with James O’Barr when illustrating this series?

AD: We worked over the internet. James sends me a full script, then I do the breakdown, send that back to him, and he tells me what to change or not. Then I do the art. As you know, Mr O’Barr is a great artist and he gives me gives me great advice and leads all the time. At first, he was giving more direction, until he came to trust me with the work and gave more me more space.  Well, I have that feeling at least. It’s a real pleasure to work with him. I love the mood of the story, and that he really gets my work. We’ve never met in person but he is a really nice person to hang out with on the internet!

RavMon: The Crow: Curare delves away from some of the familiar tropes of The Crow series.  Was there any concern with alienating any of the older fans with this project?

AD: That’s more a question you should ask James O’Barr, I guess. I thought I would have to draw a more typical crow character like my original fan art submission. I was really surprised by the story. It was really different from anything I knew about The Crow. The cop, Joe Salk is not glamorous, like other Crow characters, but ultimately all the familiar romantic and violent elements are there.

RavMon: When crafting the images for O’Barr’s scripts are there specific elements you pay extra close attention to? Do you lean on any specific artistic influences for this work more than others?

AD: My main focus is going to the storytelling, the breakdowns, and how the characters act. I always have a Richard Corben comic book close from me. I love his storytelling and the composition of the pages. It’s really helpful when I’m working on one of the Crow pages to keep a handle on the specific format of US comics. It’s slightly different from a French comic book.

Also, James gives me a lot visual ideas about the places, the cars, the time period, and the character design.

RavMon: Do you have anything new coming down the pipeline you would like to share with us?

AD: I’m working on a 340-page graphic novel, Pierrot Lunaire, for the French publisher Ankama. It will be released next year. The story is a mix between Dead Poets Society and Night of the Living Dead, with some more fantastical elements. 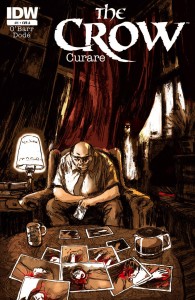