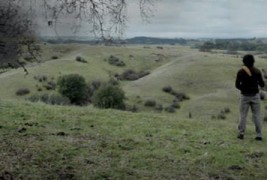 Director Jeremy Berg’s psychological horror-thriller Sader Ridge (The October People) is a refreshingly creepy film.  Where other movies might go for cheap scares and body horror, Sader Ridge is a quieter movie that relies on the strength of its performances and the implications of the unspoken to deliver a more thought-provoking fear.

The film is about Sam (Trin Miller), a college student who knows nothing of her biological family or the circumstances that led to her adoption.  When she inherits a house from an estranged aunt, she takes three friends with her on a road trip to inspect the property.  Once there, they’re joined by the home’s creepy young caretaker, ex-military Eric (D’Angelo Midili).  As they explore the house and surrounding land, Sam begins to remember troubling things about her past, and the lines between memories and reality begin to blur.  As the mystery unfolds, we discover that Eric knows more than he’s been letting on, and nothing about the situation is entirely what it seems.

Although the story of college students on a road trip is well-worn horror movie territory, Sader Ridge manages to avoid falling in most of these clichés.  The greatest strength of the film isn’t even the primary plotline about Sam’s family, but rather the twisted side stories that play out between the characters.  These kids are all complete characters, with fully-fleshed backstories that bleed into the tale without eclipsing it.  Their interaction is riveting on its own, and the chemistry between the actors helps to suspend all disbelief about their friendship.

Of particular note is Midili, who owns the role of Eric and is genuinely compelling.  His is a difficult, nuanced role – he is in turns creepy and endearing, awkward yet sympathetic, and his performance carries much of the weight of the film.  Brandon Anthony, too, deserves props for playing dual roles: The first as Sam’s conflicted ex, and the second as the embodiment of her abusive father’s memory.  He does well in both, though he could stand to be more intimidating in the second form; his performance is perhaps too strained to really communicate the horror of Sam’s descent into madness.

That Sader Ridge is such a character-driven film helps to distract from its occasionally problematic script.  The story leaves many loose threads, and while some parts of the indeterminate ending are endearing, other parts seem simply unfinished and obfuscated.  While we get enough hints to piece together most of the relevance of what we see on screen, the majority of the action culminates in the final 20 minutes; if that section of the film had been longer, we may have had more time to fully appreciate the horror before it reaches a crescendo.

But ultimately, Sader Ridge is the kind of film whose horror lives not on the screen but in the shadows surrounding it.  It’s the type of story that begs to be thought about, and its implications become all the more disturbing when they occur to you hours or days later.  With its compelling characters and intriguing premise, this is a psychological horror well worth watching if you don’t mind – or even embrace – having to fill in a few details for yourself.