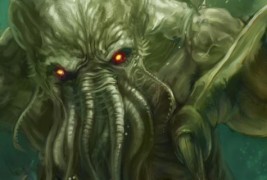 From kindergarten on, my academic career has been a long, proud series of off-topic outbursts on everything from Persian demonology to sharks.  I’m so good at changing the topic (or at least getting everybody’s attention while trying to do so), I probably should have become a political pundit rather than a dark fantasy writer.  Given the right instructor, I could effortlessly deflect a potentially boring discussion about South American weather patterns into a potentially awesome discussion about traditional headhunting among the Shuar people of Ecuador.  But the day I introduced H.P. Lovecraft into my tenth grade English class was no off-topic caprice of personal boredom.

My poor English teacher[1] was lecturing us on early to mid-twentieth century literature, and she said, “Jean-Paul Sartre was one of the fathers of existentialism, a literary movement that stressed the concept of man’s aloneness in a godless universe—”

“Just like H.P. Lovecraft!” I shouted.  I failed to change the topic, but I never quite looked at all those eldritch horrors the same way again.

I said the “e” word.  If you’re a horror buff, anything preceded by the word “eldritch” calls up an immediate association with Lovecraft and his monsters.  Dictionary.com defines it simply as, “Eerie; weird; spooky.”  It’s not even a word Lovecraft invented himself.  The first recorded usage occurred in the early 1500s, and it was preceded by elrich, an Old English word signifying something from a strange and distant land.  We can take Lovecraft to task for the outlandish number of multi-syllabic adjectives in his story, but it’s hard not see a bit of unconscious branding going on here.  In a boing boing article,[2] Cthulhu Chick counted twenty-three usages of the term in Lovecraft’s body of work.[3]  It worked.  We hear “eldritch” and we think of alien gods whose scope, power, and age dwarf us.

Lovecraft didn’t invent the usage of monsters as symbols for primal chaos or mankind’s smallness, as any survey of world mythology will show.  But by wedding his monsters to the concept of infinity, Lovecraft produced some of the few non-human fictional creatures that still have the power to frighten us.  Put differently, zombies may eat you, werewolves may maul you, vampires may suck your blood, but none of these things threaten our position at the center of God’s universe.  Eldritch horrors like the kind imagined first by Lovecraft and his circle render you and me and any conception we have of God beyond trivial.  The fear they engender isn’t based on what they do to us physically or mentally, but what they do to us existentially.  A lot of people—even some sincere Lovecraft fans—don’t really get this.

Somewhere out there in Internet-Land, I stumbled across a website run by a guy who considered himself a Satanist Cthulhu worshipper.  Like most latter-day Satanists, his take on the Prince of Darkness centered on devil-worship as exaltation of the individual; think Nietzsche by way of Ozzy Osborne.  Cthulhu got awkwardly bundled into all this, mostly through lots of references to tentacles.  I have no doubt that I could sit down with the gentleman who created the website and have a long, nerdy discussion about Lovecraft.  But he averted his eyes and spared himself the real the horror.

Shortly after publishing “The Call of Cthulhu,” Lovecraft told an editor, “Now all my tales are based on the fundamental premise that common human laws and interests and emotions have no validity or significance in the vast cosmos-at-large.”  Individuality, personal achievement, temporal power—these things are totally inconsequential in Lovecraft’s world.  Rats scare me.  Deep water scares me.  The idea that I will pass from this world and leave nothing of any consequence terrifies me.  Lovecraft reaffirmed that fear in everything he wrote.  He may have called it Azathoth or Nyarlathotep, but the conceptual brilliance—and terror—of eldritch horrors rests as much on what they represent as on their squamous hides and misplaced pseudopods.

Jean-Paul Sartre, Franz Kafka, and H.P. Lovecraft all tapped into a growing idea that the universe had no real order, that the sameness of our day-to-day lives is a façade.  You’ll read Kafka[4] and Sartre in a college lit course.  Odds are slim that you’ll read Lovecraft.  Why?  It’s true that Lovecraft is the least effective stylist of the three.  It’s also true that Lovecraft’s personal views on race are difficult to stomach.  But I think it goes back to the monsters.  Should we feel guilty for enjoying them?

It’s hard not to—especially in Lovecraft’s later stories, where he got better at creating them.  I love Cthulhu, but let’s face it—it’s kind of doubtful that alien evolution would create something as concrete and understandable as an octopus-headed man with bat wings.  When we get into the really strange stuff—the barrel-shaped radiates from At the Mountains of Madness, the cone-like Great Race of Yith from “The Shadow Out of Time,” the terrifying “Colour Out of Space”—we’re dealing with the sublimely weird.  The fish-men from “The Shadow Over Innsmouth” are a little more conventional, but the corrosion and decay they bring down on a tiny Massachusetts fishing village are powerfully vivid.  This is why I fell in love with horror to begin with.

But it’s also why Lovecraft, more than almost any other author I can name, changed the way I view the world.  Encoded in his eldritch horrors, nefandous abysms and cyclopaean terrors (take your pick) was an idea I remembered vividly enough to shout at my English teacher.  I was excited—I understood what she meant.  All thanks to the monsters.

[1] I’ve since married an English teacher and seen the toll that repeated off-topic outbursts take on their sanity.

[3] Whose website (including crocheted Cthulhu dolls!) can and should be visited at http://cthulhuchick.com/.

[4] If you haven’t read Kafka, you should. I don’t say this to be an overbearing English nerd of the “Put that comic down and read something that will improve you!” sort, but because Kafka wrote some wonderfully horrific (and often weirdly funny) stories.  “The Metamorphosis” has a traveling salesman turn into giant insect.  “In the Penal Colony” features a prisoner condemned to death by an apparatus that will carve the details of his (trivial) crime into his flesh.  How can you not go for shit like that?