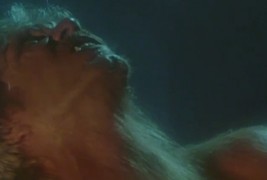 I always loved werewolves.  Hell, I was one.  I know how they think.  I know what it’s like when the change hits, that crawling moment when man becomes beast and that dreaming one when beast becomes man again.  I know that.  I’ve been there.

Years after I stopped being a werewolf, I became a naive and idealistic college freshman. One day, I made the mistake of telling a fellow student that I was writing a novel about a werejaguar.  I had never been a werejaguar, but fiction is, after all, half experience and half speculation.  Andrew straightened his glasses, gave his most academic sneer, and said, “You know about the symbolism of werewolves, don’t you?”

“Well, there was an association between jaguars and rain in ancient Mexico, so my main character changes into a jaguar every time it storms.”

“No,” he said. “Think about it–werewolves are human, and then once a month, when the lunar cycle is at its crescendo, they become monsters. Werewolves symbolize women and the menstrual cycle.”

“No,” I said. “That full moon thing only goes back to the 1920’s–it was a Hollywood invention. Originally, werewolves changed whenever they put on a wolfskin they got from the Devil–it was a Christian reinterpretation of the shamanic idea of animal-human transformation.”

That was a good textbook answer, but not entirely there.  Not in my experience, at least.

“Are you impugning my knowledge?” asked Andrew.  He said it with the disgust and shock you or I might reserve for questions like “Why is this chair sticky?” or “You never took penicillin for that?”

The point here isn’t that Andrew sounded like a pompous douchebag (though he did).  Nor is it that I should have told him I was impugning his knowledge, then dug back into the traces of lycanthropy that still fringed my soul and torn his throat out rather than politely backpedaling in the interest of personal courtesy, thereby developing a complex about being a beta male (though I should have).  The point is that in a genre where vampires constantly represent forbidden erotic fulfillment, golems and Frankensteins and robots consistently warn us not to play God, and zombies always seem to be a wry postmodern comment on mindless consumerism, werewolves remain a symbolically open beast.

In his essay, “Darkness Absolute: The Standards of Excellence in Horror Fiction,” writer Douglas E. Winter dismisses werewolves as outdated–an emblem of the savage, class-based degradation of the civilized man for priggish Victorians to faint over.[1]  But werewolves never underwent the sort of rebirth vampires did starting with Dracula[2], and they remain our oldest and most universal monster.  A cave near Trois-Freres in France boasts a fifteen thousand year-old painting depicting the transformation of a man into a stag, but the belief is certainly older.  Tamomo No Mae was a legendary Japanese empress who was secretly a malevolent, nine-tailed fox.  Haitian slaves mixed African notions of totemic societies with French beliefs in loup-garoux to create an almost Linnaean catalog of werepythons, werecrocodiles, were-elephants and werelions.[3]

One night, a Somali friend of mine told me that in his native village lived a family of sorcerers.  At dusk, once, he had seen one of them sitting by a fire on a hyena-skin rug.  “The skin began to crawl over him, joining with his body, and he became a hyena and ran off,” said Hassan.  Do you believe it?  More to the point, what does it matter if you do?  There are a lot of people for whom werebeasts are as real as they were for the artist in prehistoric Trois-Freres–and I don’t even mean the Team Jacob fangirls.

But if every other iconic monster in horror has fossilized into a dull archetype, what do werewolves mean for us?  True to their metamorphic nature, anything we want.  There are still plenty of full moon curses and Lon Chaney-esque monsters, but we just as often see werewolves as superheroes (Wolfsbane of the X-Men), as symbols of masculinity (why were all the werewolves in Underworld guys–and why did they have so much fun naked wolf-wrestling?), femininity (Ginger Snaps), environmental conservation (the old Werewolf: The Apocalypse roleplaying game by White Wolf), sexuality (The Howling), and ethnic identity (the nice Jewish ze’ev-mensch in An American Werewolf in London).  Not all of these approaches are to my taste (I always found the werewolf-as-Captain-Planet approach taken by Werewolf: The Apocalypse woefully stupid), but it’s interesting that after hundreds of thousands of years of werewolf stories, they still mean so many different things to us.

I know I loved werewolves long before I considered myself a horror fan.  But then, I was one.

One night in third grade, I awoke to the change.  It started as a feeling of prickling heat radiating through me, followed by a snarling and gurgling that came from my mouth, but which I never intended to give voice to.  At once, all control of my body left me.  I somersaulted and spasmed over my bed, my lips twitching and my tongue worming over my gums.  I have a vague memory of my father rushing into the room, thinking I was choking and trying to put his hands in my mouth to remove my retainer.  I bit down until I drew blood.  I wanted to apologize, but I couldn’t speak and hoped he understood that this was never a change I had wished for.  The whole transformation ended at last in a deep and restful darkness, disturbed only by distant weeping.  The weeping, I thought, must have been my mother.  I wanted to sleep, but I felt guilty about leaving her to cry.

I opened my eyes to see my parents standing over me.

“Sweetie,” said my Mom, obviously relieved. “It’s okay. But I wasn’t crying—that was you.”

I missed school.  The doctors at the hospital said I had suffered a night terror.  My Mom, who got her Ph.D. in the history of science and had been reading a lot about seizures at the time, wasn’t convinced, so we went to a neurologist.  An EEG said it was a mild form of grande mal epilepsy[4] caused by a spike in my brainwaves.  I could expect to grow out of it in my teens.  A few more years of reading, playing Dungeons & Dragons, and watching old horror movies allowed me to put together what the neurologist had, no doubt with the best intentions, hidden from my parents.  Brain scans and Tegratol prescriptions would never control what only silver and wolfsbane could cure.  Through ancestry or hex or some unremembered animal bite, the curse had found me.

I had a few more attacks before I turned thirteen and the neurologists said the spike had left my brain.  My parents would hold me on my side like a dog getting a shot until they subsided, and then I would howl in that soothing darkness and go to sleep.  I grew older and fell in love with horror.  I went through a vampire phase and a zombie phase, an alien phase and a phase where I was fascinated by mad scientists and necromancers.  Only werewolves lasted.

I just couldn’t identify with the others.

[1] If you ever foresee yourself writing horror, by the way, “Darkness Absolute” needs to be shifted somewhere towards the top of your reading list.  Winter makes a number of incredibly insightful, cogent and timely points.  But personal experience dictates that I can’t entirely agree with him on werewolves.

[2] I know Stoker wasn’t the first to write about sexy vampires (that honor goes to Sir John Polidori and his Lord Ruthven).  Frankly, it always struck me that you’d have to have a pretty warped view of human relations (like, say, a Victorian) to see Dracula as sexy anyway; Stoker’s vampire strikes me as more commanding and coldly majestic.  Point is, werewolves never got redefined like vampires did.

[3] Werehippos were missing, at least as far as I know.  That’s a shame, because hippos are one of nature’s most terrifying animals.  Think I’m full of shit?  Look up “Hippo Skull” on Google Images and then picture what you see encased in over a ton of muscle and burning with a rage that might charitably be described as “Old Testament.”