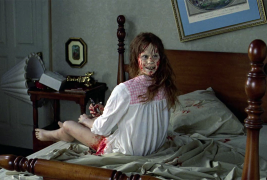 Robert Bloch agreed with me, and if he’s on my side I don’t care what the rest of y’all motherfuckers think.  Okay, that’s not entirely true, but I still have to say: I don’t think The Exorcist is that scary.  Likewise Rosemary’s Baby.  Likewise The Exorcism of Emily Rose. Likewise The Reaping.  Or, as the inestimable Mr. Bloch put it:

“Viewed in retrospect, The Exorcist was scarcely a literary landmark, and the film that followed was illogical and prolix. Few members of the audience could clearly explain the origin of the demon, why this entity took possession of a child, or exactly how it met its final fate. Nor was their interest a religious one. The spectacle of a little girl whose face was transformed by makeup into an unreasonable facsimile of Harpo Marx’s ‘gookie’ grimace, spewing obscenities and green pea soup or rotating her head a full 360°, seemed the chief attraction.

Nevertheless, it was clearly stated that the Devil made her do it.”[1]

As the son of a Lutheran-raised mother going Buddhist in middle age and a Jewish father lapsed into something like agnosticism, being a heretic runs in my blood.  Stir in a childhood in “bless your hellbound heart” Baptist Georgia,[2] a Hasidic cousin who has taken it on herself to repopulate the Jewish people,[3] a front-row seat for the rise of the Muslim Brotherhood’s incompetent but zealous government in Egypt,[4] and a triumphant return to a First World country with unprecedented access to education where nearly half the population nonetheless believe that a tawny-haired bro waved his hands and made all life on earth pop into being,[5] and you’ve done all you need to create a first-class infidel.[6]

The reality is that I’m not a savagely Dawkensian heresiarch,[7] but just another touchy-feely, I-respect-your-deeply-held-personal-beliefs-if-you-respect-mine, agnostic pussy.  But I still think The Exorcist gets a lot less scary once the blasphemy and pea soup start.  I just don’t believe in the Devil, and if I can’t suspend disbelief, I can’t get scared.

Before I got into horror, I liked stories about dragons, but only certain stories about dragons.  The ones I liked could be roughly categorized as “stories where the hero’s ass is on the line.”  George may have been a Saint, but his ass was on the line.  In the version I liked best, he fights the dragon for three days, and by the end of each one, he almost dies but for a last-minute miracle.  I suspect if George hadn’t solved things on Day 4, God would have said “Fuck it” and found England another patron saint who could get things done in a reasonable time-frame.

Contrast that with the story of St. Martha and the Tarasque.  The Tarasque lives in a river somewhere in France, and the local king can’t kill it because it’s too fierce for all his soldiers.  Along comes St. Martha, and we figure she’s about to go Joan of Arc on the amphibious motherfucker.  Instead, she says a prayer, shows it a cross, and it becomes her tame conversion-mobile, ferrying her about the Gallic countryside to win souls for Christ in what is probably the least exciting denouement to any story about a dragon from any culture ever.

Saint Martha’s ass is never on the line. 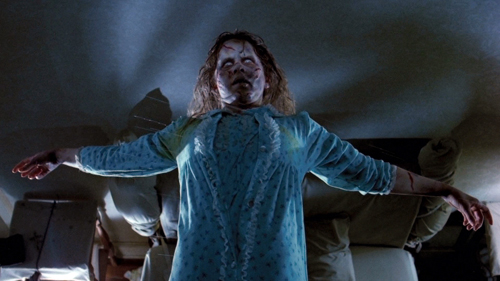 Horror thrives on the idea of an unfriendly universe.  Whether Gothically malevolent or cruelly uncaring in its Lovecraftian indifference, horror works best when you have isolated protagonists forced to rely only on their own resourcefulness to combat the forces of darkness.  If they ultimately fail, it makes things that much scarier.  This is why I’m onboard with The Exorcist until the exorcism actually starts.  The surreal opening in Iraq,[9] the unexplained seizures that grip Regan, the moving furniture. . .it’s all good, creepy stuff until the holy water starts flying.  It doesn’t matter that Father Karras dies in the end—he’s still got God on his side, and therein lies the rub.  Because we’re in an explicitly Christian world, we know the demons don’t have (ahem) a snowball’s chance in hell of winning.  It’s written in Revelation—there’ll be losses, but God is victorious and he takes the faithful with him.  One could even see the presence of spirits like Pazuzu as a sign of hope: all that faith isn’t in vain—your soul will get rock-a-‘ed in the bosom of Abraham even if you get there by way of Satanic defenestration.

Dante Alighieri’s Inferno is not only an incredible work of dark fantasy, but one of the scariest books I’ve ever read.  The nightmarish tortures inflicted in Dante’s Hell are haunting in their explicitness: suicides transformed into bleeding trees, thieves metamorphosed into body-swapping serpents, traitors frozen into ice, conscious for eternity…each testifies to the nightmarish cruelty of the Inferno’s tyrannical overlord.  Oh, I’m not talking about Satan—he’s frozen below the waist, as much a prisoner as the tormented souls around him.  I’m talking about God.

And Dante’s God lets us off pretty easily.  Noble unbelievers, from Greek philosophers to virtuous Muslim generals, get a nice garden to wander around in for the rest of time.  Sure, it’s a runner-up Heaven, but it’s not bad as consolation prizes go.

The first time I heard an American pastor say that salvation occurs through faith alone, I didn’t really understand what he meant.  Being good means nothing?  Jeffrey Dahmer’s conversion to Christianity means he goes to Heaven while Gandhi burns in Hell?  There are a profound number of people in this world who believe exactly that: eternal fire for those who disagree.  Next time you burn your finger on a hot plate, think about feeling that hot, sharp, immediate pain all over your body for a day.  Then think about a being who would subject innocent people—even good people—to that feeling for all eternity, simply for not bowing to him.

Makes a case of head-rotating pottymouth seem pretty harmless in perspective, doesn’t it?

[1] From Bloch’s essay, “Heritage of Horror,” featured as an introduction to The Best of H.P. Lovecraft: Bloodcurdling Tales of Horror & the Macabre.

[2] Not that they’d get the reference.

[3] She’s cranked out nine kids in as many years. This process will likely continue until either Moses himself comes down and tells her to cut that shit out, or she suffers a spectacular uterine meltdown that levels much of Brooklyn in a wave of dybbuk fetuses, requiring a crack team of super-Jews from across time-space to clean up the squirming mess. In the interest of disclosure, Savage Readers, my irreverent dismissal of my cousin’s religio-genital mission likely has something to do with an indelicate comment she made to my dad a few years back about the “blight of interfaith marriage,” which produces impure Jews like my mongrel self. Why does that line of reasoning sound so familiar?

[4] Next time some whack-off is shitting their pants in your presence about the imminent danger of hardcore Sharia Law coming to America, kindly remind them that the Brotherhood wasn’t even competent enough to impose it in Egypt, which is 90% Sunni Muslim.  By the time I left, nobody in Cairo liked the MB.

[5] Don’t believe me? Maybe my friend Mr. Gallup will convince you. . .< http://www.gallup.com/poll/21814/evolution-creationism-intelligent-design.aspx>

[8] A (mercifully ex-) girlfriend’s father once referred to me as, “anti-family, anti-church, and anti-God.”  This was a bit disappointing to me. I always hoped to be condemned in terms like that for something I wrote, not because I didn’t want to go to a Methodist prayer luncheon. I felt like I hadn’t really earned what he was saying.

[9] I’m not sure where the best place to say this is, so I’ll say it here: I know the demon depicted in The Exorcist isn’t Lucifer, but Pazuzu, a Babylonian demon who, though malign, was still invoked by pregnant women to protect their babies (this is why Father Merrin, examining an image of him in the beginning of the film, says, “Evil to combat evil”).  Given that, as I can recall, he’s not referenced by name and acts much more like a Christian demon than an ancient Babylonian one (a protector of children from the predatory demoness Lamashtu, at that), I feel comfortable just calling him the Devil.