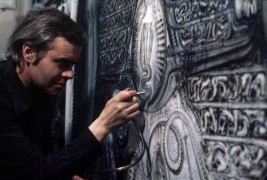 All our legends die.  One day, Savage Readers, we’ll sign on to Facebook and find out that Stephen King, Clive Barker, Anne Rice, and John Carpenter are crafted of the same mortal maggot-meat we all are.  On May 12th, Swiss artist Hans Rudolf Giger died after suffering a fall.  For an artist who so brilliantly portrayed the plasticity of the flesh, it seems a poignantly human way to pass on.

Like many, I first encountered H.R. Giger’s name through the Alien movies.  Horror films tend to skimp on monsters nowadays.  Whether this is due to budget or laziness, I’m not sure, but outside of a talent like Guillermo Del Toro, you just don’t see creatures crafted with the same loving detail and originality of Giger’s Xenomorphs.  Between the working-class feel of the film and the incredible design of the monsters, Alien still feels like a more real vision of the future than anything released since, with the exception of Blade Runner.[1]  I doubt it would even be greenlighted today.  But as inextricably linked as Giger’s name is to the Alien franchise, it’s reductive to think of his art only in terms of the film. 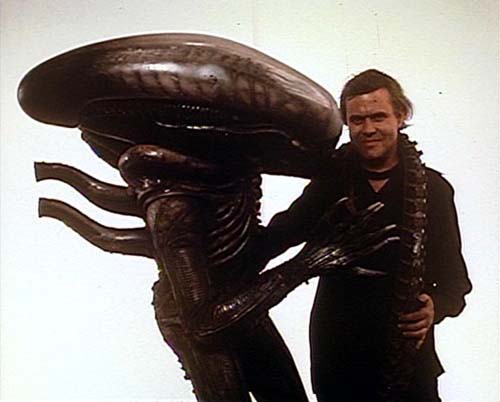 If you’ll permit me a brief digression, I know our current cinematic woes are at least partially due to the economy, because in a better economy, my friend Jay Webster would have gone to Hollywood to be a producer.  Jay knows movies better than most film students—his attention to detail is suitably Gigeresque, which is why it’s richly appropriate that Jay was the first to really introduce me to H.R. Giger’s art by way of a book entitled Necronomicon.

Sandy Peterson, creator of the Call of Cthulhu roleplaying game, describes Giger’s Necronomicon as “infused with the spirit of the original.”  This is putting it mildly.  If ever a book existed that could drive sensitive readers to nightmares, that could really and truly be called “blasphemous,” it’s the one Jay showed us that night in the dorms.  You don’t enjoy Giger’s art—it transports you to a realm of grotesque beauty and loathsome sexuality where the artist’s imagination glows like an ember out of every brushstroke.  In “Pickman’s Model,” the narrator sums up the horror of the titular painter’s work by saying, simply, “It was the technique!”  Giger was a noted fan of Lovecraft.  In a Moebius I think both would have appreciated, Lovecraft predicted Giger.

Giger was our Pickman.  He was one of those rare, incredible artists, like Bosch or Beksinski or Arcimboldo or Dali, who doesn’t merely depict the fantastic, but changes how the rest of us see it.  To view his art is a perversely religious experience; if Leonardo Da Vinci drew Black Masses instead of Last Suppers, he would have been H.R. Giger.  I’m probably not very qualified to eulogize him.  I’m not an art critic or an aesthetician.  I don’t know much about his life or his artistic philosophy.  I know him the way a sooty pilgrim knows the ceiling of the Sistine Chapel.  Distant, mysterious, dominating, and ethereal in its beauty.

To his family and friends, we at Ravenous Monster send our sincerest condolences.

[1] And Dark City, the lovechild of the two.