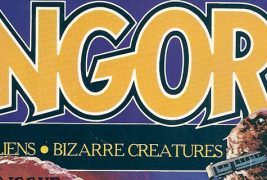 When FANGORIA first hit the newsstands in 1979, the world, both the real one and the horror-centric one that so many of us choose to indulge ourselves in whenever possible, was a much different place.  Trailer leaks, Comic Cons, digital publishing and, frankly, competition simply weren’t issues for FANGO upon its debut.  The magazine that raised an entire generation on gore and Hollywood fright became the leading authority in the genre rather quickly and for the next thirty-plus years it would be synonymous with horror entertainment.

These days, the digital age is seemingly consuming every artistic entity known to mankind, with books, comics, television, films and – yep – magazines all being affected by the fact that digital releases and copies usually reach a broader audience than their physical counterparts do.  Of course the elephant in the room regarding this fact is that money plays a huge role in entertainment, of course.  Digital releases and subscriptions are far less expensive to release to the masses than are snail-mail subscriptions, so it should come as no surprise that the horror magazine rack is thinning out these days.  This is heartbreaking for me, because there is nothing better than picking up a few new rags and flipping through those glossy, vibrant pages that take me right back to my childhood.

Over the past several months, FANGORIA has gone through quite a transformation, both regarding their publishing direction as well as the brains behind the magazine.  Such sudden upheavals tend to make heads spin, but rest assured, it seems FANGO has the right man for the job in place.

Recently, I had the chance to speak with new FANGORIA Editor-in-Chief Ken Hanley about the future of the magazine as well as what makes him tick as a horror fan.

KEN HANLEY: I’ve been active as a writer as long as I can remember.  I wrote my first feature-length script at 11, and have always loved writing as a way to work with my creativity and overactive imagination.  But in terms of the horror or entertainment journalism field, I’d only done some amateur blogging before becoming an intern for FANGORIA almost four years ago. 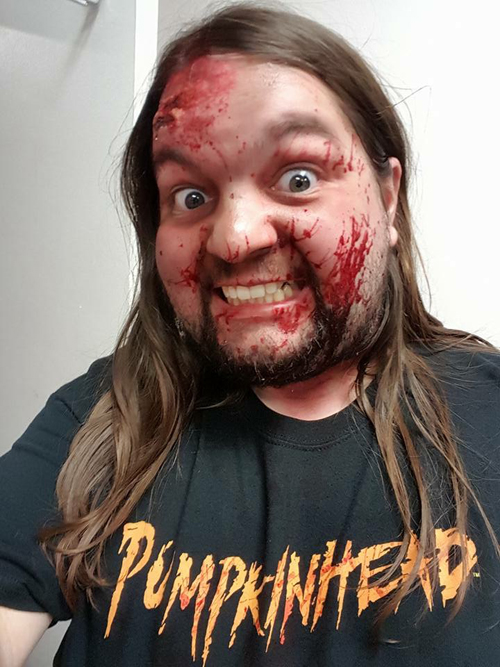 RAVMON: Congratulations on the new title with FANGORIA.  How long did it take for it to sink in that you are the new captain of arguably the biggest horror vehicle out there?

KH: Well, considering the circumstances of the inheritance, it was all a bit surreal and strange for a while.  In fact, there were a few days of real uncertainty where I didn’t know exactly what was going on with the company in light of Mike Gingold and Bill Mohalley’s exit.  When I got the offer, I took it without pause, but at the same time, there was a bittersweet aura over everything and a lot of anti-FANGORIA sentiment was out there on social media.  It really didn’t hit me until weeks afterwards, when I put together a pagination and there was a reality to Issue #347.  When I saw that I was doing something tangible, the excitement hit me, and rightfully so since I’m very proud of that issue.

RAVMON: How did you get the news that you were the new Editor-in-Chief?

KH: A few days after I heard Mike and Bill were no longer with the company, I got the call.

RAVMON: 2016 began much the same way 2015 ended with the magazine: a lot of uncertainty and scrutiny, especially though social media.  Now FANGO is coming out the other side with some fantastic upcoming issues and surprises.  What have you taken from what can only be described as a difficult transition period?

KH: Well, the problem is that there’s a bigger picture to everything, but it’s incredibly difficult to talk about with complete transparency.  One thing I can say was that there was a separation of responsibilities that hindered communication between the staff, and in that regard, there were certain aspects about the company that unnecessarily languished because it wasn’t being addressed properly.  Add in the difficult state of print media – specifically, the closing of distributors, fulfillment centers and advertising budgets – and things were quite disastrous for a while.

But what’s important to know was that it wasn’t like we printed a ton of issues and just weren’t sending them out; unbeknownst to me, issues #345 – 347 all did not hit the minimum advertising mark needed to pay for printing and freelance writers.  So what we’re trying now is changing up our approach to advertising so that we can make enough money up front to print these issues simultaneously, or at the very least, get back on our feet.  Basically, what I’ve taken from this transitional period is the necessity to be hands-on beyond the print magazine, and personally addressing issues such as advertising woes, staff communication and customer service issues. 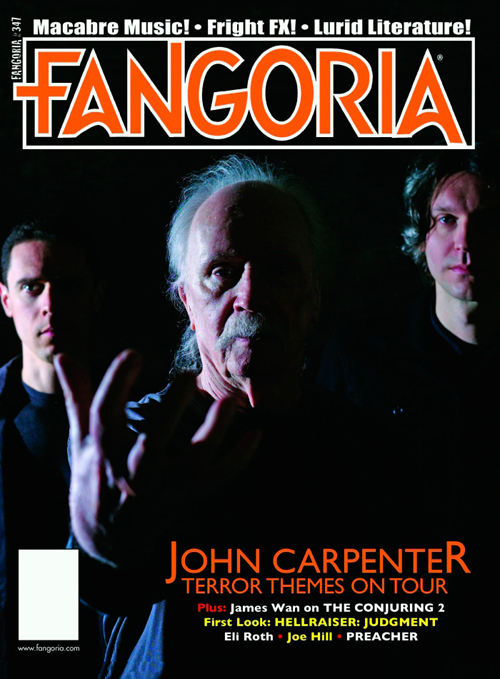 If you want some perspective as to how difficult it is for FANGORIA to acquire advertisers, our print rates are currently over 50% off and we’ve yet to fill our quota for the Kevin Smith issue!

RAVMON: Kevin Smith as guest editor of issue 348 pretty much won the week as far as fans of the magazine go.  How did that come along?

KH: Well, I actually spawned the idea for having Guest Editors in late 2014; I was a huge HANNIBAL fan and read in an interview that Bryan Fuller (creator/writer of the television series) was a FANGORIA die-hard.  So I reached out to him over Twitter, and we soon started emailing about him potentially being our guest editor.  I ran the idea by Chris Alexander and Tom DeFeo, and they both loved it, and so we started putting the pieces together and getting it in gear.

After the HANNIBAL issue did so well and got so much attention, there was instantly more discussion about who the next guest editor would be.  Knowing that Kevin Smith had publicly professed his love for STARLOG, I threw his hat into the ring, and when I saw him moderate the ASH VS. EVIL DEAD panel at last year’s New York Comic Con, I thought there would be few guys more befitting of taking the helm of a fanzine for a month.

It really didn’t become a tangible possibility until early June, I believe, and I reached out to the Smodcast camp through a general contact page.  Soon, the YOGA HOSERS PR team was in touch, and I pitched the idea to Kevin, who had talked about his FANGORIA fandom very recently on COMIC BOOK MEN and via Twitter. Thankfully, Kevin said yes, and it was cemented in stone earlier this month when we had our first production meeting.  Now, we have to finish the damn thing!

RAVMON: With social media and the digital revolution taking charge these days, the horror rag rack has taken its lumps with DIABOLIQUE going on an indefinite hiatus being the latest blow. What does the long-term state of the physical magazine look like?

KH: Basically, the owner of FANGORIA is absolutely dedicated to keeping the print edition of the magazine alive.  But for that to happen, we need advertisers, and if we can hit our ad quota, month by month, there’s no reason FANGORIA won’t live for the foreseeable future.  Personally speaking, I know there’s a lot of internal hope that we make it to issue 400, at the very latest.  But with the industry being as it is, we’ve done our best to digitally supplement our subscribers and readers; it’s not the same, of course, but it’s not fair to our readers, writers, and contributors if we sit on a finished product.

For me, a big part of this is the content of the magazines; like FIELD OF DREAMS, if you build it, they will come.  We’ve got some really exciting covers and content coming our way, and if we can keep our advertising revenue coming in and readers keep coming back, FANGORIA will be back on stands sooner rather than later. 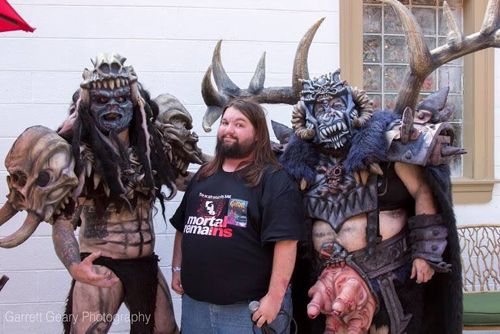 RAVMON: If you could sit down and interview one horror icon, past or present, who would it be and why?

KH: That’s a tough question.  There’s many filmmakers I’d love to interview who aren’t necessarily intertwined with the genre, and many genre veterans I might be too intimidated to speak to.  There’s also the guys who I’d love to speak to, if just for the novelty, such as Rob Bottin or Ken Russell.  But I think the answer will always be Stephen King, whose work transcends medium, demographic, and subject matter.  Remember: there’s a Stephen King movie at #1 in the IMDb Top 250 (above THE GODFATHER and THE GOOD, THE BAD, AND THE UGLY), and there’s no author as instantly recognizable to the genre.

RAVMON: Who were your mentors as you rose up the ranks at FANGO and as a writer in general?

KH: I personally worked with Michael Gingold and Tony Timpone as an intern, and I got to work with Chris Alexander and Bekah McKendry when I became Web Content Manager.  I’d say Gingold was my primary mentor, but Timpone was equally influential, and Chris certainly helped show me the ropes as my responsibilities grew within the company.  I don’t quite know who I’d cite as an inspiration for my writing outside of those guys, although I did go through high school reading the guys over at CHUD, BLOODY-D and AIN’T IT COOL as they helped redefine entertainment journalism.

RAVMON: Any exciting news from FANGORIA coming up that you can share with us?

KH: Well, we’ve got a very exciting issue coming up with the Smith-edited #348; we’ll have an exclusive first look at MOOSE JAWS, we’ll have career interviews with Brian Yuzna and Robert Kurtzman, previews of FX-heavy fright flicks FRANKENSTEIN CREATED BIKERS and THE MIND’S EYE, retrospectives on MOTEL HELL and much more.  Our fall issues are going to be really cool as well, although I can’t reveal much until its set in stone.

Otherwise, we have some exciting stuff going on this fall for East Coast horror fans, and once FANGORIA is back on our feet, we’ll hopefully have more to do, like the sadly belated FANGORIA International Film Festival and the resurrection of GOREZONE.

KH: I want to thank our readers and subscribers for being unbelievably patient, understanding, and loyal.  We’re working extremely hard to get them their owed magazines. If they stick with us for just a little bit longer, I can promise it’ll be worth the wait. 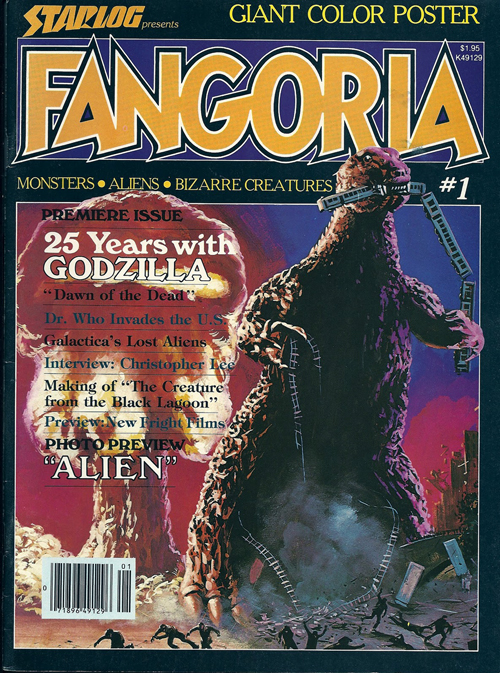