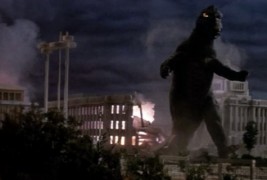 This movie sucks. Because of that, the 1967 South Korean monster movie Yongary, Monster from the Deep was featured on the second season of the Canadian television show This Movie Sucks! Just in case you don’t live as close to the Great White North as I do, then suffice it say that This Movie Sucks! is similar to the much beloved Mystery Science Theater 3000. Both shows delve into the nether realms of poor filmmaking, and they come up for air with biting critiques and enough witty observation to make Jerry “Why Don’t They Just Make the Whole Plane Out of the Black Box?” Seinfeld happy.

Yongary, Monster from the Deep is perfectly tailored for such ironic appreciation. Released during a banner year for real-life horror and violence in Asia (the escalation in Vietnam, the Yom Kippur War in the Middle East), Yongary is the Korean take on the Japanese big-monster movie fad that started with 1954’s Godzilla (a film that, for whatever reason, is being dragged back into the light for yet another big-money American remake). Historically, the Korean film industry was always considered a lesser cousin to Japan’s, even though it can be argued that the Korean silent era was more “golden” than the one across the Sea. But, by the 1960s, Japan was flourishing while South Korea, still reeling from the horrors of the North Korean invasion and subsequent war, was struggling to become part of the neoliberal economic expansion that was then being spearheaded by the U.S. and Western Europe. South Korea advanced fairly rapidly under the dictator Park Chung-hee, but the country’s current status as the cultural and economic powerhouse of Asia is a very recent phenomena.

Not one ounce of anxiety or doubt about South Korea’s future plagues of Yongary, a film directed and scripted by Kim Ki-duk, a jack-of-all-trades auteur who started cutting his teeth in the early sixties with melodramas, war films, and teenager flicks. Yongary was his thirty-third film—an amazing feat for a guy who started directing in 1961. This blue-collar approach to filmmaking made Ki-duk prolific, but it also kept him from creating genuine classics, or, to be fair, even rudimentary potboilers.

As such, Yongary is a laughable train wreck that is only watchable because: a) it’s only seventy-nine minutes long, and; 2) it drips with “Swinging Sixties” kitsch and all the right amount of cringe-worthy moments. Quickly, the plot of Yongary concerns the awakening of the giant lizard Yongary—a fabled monster that everyone seems to have heard about but never believed to be true. What wakes up  Yongary from his mythological slumber is nuclear testing in the Middle East, which sets off an earthquake that heads straight for South Korea. The earthquake is Yongary of course, and the whole film deals with a small cast of characters who each try and find a way of stopping the gasoline-chugging, energy-fueled beast from below the earth.

The first group that we’re introduced to is a nameless couple of newlyweds who are related to the big movers and shakers in science and politics. The omission of names is probably the result of a poor dubbing job—a craptastic piece of work that has the primary South Korean scientist sounding like a bad parody of Sigmund Freud. The chuckles don’t stop there either.  The new husband is an astronaut that gets tasked with keeping a watch on the nuclear test site. This allows for decidedly slow and silly shots of the space capsule as it moves across the atmosphere. That these shots are done with small-scale replicas goes without saying, and all the big, violent scenes in Yongary are likewise done with such carelessness towards naturalism or any sense of meticulous representation.

Then again, if you’re watching a movie called Yongary, Monster from the Deep, chances are you’re not much of a stickler about…anything. Accordingly, Yongary should please you endlessly with its poorly-timed dubbing and its one notorious scene where Yongary, after being showered with an ammonia mixture, starts to shake and shimmy in order to get the foam off of him. Icho (played by Kwang Ho Lee), the smart-aleck eight year-old who is the film’s central character, takes Yongary’s painful movements to be dancing, and for a couple of minutes a generic guitar track accompanies Icho as he trips the light fantastic with the giant lizard.

Icho’s two best pals are his uncle Ilo (played by the handsome Yeong-il Oh) and Ilo’s romantic partner Suna (played by the gorgeous Jeong-im Nam). While Icho is busy pestering people and one gigantic monster with Ilo’s heat wave machine prototype (which looks and acts like a funky type of flashlight), Ilo and Suna try and persuade the cabal of scientists and military men that using missiles against Yongary would be a fool’s errand. The lead general of the film (who is again unnamed) unleashes the missiles after all, and as things go in these films, the military-industrial complex is made to look foolish. In the end, Ilo, Suna, and Icho get their hands on a helicopter, dump Ilo’s special ammonia mixture on the creature, kill it, then immediately feel bad about the whole thing. Icho didn’t want his dancing partner to get the big kiss goodnight, and even at the film’s conclusion, he reminds the South Korean public that Yongary didn’t mean to hurt anyone.

That’s it folks, the monster is dead, Icho is cute as hell, and the pretty couple of Ilo and Suna are getting hitched. It’s not much, but then again what can one do in seventy-nine minutes? Yongary, Monster from the Deep is quick, dirty, and mostly memorable for its flaws. There’s the fact that when Yongary breathes fire, the viewer can see the tube in his rubber throat.  Oh, and one cannot forget the scene when Yongary attacks a military jeep. In that very special moment, Yongary changes color and the entire scene comes close to looking like a film negative. Basically, anything involving Yongary—an awkward-moving creature with glowing eyes and a light-up horn for a nose—is a joy to behold.

So, if you’re feeling a little blue or if you just want to see how far South Korean genre cinema has come in a lifetime, then treat yourself to Yongary, Monster from the Deep. It is in the public domain, so you can choose your method of viewing it. The viewing quality doesn’t matter after all, so drink your fill of this fabulous disaster. 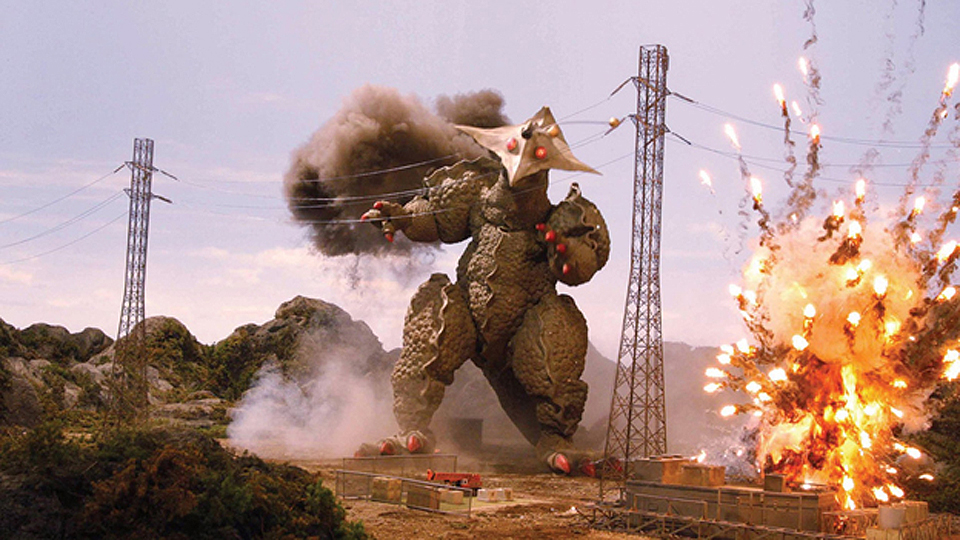