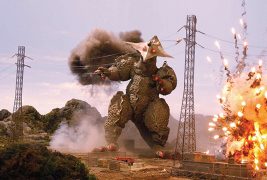 Shochiku is not a name a lot of gaijin know. And why should they? Even connoisseurs of Japanese films are probably not familiar with the company. Founded in the late 19th century, thus making it the oldest film company in Japanese history, Shochiku originally began as the brainchild of two kabuki producers named Takejiro Otani and Matsujiro Shirai. Before long, Shochiku studios began producing short and full-length silent features that put them into direct competition with Nikkatsu studios. In 1931, their first “talkie,” The Neighbor’s Wife and Mine, was released. By the mid-1930s, thanks to the Japanese war effort in China, Shochiku became the Shochiku Corporation after several successful mergers.

All this good momentum came crashing down after 1945. Because they made pro-Japanese propaganda throughout the war, the occupying American forces charged Otani with Class-A war crimes. In the following two decades, Nikkatsu sped far ahead of their rivals by producing youth-oriented action and crime films like A Colt Is My Passport and Rusty Knife. Also, while Nikkatsu and other companies embraced the so-called “New Wave” generation of directors, Shochiku lagged behind as an “old fashioned” relic.

To combat this stigma, the company produced four unique films between 1967 and 1968. While these films did not save Shochiku in the long run (ultimately, it and Nikkatsu resorted to producing soft pornography known as “pink films” in the 1970s and 1980s), they nevertheless remain important artifacts of postwar Japanese culture. More importantly, as features, each one of these films presents an engrossing mixture of horror, science fiction, politics, and absurdity. You gotta love Japan.

The X From Outer Space

Shochiku’s first attempt at breaking into the youth market was fairly conservative. After all, the kaiju, or “strange beast” craze had proven to be lucrative ever since 1954’s Godzilla. In the following thirteen years, kaiju films made in Japan and South Korea continued to rake in the big bucks in domestic and foreign markets. So, when Shochiku set out to make The X From Outer Space, they probably dreamed of dancing yen. 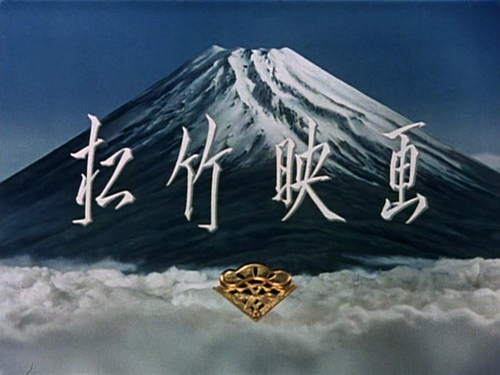 The film’s plot is disarmingly simple. A “space boat” called the AAB Gamma travels from a Japanese space base on the moon to Mars in order confirm recent UFO sightings in the area. The ship is commanded by the handsome and brave Captain Sano (played by Shun’ya Wazaki). Also onboard is Lisa, a blonde American played by actress Peggy Neal. Lisa’s presence presents a bit of a conundrum, for Lisa loves Sano, but Michiko (played by Itoko Harada) loves him too. This love triangle involving the captain, a female astronaut, and a moon base controller plays a predictably large role in film’s moments of melodrama.

However, The X From Outer Space, like all good monster movies, is about a monster. While traveling through space, a globular spore attaches itself to the skin of the AAB Gamma. The specimen is scraped off, sealed, and is scheduled to be shipped off to Earth to complete a scientific analysis. Unfortunately, before responsible people in white coats can get a good look at it, the specimen breaks loose, grows exponentially, and becomes Guilala—a hammer-headed monstrosity that looks like a cross between a praying mantis and a chicken. Guilala goes all Godzilla on the island of Honshu by destroying buildings, crushing people, and forgetting to clean up his hotel room. I kid, I kid. But, seriously, Guilala, a fire-breathing space dinosaur that drinks nuclear energy for fuel, is a real menace. The Japanese Self-Defense Forces can’t do anything to stop him, nor can the U.S. Air Force. The only thing that can halt Guilala’s progress is “Guilalalium,” a chemical substance made up of moon rocks. As hokey as it sounds, “Guilalalium,” or pressurized moon rocks in bomb form, actually works. Not long after the bombing runs start, Guilala begins to foam at the mouth and ultimately shrinks back down to spore size. 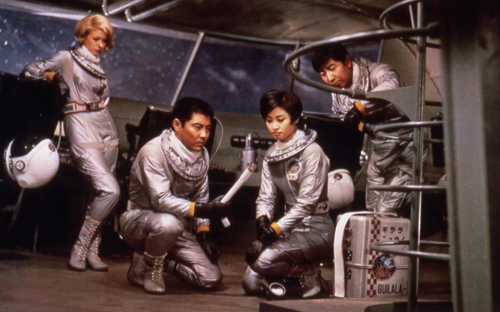 The X From Outer Space is good-natured goofiness. Even when it tries to titillate, such as when director Kazui Nihonmatsu puts Lisa and Michiko into the same shower, the film comes across as Swinging Sixties silliness. The most interesting thing about this schlock masterpiece is the globalist, technocratic world it presents. Alongside the crew of the AAB Gamma, which somehow includes the bumbling dork Miyamoto (played by Shin’ichi Yanagisawa), the citizens of the moon base and Earth include both Western and Asian scientists, generals, and technicians. Chief among these white-collar heroes are the stoic Dr. Kato (Eliji Okada) and the goateed Dr. Berman (played by German actor Franz Gruber). While Dr. Kato provides the expertise (and a few lines about the dangers of nuclear power), Dr. Berman gets the girl when Lisa abandons her love of Sano so that he and Michiko can be together. Sappy, yes? But a damn fun film nonetheless.

Goke, Body Snatcher from Hell is not as cute nor as zany as its predecessor. However, despite this film’s weirdness, it follows a well-worn cinematic formula. Namely, director Hajime Sato’s film is about a race of insidious aliens who want to punish earthlings for all their warmongering, racial strife, etc. This film, which was released in the turbulent year of 1968, is Cold War liberalism—its fears, its internationalism, and its moral compass—encapsulated inside of an odd genre flick.

Following Air Japan Flight JA307’s crash landing on an unknown desert landscape, the plane’s crew and passengers begin to slowly realize that an otherworldly monster is out to get them. The passengers present a tableau of late 1960s culture. There’s a radical young terrorist armed with a bomb. Not far from his seat is the professional assassin who just hours prior killed the British ambassador to Japan. Elsewhere throughout the now stranded plane, Japanese and Western societies come into contact via members and victims of the dreaded “military-industrial complex.” The only people trying to hold everything together are the pilots Sugisaka (Teruo Yoshia), his superior (played by Hiroyuki Nishimoto), and the stewardess Kuzumi Asakura (played by Tomomi Sato). These three represent honor and humanity, while everyone else around them succumbs to suspicion and their baser instincts.

When, in quick succession, birds begin committing suicide by flying into the plane’s cabin and the pilots get word that there’s a bomb onboard, the panicked passengers start questioning each other in order to resolve the worsening crisis. To calm everyone down, Sugisaka begins a thorough bag search. Senator Mano (played by Eizo Kitamura), a corrupt worm of a man who represents the Constitutional Democratic Party, is cleared. Next to be cleared is Mano’s toady Tokiyasu (Nobuo Kaneko), an international exporter of weapons. After him are Noriko (played by Yuko Kusunoki), Mano’s abused wife, and the space expert Professor Sagai (played by Masaya Takhasi). It is Professor Sagi who first suggests the idea that the plane’s predicament is the result of an extraterrestrial invasion. By the time they find the bomb in the hands of Matsumiya (played by Norihiko Yamamoto), it’s already too late. The Gokemidoro, a race of genocidal space vampires, have already claimed the mind of the unnamed assassin (Hideo Ko). From here on out, the Gokemidoro, who broadcast their murderous intentions through Noriko, slither their way into the minds of each passenger in one way or another. In some instances, they drive them crazy with desperation, such as in the case of Mrs. Neal (Kathy Horan), the blonde widow of an American G.I. whose face was destroyed by napalm. In other instances, the Gokemidoro corrupt their victims by literally taking over their bodies. You see, in their true form, the Gokemidoro look like silver slime. In this state, they slither up towards the foreheads of their victims, then open a hatchet-sized wound and pour in to achieve possession. 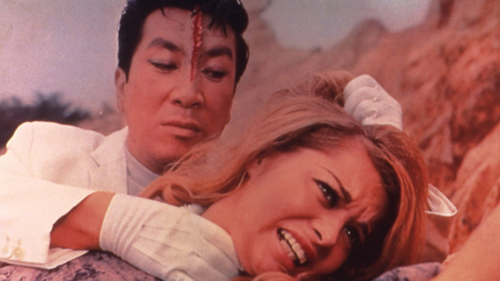 Space aliens, blood drinking, and a depressive ending that includes a full-scale Gokemidoro invasion—Goke, Body Snatcher from Hell may be Shochiku’s best sci-fi/horror mash-up. Even the sociopolitical commentary, which often includes stark footage taken from then contemporary battles in Vietnam, is well done. The only drawback is the sometimes-ludicrous dialogue. Don’t let that stop you, by any means. Goke, Body Snatcher from Hell is must-see Shochiku.