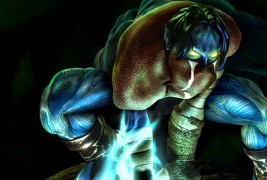 For all my bashing of Stephanie Meyer, I have to give the devil her sparkly due–I thought vampires were lame long before Twilight came out.  Back in 2002, I declared one drunken night to my buddy Alex, “I have an axiom.”  I said it in the voice I thought I would reserve for the day I became jarl of a mighty Judeo-Norse empire and was called upon to make a proclamation.

“What’s that?” asked Alex.  He didn’t reach immediately for a stylus and parchment, so I was forced, ignominiously, to hunt for a pen and scribble on the wall:

“Anything involving vampires or elves will invariably suck.”

(This was right under a previous Hunterian axiom that anything involving teenagers and the supernatural would invariably suck as well.)[1]

“I dunno, dude,” said Alex. “Have you ever played the computer game Soul Reaver?”

“Does it involve vampires?” I asked, all suspicion.

“Yeah, but they’re monstrous vampires,” he said.  Having been my roommate for a year and a half, Alex knew that things involving monsters were more likely to marshal my short attention span. “The whole idea is that vampires evolve over time, so even though they start out looking human, they never stay that way.”

“Vampires are normally burned by water, but there’s a clan that evolved to be immune to it, and they look degenerate and fish-like.”

Ah, “degenerate” and “fish-like:” my two magic words.  See, I hated vampires because I hated both sets of clichés surrounding them.  Vampires, in my experience, broke down into two equally boring camps: you had the angsty, Byronic, totally non-fear-inducing Interview with the Vampire type, and the bro-fest, WWE-with-fangs, similarly unscary Blade type.  And then sometimes, just to add a bit more garlic to the mix, there were franchises like Underworld that somehow managed to pit club-kid vampires against fratboy werewolves, elegantly mixing the two.[2]  Vampires were fucking boring, whether you subscribed to the Mars or Venus version.

But then there was Soul Reaver and its sequels, the Legacy of Kain games.  Suddenly vampires weren’t just a question of, “Do you want to hear about my Toreador goth who cuts himself after he feeds?” but, “Which is more horrifying: spider-like vampires who webbed up an ancient monastery in service of their room-sized clan lord, or Orlok-like vampires who have to wear the hides of their flayed victims to keep from falling apart?”  Into this desolate and apocalyptic world walk the malevolently regal vampire Kain and his vengeful former lieutenant and progeny Raziel, now a tattered wraith who feeds on souls rather than blood.

Soul Reaver was actually the second game in the Legacy of Kain series (following 1996’s Blood Omen), and from the beginning, software company Silicon Knights had intended to make a series for grown-ups.  Starting with Soul Reaver, the series was directed and written by designer Amy Henning, and therein, Savage Readers, lies its secret.

Video games could be art.  When film first appeared, people would pay good money to watch movies of people getting on and off subways.  Technologically amazing, no doubt, but hardly art in terms of cinematography.  A few decades later, cinema already had its first classics.  Many, tellingly, were early horror movies like The Cabinet of Dr. Caligari and of course, Nosferatu.  Far be it from me to taint Women in Horror Month with sexism, but the artistic problem with the whole video game industry is that it is focused on appeasing the appetites of adolescent boys: power fantasies laden with shitty superhero dialogue and lots of hawt chixxx.  If a game is made to appeal to a female audience, it’s invariably some pony-laden Barbie-fest that couldn’t possibly engage any thinking woman over the age of twelve.  This is where Henning’s genius just may have given interactive entertainment its Nosferatu.

Amy Henning, a UC Berkeley graduate with a degree in English, began working in the world of video games in the 1980’s and is still writing, directing and producing now, albeit with Naughty Dog entertainment rather than Silicon Knights.  With a thorough knowledge of literature and a distinctly no-bullshit attitude, Henning took what could have been just a fun series about vampires and made it into the first truly literate video game.  Starting simply as Raziel’s quest for vengeance against Kain, the overlord and vampiric father who betrayed and maimed him, the Soul Reaver series became a fantastically convoluted meditation on time, paradox and the question of free will. 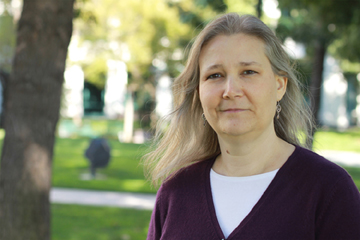 I don’t believe in picking away at every work of art for its symbolism and metaphor and allusion like a baboon racing to find the fattest nit in its troop-mate’s fur.  But I do think that all real art has more going on than just what you see on the surface, and Henning’s series has a richer symbolic subtext than most novels I have read.  Steeped in ideas inspired by the Gnostics,[3] the canvas upon which she drew her story became bigger as time went on.  By Soul Reaver II, Raziel and Kain begin pursuing each other through time, attempting to stop the plans of scheming wizard Moebius and his secret master, a Lovecraftian deity called simply “the Elder.”  Each of these archetypal characters (and yes, when I think of vampires, I now think of Kain and Raziel before I think of Dracula or Lestat) is bolstered by Henning’s masterful dialogue and the incredible voice-acting of Michael Bell, Simon Templeman, Tony Jay and others.

Kain.  Raziel.  Moebius.  Michael, Simon and Tony.  He, he, he, he, he and he.  If Henning created a game that goes beyond the man-child fantasies of the medium, where are the women?  There are only a few female characters in the entire series.  You never play as any of them, and screen time is dominated by the men.  There’s no Girl Power here; what’s so revolutionary about another game about men, for men, even if designed by a woman?

When I was an angry young guy in college, frustrated by circumstance and insecure about my place in the world, I loved Raziel and Kain because they were exactly where I was.  Besieged by questions of destiny, vengeful, frightened Raziel and short-tempered, contemptuous Kain were beings I could identify with.  Sure, there was the power fantasy of being a bad-ass vampire, but what makes me remember Soul Reaver and its sequels with such affection is its powerful, intelligently written characters, neither generic medieval warriors nor sex symbols nor unidentifiably courageous and well-trained space marines, spec ops or ninjas.

Reading a message board once, I saw a post from a young mother who said she identified with Raziel because she knew what it was like to be betrayed by someone you loved; conversely, she identified with Kain, father of five other vampires, because she understood how hard it was to be a single parent.  I could be wrong, but I don’t think anyone talks this way about Halo.

Amy Henning was the driving creative force behind all the Legacy of Kain games except two: the original Blood Omen, which she worked on as a writer, and the “sequel,” Blood Omen II, created, produced, and marketed by a different team altogether.  It shows.  Henning’s Kain is majestic, diabolical and viciously charming.  His horned head and cloven hands may not make for a sex symbol, but they lend him an appealingly Faustian charisma.  You can’t help but like him even as he slaughters his way across the continent of Nosgoth, killing enemies and innocents alike.  Blood Omen II‘s Kain looks like a pale-skinned Fabio.  The explanation, of course, is that he’s younger–unevolved.  But we who’ve been playing along at home know it’s because the slavering horndogs for whom the designers included buxom vampire Umah, whose every line sounds like a come-on (“Do you wish to feed, vampire?”) don’t want to picture her fucking a scarred, green-skinned monster with murderous eyes and a Mephistopheles smile.  And the funniest thing?  The whole time I kept thinking how there was no way that Kain, our Kain, would go for some slutty bimbo like Umah; Kain would need a queen as daring, grandiose, ambitious and bloodthirsty as himself–a woman between Elizabeth I and Lilith.  Ms. Henning, you clever devil; your game about men, for men, tricked us all into expecting nothing less than fully human women.

But then, it isn’t really true that the Legacy of Kain games are only about men.  At the center of the entire cycle of Raziel and Kain’s adventures, sits Ariel, the Guardian of Balance.  Murdered centuries before, Ariel’s ghost contains the essence that will prevent the decay of Nosgoth.  Half her face is rotted off like Hel, the Norse goddess of the dead, and she waits for our heroes to run around and around in circles until they figure out what she already knows.  The purity of Nosgoth, the thing that makes it live, that cuts away the illusions and horrors of the Elder, lies within a woman.  What’s that about art and life?

[2] I’ve fallen asleep through every Underworld movie I’ve ever seen–and that includes once when somebody put it on at a previously rollicking party.

[3] An early Christian group, the Gnostics had some fascinating notions about the Bible.  Most Gnostic groups believed the material world to be sinful in its entirety, a place so impure that God had to debase Himself thirty-two times just to create it.  This sub-deity, the Demiurge, aided by his demonic archons, stood between mankind and the knowledge (gnosis) that alone could bring freedom from the prison of material life. How weird did the Gnostics get? Some sects thought the most admirable character in Genesis was the snake, because it made mankind more knowledgeable and thus freer from the Demiurge. 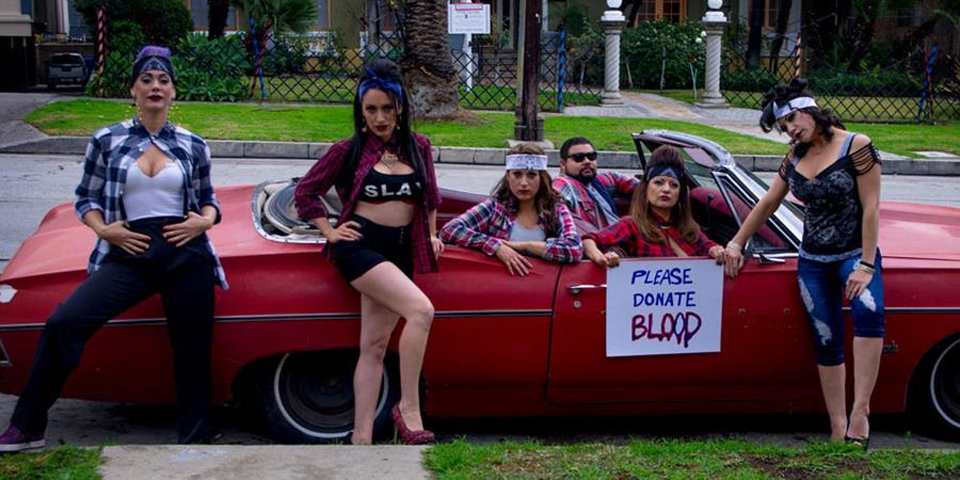