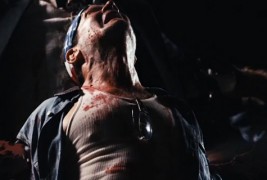 Paper Street Pictures president and founder Aaron B Koontz is a writer first.  Like many writers, this scribe included, storytelling knows no bounds and as is often the case, the love of storytelling via cinema usually takes hold like an insidious virus and eventually overruns the system.  Such is the case with Koontz.

A couple years ago he and three friends decided to pool together their talents and resources and have a go at making the types of movies they’re fans of—movies with rich characters, compelling plots, and…well?…blood.  So far Paper Street Pictures has remained in the short film business, having produced a dynamic array of shorts that all have a genre bent while offering very different scary strains including the explicitly terrifying Malevolence as well as the (purposely) hysterical The El Chupugcabra.

The quality coming from Paper Street Pictures is undeniable as Koontz and crew proudly and competently carry the torch of the Austin, Texas indie film culture.  Ravenous Monster recently caught up with the fast rising auteur to talk horror, movie-making, and the future of Paper Street Pictures.  Read on, Horror Fans….

RavMon: Tell me about your production company, Paper Street Pictures.

Aaron B Koontz: I formed Paper Street in April of 2011 by bringing together 3 other friends with the goal of getting back to my true love of filmmaking. We wanted to start with short projects at first and essentially up the ante with each project but keeping the focus on the Horror/Thriller variety.

RavMon: The El Chupugcabra is a comedy. Malevolence is a horror movie. They couldn’t be any more different. Do you personally, or all of you collectively, have a default style or genre of preference?

ABK: Well, while ‘Chupugcabra’ is definitely a comedy it is also still quite horrific once all hell breaks loose. Malevolence was really just a starting point for us, something simple, something that’s all [shot] at one location but still involves a few special effects and  the like that in our past we had yet to tackle. And again, we are definitely genre filmmakers but want to evolve beyond the stereotypes that come with that. Not sure if we are there yet but with future projects that is a definite goal.

RavMon: How do you fund your short films, these two films in particular?

ABK: All of our projects to date have been self-funded by the members of Paper Street.

ABK: This has been a goal since we first formed the company and we’re proud to announce that we are officially in the final stages of pre-production for a Horror/Thriller feature that will be shot here in Austin in early 2014. We can’t go into too much detail just yet but we have some amazing talent both in front and behind the camera working with us on this and couldn’t be more excited about the prospects.

RavMon: Tell us about being an indie filmmaker in Austin, TX.

ABK: Austin is such an amazing, vibrant film community. There is talent around every corner including what in my mind are some of the best true indie filmmakers in the country. Just look at the long list of films tied to Austin at Sundance last year to get a glimpse of how special this is. Throw in great genre festivals like Fantastic Fest and the new Housecore Horror Festival, which Malevolence just played at, and I can’t picture myself being a filmmaker anywhere else.

RavMon: What was the catalyst for your decision to pursue filmmaking?

ABK: I think my first love was simply writing in general but it took me a while to connect that with my obsession with movies. Throw in a healthy love for music and photography and in the end I think I just sought out a medium that combines all that. Where else do you have traditional artists, graphic artists, musicians, writers, actors and photographers all working collaboratively for one end goal? It’s a special art-form and one that I feel completely in my element at. I think it’s rare for many of us as adults to find what we are truly passionate about and I consider myself lucky to be one of those few.

RavMon: Do you have a day job?

ABK: I used to run a Quality Assurance studio for a large SF based game company that had an external presence here in Austin and during each of my last productions I held that position while making these films. In June of this year they decided to close the majority of their external studios and I was forced to close down my operation as well. I decided to take this as an opportunity and have now dedicated myself to Paper Street and filmmaking full time. This is what has allowed us to be ready to head into production for our aforementioned feature this January. It’s a huge risk but it’s a risk that I would regret for the rest of my life if I didn’t take it.

RavMon: Which stories, regardless of medium, inspired you to become a storyteller in your own right?

ABK: While I prefer a visual medium, the works of Lovecraft, Easton Ellis, Salinger, Palahniuk (Fight Club is where we derived our Paper Street name) and more have all had various influences on my writing.

RavMon: Whose work inspires you now?

ABK: I am increasingly impressed with the growing number of indie genre filmmakers today. I was fortunate enough to go to school with a few of these [filmmakers] and their success has had a direct influence on my desire to re-enter the filmmaking space. Adam Wingard’s You’re Next and V/H/S 1 & 2 and Evan Katz with his directorial debut of Cheap Thrills are a few films that are a major driving factor in what I am doing. Other filmmakers that have had a profound effect on me include David Cronenberg, David Fincher, Michael Haneke, Wes Anderson, Danny Boyle and Paul Thomas Anderson.

ABK: Right now I am on a RED kick although there is still a part of me dying to shoot something with an Alexa. Again, back to the Austin film community, I have been fortunate enough to partner with some extremely talented folks that handle all of this for us. With Post, I am the primary editor for all of our films and have a talented sound designer that I trust to help give life to our images. One of Paper Street’s partners, Alex Euting, also will assist here with some VFX editing and After Effects.

RavMon: Are you more of a visual director or do you focus more on your cast’s performances?

ABK: Is it a cop-out if I say both? I really want to spend time with my DP going over every single shot we have, pushing us to have our camera be a character in and of itself. The visual side here is so key and I have a look and feel that is imperative to be properly conveyed, one that usually is in my head during the first drafts of the script. But then, once I am on set it is all about the performances. I want to then trust the smart people around me to allow the Pre-Production work to take shape and then work and focus on empowering my talent and make them as comfortable as possible. I don’t want to be distracted from their concerns so that I cannot only witness but feel their performances and help us reach something special. In the end, the most beautiful imagery and all the pre-production in the world can’t save a bad performance. And if you as a director aren’t there for your actors then you are more to blame than them for anything lacking.

RavMon: Not a cop-out at all…good answer.  If you could cast any actor in one of your movies who would it be and what would they play?

ABK: My dream actor would be Daniel Day Lewis but honestly I’d be too afraid to even be near that man let alone actually direct him. He’s on another plane in the acting world in my opinion. But, and this may be a shock to many, I’d love to make a coming-of-age story based around the ‘90s punk and alternative music generation with a young Paul Dano playing the lead. How’s that for a self-proclaimed genre filmmaker?

RavMon: There’s certainly room for a Dazed and Confused for this generation, your genre cred notwithstanding.  Tell us about your locations for Malevolence. It appears you’ve trashed a house, complete with wooden floors and nice, pristine white walls. Is this true or was that just movie magic?

ABK: It’s funny, the trashing of this house is brought up after every screening, it seems. We actually shot this all at Alex Euting’s home. And yes, the blood was everywhere as I am a stickler for practical effects. It was a long enough shoot but we ended up staying there literally all night just cleaning up after. We got most but to this day if you were to step into this house you can still find a blood drop here or there we missed. His girlfriend was very gracious with her home, though she wasn’t too happy about all the leftover blood. I, though, like to think we added character to the place.

ABK: One thing that I take pride in with Paper Street is that we are always keeping busy. Our next project is the Horror/Thriller feature that I will be able to make some big announcements on very soon. We also are in post for a medium length thriller called Aperture. After those, we have yet another genre feature film currently being written, a long overdue music video that we previously had to put off for the Chicago-based band Minor Characters and a hyper stylized gritty short called Honor Student. And we hope to complete all of these in 2014. Crazy? Probably so.