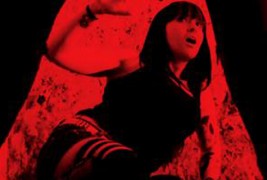 I’ve received a fair number of screeners over the years, most of which contain movies of the ultra-indie variety.  There’s an inherent excitement to popping in a Sharpie-inscribed DVD-r, sitting through whatever it may contain, and then after a bit of objective analysis, discovering the opinions that manifest on the other side.  The results are absolutely unpredictable and that’s what’s exciting.  It’s also a sometimes-perilous blade of a double-edged sword, or a machete as is usually the case.

The means of producing media have been made cheap, available, and relatively easy to use as a result of the Digital Revolution.  The proliferation of books, music, and movies made by people with an abundance of creativity, a little ingenuity, and access to a computer has opened up vast swaths of the underground – the untamed frontier of media ready to be discovered and explored by those of us who are discerning counter-culturists, and purveyors of the weird.  As for everybody else?  Well, they’re always welcome, but the underground doesn’t need mainstream fans to exist and vice versa.  They have American Idol to keep them occupied, and the underground can be a dangerous place, after all.

To illustrate the point, the latest screener I received is a movie by Kristoff Bates of HorrorMerch.com and musician Kyle Severn.  AFTER PARTY MASSACRE is a grind house-style horror flick made by a crew of horror enthusiasts and death metal musicians – two huge constituents of the underground.  The film embodies everything the underground belches forth, both good and bad, and all the while it infectiously and unapologetically relishes its own gory violence and sleaze as well as its own existence, for that matter.

AFTER PARTY MASSACRE follows Kyle Severn, drummer for the band Incantation, as he prepares for a gig.  He gets tattooed, calls up a handful of gothic groupies, makes his way to the club and unleashes some pummeling old school death metal.  Along the way, we’re privy to the lecherous shenanigans of various roadies, we see how Kyle and his crew interact with the female fans, death metal’s version of the spotted wood owl, and we see the bands Soulless and Incantation throw down some brutal tunes.

The thrust of this movie occurs when one of the aforementioned female fans is assaulted by an overzealous predator lurking outside the ladies room.  She survives and promptly dispatches her assailant.  For one reason or another, she decides to keep going, methodically stalking and murdering random people.  As the bands play, various people continue to meet their bloody demises and once the show is over, the movie inevitably culminates in its titular event – an after party massacre.

Let’s start with what AFTER PARTY MASSACRE does well.  This film is technically very well made.  The production values, most notably the sound and cinematography, are at a level of quality sometimes missing from movies of this stature.  The crew appears to have gotten a hell of a lot of bang for the buck.  Every shot looks good despite several scenes filmed in a variety of difficult lighting conditions, and the sound design and integration of the soundtrack is on point, as it should be considering Severn’s area of expertise.  Not only that, but Bates and Severn’s direction and cinematography is ambitiously stylized, providing us with enough editing flare to keep things interesting.  And most importantly, the vast majority of the film’s FX shots are satisfyingly sloppy and convincing, as well as CG-free which adds a touch of nostalgia and a grimy old school aesthetic to the kill scenes.

The areas in which AFTER PARTY MASSACRE fall short are common in many films made by people who aren’t schooled in the tried and true methods of moviemaking, namely bad storytelling, and to a lesser extent, bad acting.  In this particular case, the latter is caused by the former, i.e. the problem isn’t necessarily bad acting as it is no acting.  It’s obvious that this film wasn’t culled from a typical screenplay, the source from which experienced actors cultivate the lives of their characters.  All of that story-telling mumbo-jumbo is an afterthought and most of the characters in this movie are merely playing themselves.

At its best, this movie is an example of what ambitious horror fans equipped with some talent and technical know-how can achieve by virtue of those talents, as well as some resourcefulness, and quite a bit of hard work.  However, this film’s success is undermined by its inability to deliver a fundamental narrative component.  And while AFTER PARY MASSACRE competently functions as an over the top, bloody vehicle for the various underground bands included on the soundtrack, it doesn’t tell a story.  So, unless you’re a death metal fan, there isn’t much substance here for anyone interested in a compelling yarn.

If AFTER PARTY MASSACRE is a harbinger of things to come, then good things can be expected from Kristoff Bates and Kyle Severn, and that’s good news for fans of indie horror.  In fact, if this duo had paid their script the same attention the rest of the project received, they certainly could have made a big splash on the horror scene, a messy crimson one at that.  Their potential for legitimate, quality horror movie making is obvious and impressive, but it’s not realized here.