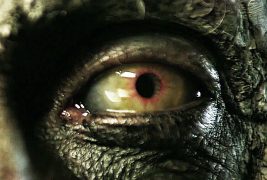 Patrick Rea isn’t the type of filmmaker who rests on his success and lets his film catalog speak for itself.  He’d rather be creating constantly, pushing his limits and building on what is already an insanely impressive resume.  With a jaw-dropping 48 director credits to his name since 2001, Rea is one of the most recognized and well-respected faces in the independent horror film community.

A native of Nebraska, Rea made a name for himself in 2004 when his short A Man and His Finger was featured on Fangoria’s Blood Drive DVD.  From that point on, Rea has been one of the most prolific men behind the camera on the scene.

I don’t think I’m going out on a limb here by assuming most folks reading this are horror nuts and have probably seen Rea’s uber-creepy fright flick Nailbiter, which has seen some really good air time on Chiller here in the U.S. and The Horror Channel in the UK.

Right now, it’s all about the Arbor Demon, though.  The film stars Fiona Dourif, Rob Bouton and Jake Busey, who must fend off a horrifying creature.  In the middle of the woods.  In a tent.  Ladies and gents, that’s about as good as it gets right there.  Judging by the buzz the film has generated since it started the film festival tour late last year, Rea brings the goods by the boatload!

I’ve had the fantastic pleasure of chatting with Patrick in the past and it’s always a blast.  Recently, I had the chance to catch up with Rea on everything from his latest project, Arbor Demon, to what the future may hold for a Nailbiter sequel.  He also tells me what it’s like to spend a few days in a tent with Jake Busey.  Yeah, Patrick Rea is a man of one thousand tales and the horror world is damn lucky he’s so willing to share them with us!

Ravenous Monster:  Since we last spoke, you’ve had quite a bit of pretty cool news going around.  It was very cool to see Nailbiter on Chiller!  What’s it like to know your work is being seen all over the world?

Patrick Rea:  It’s been very exciting and a tad scary.  After your film is released, you just hope it can maintain a life of its own in some capacity.  So, it’s been rewarding to see Nailbiter air on The Horror Channel in the UK and also Chiller here in the U.S.   My only wish is that the film continues to gain fans, so I can make a proper sequel.

RavMon: Arbor Demon is getting a lot of attention and it premieres later this month at Panic Fest in Kansas City (January 27-29). This film looks absolutely awesome and I can’t wait to see it!  It seems this was a pretty ambitious film due to the heavy shooting schedule outdoors. What was filming like?  Were there any issues with bad weather?

PR: We shot the film in Charleston, South Carolina in the month of December, but surprisingly the weather was great.  It was sixty-degrees for the majority of the shooting schedule.  Where we ran into some challenges was with the sun setting early in the day.   There were days in the woods, where the sun would become totally unusable by 3:30pm.  One day in particular we had to artificially light the forest to finish a few of the key daytime scenes.

I had storyboarded the film and had quite a few shots to capture during daylight hours, but at some point I had to decide what we absolutely needed to tell the story.  Half of the film’s schedule was outdoors, while the second half was lensed on a sound stage for all the tent interiors.  This allowed us to better control our environment, lighting and sound.

RavMon: The film has some real star power in it.  How did Jake Busey and Fiona Dourif get attached of the project?

PR: We were very lucky to cast some great actors like Jake, Fiona and Kevin Ryan.   All three actors were sent the script written by Michelle Davidson and myself.  Thankfully, they really responded to it.   At the point of casting, we were all neck-deep in pre-production out of Charleston, so the actors flew in from Los Angeles and immediately got to work.  They understood that it was a very tight schedule, so they came very prepared, adding their own layers to the characters.

RavMon: How long was the shoot?

PR: The shoot was a brisk 12 days.  Fortunately, there had been a lot of pre-production leading up to principal photography.   I had spent a few months before, storyboarding the film in Kansas City, as well as working with Megan Areford the make-up artist, to test and perfect the look of the creature.  The heavy preparation allowed us to take on such a truncated schedule.  It also helped immensely that the film had very few locations.

RavMon: Claustrophobia is clearly a wonderful tool to use in horror films.  Did you come across any challenges when it came to filming inside a tent?  I imagine it would get pretty cramped in there!

PR: One of the challenges of shooting inside a small location like a tent is keeping it visually interesting to the viewer.  The film’s DP, Harry Lipnick, did a stellar job of making the scenes within the tent interior look slightly different, so it didn’t get repetitious.  I also think that one of the biggest hurdles of making any container horror film is getting the casting and performances right, so that you can keep the audience engaged while confined to a small space.

And yes, the tent was definitely cramped.  Jake Busey’s character Sean spends a good amount of the film wounded inside the tent and he’s about six feet tall.  We also had to fit Fiona, Kevin, the DP, assistant camera operator and audio guy inside.  Once someone needed to go to the bathroom, everyone had to get out and then we had to reset the tent, and any props that might have gotten shuffled around.   Jake, especially, had to have his bandages and splint put back on each time he exited.  So, a typical trip to the bathroom for one actor could result in a 30-minute break for the crew.

RavMon: The demon looks downright awesome.  How did you come up with the look of your monster? 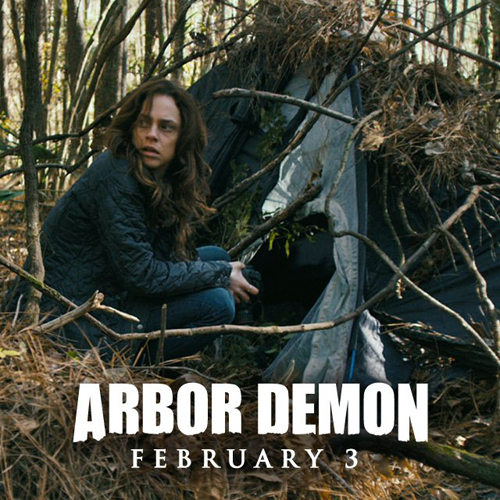 PR: The creature was something that Michelle Davidson, the co-writer and I had to really focus on coming up with.  We had earlier drafts of the script where the biggest note from the table reads was ‘how do we make the monster more interesting?’ Michelle and I, over several writing sessions, finally cracked an idea that involved making the creature look like it was part of the trees.

I then created some sketches of how I saw the creature design.  Eventually the make-up artist, Megan Areford and I collaborated on getting the make-up and prosthetics where we wanted them.

RavMon: Are you a big fan of urban legends in monster stories?  Are there any from your childhood that have stuck with you throughout the years?

PR: I have always been a fan of monster stories in general.  Some of my favorite memories are watching creature features like Alien, Aliens and The Howling.  I used to read the Scary Stories To Tell In The Dark series of books as a kid as well as watching Tales from the Crypt on HBO.  As for urban legends, I never really grew up with many.  I was born and raised in Schuyler, Nebraska, so we had to go to the local video store to rent horror movies, or make up our own ghost stories.   We did however, have one story about a mysterious town near Schuyler that supposedly had a population of ‘one’.  The town was appropriately called Rescue, and legend had it that the lone occupant tied people up in his basement and would shoot at anyone passing through.   This was a big myth when I was in high school and kids used to venture into the country on the weekends searching for the elusive town.  I’m not sure we ever actually found it, but it was fun to look for.

RavMon: As a filmmaker, are there any topics or subject matters that you simply will not touch?

PR: That’s a tough question.  I’m getting to the point where if a subject frightens me, I’ll be more interested, so I can stretch myself.  There are definitely subjects I’m more attracted to than others.  I’m very compelled to do a sci-fi/action film in the near future as well as a ghost story ala The Fog.  However, I don’t see a sweet romantic comedy coming down the pipeline too soon, but you never know.

RavMon: I assume your schedule’s pretty busy all the time, especially with a new film recently hitting the film festival circuit.  Do you have any downtime planned in the near future? 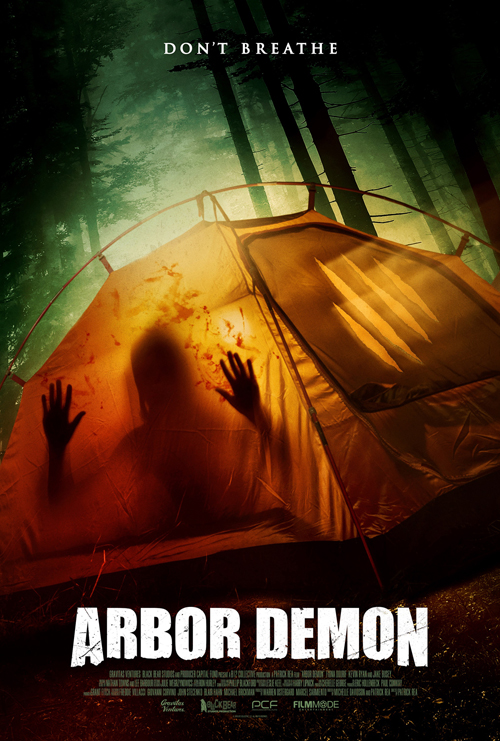 PR: The film premiered at FrightFest in London in August of 2016, under its original title, Enclosure.  It also has screened at festivals such as St. Louis International Film Festival, Razor Reel in Belgium and The New York City Horror Film Festival.  Its next festival screening is Fantasporto in Portugal, again, under the title Enclosure.

The film, now re-titled Arbor Demon in North America, will have an official release through Gravitas Ventures on VOD and in select theaters, February 3rd.   I’m very excited and happy for the cast and crew who worked so hard on the film.

RavMon: I must ask, as you touched on it earlier, is there already a script for a Nailbiter sequel?  This news excites me to no end!

PR: There is indeed a script for Nailbiter 2.  The biggest issue is that it’s a very expensive sequel, because it’s on a much larger scale with more effects and characters.  I kind of decided to write the script as if I had no restrictions.  Only time will tell if I’m able to make it as written or if I’ll have to scale back slightly so it can become a reality.

RavMon: Are there any other projects you are currently working on?

PR: I’m finishing a new short film titled Justice Served which is a Twilight Zone-style courtroom story.  Hoping to have that on the festival circuit soon.   Meanwhile, I’m editing a family feature film that I directed last summer, as well as working on a really fun CBS kids show titled The Inspectors.

My next horror/suspense feature I hope to make is a fresh spin on the imaginary friend story.   Fingers crossed we can get that into production this year.

Arbor Demon will be available on Video on Demand on February 3!