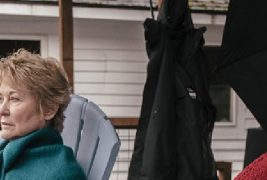 From the creative mind of writer/director, Elias (Gut, Dark, The Horror of H.P. Lovecraft), and the fine folks at The October People, comes a weird tale of grief and loss called Ayla. I was interested in this film from the get-go as I’d seen that the cast included horror favorites such as Dee Wallace (The Howling), Tristan Risk (American Mary) and the fantastic Bill Oberst, Jr. So, with a great cast and an interesting storyline, did Ayla make me hide under my blanket, or did I wrap the blanket around me and fall asleep? Stick around and find out.

Essentially, we have Elton (played by Nicholas Wilder), who’s deep in grief over the loss of his little sister, take a guess? Yep, Ayla. Apparently, Ayla died when she was young, and Elton seemingly can’t deal with her being gone. He tries to be a functional member of society. He has a lovely girlfriend (Sarah Schoofs), a creepy cabin in the woods, a cool little hipster apartment and a mother who’s deep into the spooky spirit stuff.

In fact, Mom (played by Wallace) and son have a discussion regarding whether they can still feel Ayla’s presence. Mom tells Elton that Ayla has no reason to return at this point, but Elton doesn’t want to believe that. Elton suggests to his mother that perhaps she can’t feel his sister “visiting” anymore because maybe Ayla wants only him to feel her.

We also meet Elton’s brother, James (D’Angelo Midili), who also doesn’t really get Elton’s 30-year obsession with their dead sister. James gives photos of young Ayla to Elton and wishes him well. Elton uses a scanner and an aging program on his computer so he can see what his sister would look like in present day. Spoiler? She looks a lot like the lovely Tristan Risk. Cue the spooky music.

Moving forward, we get a deeper look into Elton and we see that the guy is clearly troubled. After an experience he has in a spooky shed in the woods, Elton seems to find himself, or…something. And things just get stranger from here. Once Elton “finds” what was once lost and seems at peace finally, and who’s the strange, mute 30-year old woman he suddenly has traveling around with him?  Yep. It’s Ayla. Or…is it? Well, whatever she is, they wind up together at a motel, where we meet an eccentric motel clerk (Oberst Jr.), naturally.

Elton and Ayla have a good, albeit a bit incestuous, time in the motel room. Once they grab a bite at a local dive, they hit the road back to Elton’s swanky pad and enjoy another meal. Ayla has a few charming quirks when it comes to eating, and they’re cute enough to lighten the mood of the film when they happen. A not-so-charming quirk she has is that she’s a puker. But hey, we can’t all be perfect, right?

Anyway, Elton rushes to tell his girlfriend that he’s found Ayla and he wants her to come over and meet his dead-not-dead sister. Sure. Why not?  Elton comes home shortly after, only to find Ayla nude and passed out on the floor. He wakes her up and she pukes again. Those damn dead-not-dead siblings always make a mess! Elton does his brotherly duty and gives Ayla a shower and puts her to bed while he sneaks away for some enthusiastic sexy time with his girlfriend, because again, why not? However, even deep in the throes of passion, Ayla weighs heavily on his mind. What’s a boy to do? Why…pay a visit to his mom, of course!

So, the two of them go to Mom’s house, only to be welcomed by older brother James who isn’t buying into the idea that Ayla is really their long dead sister. James tries to tell their mom that Elton needs to go to a hospital for help, but all she agrees with is that he does look unhealthy. The brothers talk, things are revealed, and issues are kind of put to rest between them. After being fed, Mom bids the gang goodnight, and things start getting even more weird. Tensions rise between the brothers, sis jumps in the middle and things are squashed, but not for long. Eventually, Mom tells Elton that she doesn’t know who the young woman is, and that he needs to seek closure once and for all. Elton leaves with Ayla in tow in the dead of night, and we’re brought back to an event that we only saw a part of at the beginning of the film. As for what happens at the end of Ayla, well, you’ll just have to watch it for yourself.

I’ll be honest with you. I had to watch Ayla more than once. Not because I liked it so much, but because it’s just a bizarre slow-burn, which, if you’ve seen any of Elias’ other work, you know it’s how he rolls. Ayla isn’t your typical horror movie, but it is one to watch just because while it may not be heavy on the gore, it IS a rather dark and creepy ride. However, it’s kind of another “is it real or is it all in his head?” type of story, which kind of seems to be the thing to do lately. This story is original, but it’s not really engaging emotionally. I didn’t really feel any type of way about any of the characters, which is kind of disappointing, as I like to root for someone or wish them a terrible death. I didn’t do either while watching Ayla.

However, the acting is very well done, the score is well-suited for the overall atmosphere of the film, and the cinematography is gorgeous. If you’re looking for an unusual, thought provoking film, then give Ayla a try. 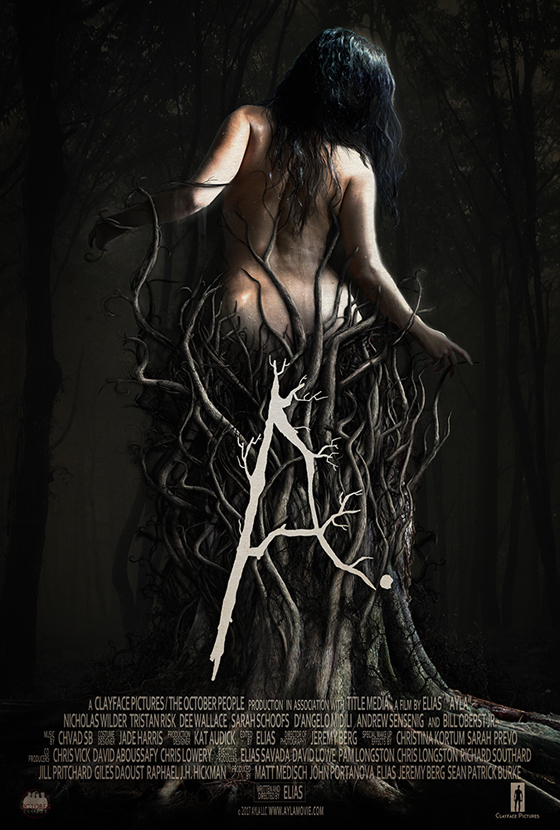