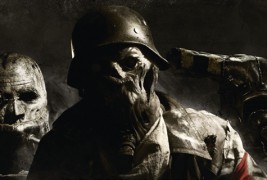 At the time, there were those who thought that horror couldn’t exist after the concentration camps. Compared to the carnage of the Second World War, Count Dracula and his “creatures of the night” felt like downright cartoonish caricatures of what real fear looks like. Films such as Edgar G. Ulmer’s Black Cat (1934) and Karl Freund’s Mad Love (1935) were suddenly denuded of fear and only their aesthetic charms were left to save them from the disposal heap of celluloid history.

After the war, an increasing realism pervaded the American cinema, and to a great extent, it’s still there. That said, a new cinematic contrivance hit the scene after the Nazis, the Italian fascists, and the Japanese militarists hit the ground for the long dirt nap – schlock. Long before John Landis’s simian-friendly satire, the word “schlock” denoted a type of entertainment that sought titillation and exploitation, even at the cost of hokey storylines and less-than-stellar production. For the longest time, low-budget horror films were almost schlock by default. Modern technology has helped to change this a little bit, but the stigma of schlock is still there.

The reason why this isn’t going away any time soon is twofold: 1) horror films aren’t accepted by “serious” film critics, and there’ll be a snowstorm in Texas before a legitimate horror film (not a quasi-thriller) gets nominated for one of those golden bald men, and; 2) the horror genre attracts writers and creators who are interested in the outlandish and the absurd, thus making it easier for such things as Frankenstein’s Army to exist.

Now before diving totally into Frankenstein’s Army, let us reflect upon a sub-genre of a sub-genre. In the world of film, books, and most importantly video games, there exists a very specific specialty, a sort of mash-up if you will. I am talking here about the collusion of Nazis and zombies. Sometimes “zombies” can be replaced by “demons” or some other non-human or abhuman entity. Either way, there is certainly a niche market for creations that attempt to further demonize the Third Reich. Examples of such behavior are F. Paul Wilson’s novel The Keep (1981), Dead Snow (2009), and the entire Castle Wolfenstein video game franchise. If one were to go further back in horror history, then one would stumble upon such gems as Richard E. Cunha’s She Demons (1958) and Ishirō Honda’s Frankenstein Conquers the World from 1965/66 (a film that bears an influence on Frankenstein’s Army). In both films, the Nazi appetite for vile experimentation cannot be sated, even after the war’s completion. Obviously, some of this exaggeration is based in the real atrocities of the Nazis, and even more is taken from the fantastical notions of Reichsführer-SS Heinrich Himmler, a man thoroughly obsessed with the occult.

It is from this brew that Frankenstein’s Army bubbles forth. Directed by Richard Raaphorst, written by Chris W. Mitchell (along with Raaphorst), and starring a “who’s that?” cast, Frankenstein’s Army is the epitome of a low-budget horror film. At first, this characterization rings false, for the film’s coloring, sound, and cinematography are on the positive side of the quality spectrum. That said, a discerning viewer will immediately begin to notice problems in the film. For starters, the film’s action is flat and its combat scenes are far from believable. Even the Soviet soldiers who tell the story are anachronisms (one soldier – the sniper Alexei [who is played by Mark Stevenson] – has the flowing blonde hair and the trimmed beard of an indie rock star). Adding to this problem is the fact that the film is clearly shot in a very tight area, with certain locations popping up again and again. Frankenstein’s Army was made with little to no money, and as a result, the film feels discombobulated throughout. 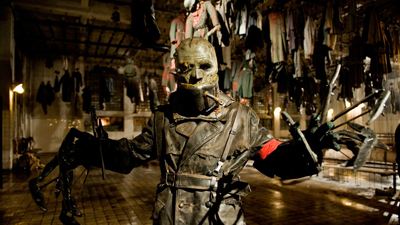 One of the reasons for this disjointed character is its narrative technique. Like other found footage horror films, Frankenstein’s Army relies upon a flash backward arc that forces the audience into a permanent state of accepting disbelief (after all, who keeps filming while they are being attacked by mechanically-altered zombies). Throughout the entirety of Frankenstein’s Army, the in-story camera never stops rolling, and there are only certain moments when things go black. This voyeuristic approach is deceptively smart, for it allows the audience a chance to realize that they are just as ghoulish as Dimitri (Alexander Mercury), the film’s constant soldier-auteur. Unfortunately, the stiff acting of the film and the script’s reliance upon stock characterizations makes audience identification extremely difficult, if not impossible. Added to this is the film’s inchoate plot (which deals with a recently discovered journal from the Doctor Frankenstein and a Nazi plot to salvage the war), which is barely allowed to produce anything tangible in just over an hour and twenty minutes.

A more mean-spirited critic would call Frankenstein’s Army an excuse to show-off the grotesque zombie-machine solider hybrids. The problem for this hypothetical critic is the fact that the creations in Frankenstein’s Army aren’t even that cool to begin with. For the most part, these hulking, whizzing monstrosities are either outright copies of the Über Soldats from Return to Castle Wolfenstein or of Karl Ruprecht Kroenen from Mike Mignola’s Hellboy series. I even laughed out loud at one creature which had a plane propeller for a face. Even then, my laugh had less to do with the film and more to do with a Jim Norton joke about the Big Bopper’s last moments (“Chantilly lace, propeller in my face”).

By the time that Frankenstein’s Army wraps up, you should get an underwhelming feeling of time wasted. Frankenstein’s Army contributes nothing to this sub-genre of a sub-genre, and even its more interesting moments are mostly lackluster. It’s sad to say, but it’s clear that the creative team behind this film desperately wanted to make a gory and gutsy flick for the fanboys, but ultimately they served up just another straight to DVD forget-me that won’t be rescuing horror from the gutter anytime soon.

Frankenstein’s Army is currently available on Video on Demand and Amazon Instant Video. It is scheduled to be released on DVD on September 10th from Dark Sky Films.