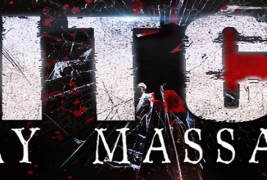 I recently had the opportunity to sit down with not one, but three awesome people involved in the film Ditch Day Massacre, an homage to ‘80s-era slasher films produced by Water Tree Media.  Ditch Day Massacre is a simple tale of revenge pitted against some clueless teenagers…or is it?  I can’t say much more without giving it all away, so I’m going to leave it to the pros this time – horror genre veteran Bill Oberst, Jr. and co-stars Katy Foley and Zach Silverman.

RavMon: Tell us a little bit about yourself!

Oberst:  I’m a good guy who plays bad guys. For those who are interested, my IMDb page has the scoop: http://www.imdb.com/name/nm2454994/ It’s a pleasure to be here on Ravenous Monster, by the way. I love your site.

RavMon: Hey, thanks!  I think it’s pretty great, myself.  So how did you get involved in Ditch Day Massacre?

Oberst: I had worked with director Joe Hendrick the year before. When Joe signed on to direct Ditch Day Massacre he thought of me for the antagonist role. I’m glad he did. I thought Daniel and Ryan Coughlin’s script was a smart and sly homage to the classic slasher flicks of the ‘80s, and Joe’s flair for unusual character touches made playing the emotionally wounded Vick even more appealing to me.

RavMon: I think I know just what you mean.  So let me just ask: what’s the deal with the apples?  Do they have a deeper significance, or was it just a fun running gag?

Oberst:  That is one of those character touches I mentioned. The apples have meaning to Vick; they had meaning to me. Each viewer can decide for themselves what that meaning is. The beauty of cinema as an art form is that it can ask questions and let the audience provide the answer. On a more shallow level, I really like apples—they are very good for you—so I was delighted to chomp down on them in between axe swings.

RavMon: Tease.  I know I won’t look at them quite the same after watching the movie.  Anyway, you’ve got quite an impressive filmography, working on TV, big pictures, small pictures, everything in-between.  Do you prefer working with small indie filmmakers or bigger studios?

Oberst: Each has its charms. If the passion is there, the experience is always amazing no matter the budget. If the passion’s not there, it doesn’t matter how many millions you throw at it—you’ll get a dead piece of art. The best sets are the ones where everyone really cares about each other and the work.

RavMon: Absolutely.  So, from your IMDB profile, it looks like you’ve been keeping very busy!  Are there any upcoming projects you’re particularly excited about or that you could share with us?

Oberst:  I did a dozen pictures last year and will do 10-12 this year. It is hard to keep up with what is coming out when. Besides Ditch Day Massacre, I suspect that the next releases will be Billy Pon’s Circus Of The Dead and Gregory Blair’s Deadly Revisions. There is a possibility of the character I played on CBS-TV’s Criminal Minds coming back in the new season (he is one of the few Unsubs who escaped capture by the BAU) and I just wrapped a film with Armand Assante that I’m excited about; Mark Savage’s 120/80. Also I will have a talking-dog Christmas comedy with Dean Cain and Richard Riehle coming out this November; Jesse Baget’s The Three Dogateers Save Christmas. And Trevor Juenger’s controversial arthouse-horror feature Coyote has been picked up by Wild Eye Releasing for fall release. I love what I do and I’m so grateful to God for allowing me to do it for a living. I’m an entertainer at heart. I just want to make people smile even if it takes a few murders to do it!

RavMon: It’s making me tired just thinking about all of that.  Thanks for your time, Bill!  Now, over to Katy and Zach….

RavMon: Tell us a little about yourself!

Foley: My name is Katy. Like Katy Perry unfortunately. I tease. I’m from the southside of Chicago. I grew up being a huge fan of Michael Jordan bu—too short to be like Mike—I began working in comedy at Second City. I have a wiener dog named Oscar and I love deep dish pizza. That is all.

Silverman: Well as you may already know I am Zach Silverman.  I am a Capricorn so naturally I am stubborn but very grounded, my favorite color is blue and in my free time I like to read and watch Japanese cartoons…Ha, no! I know what you want to REALLY know about me: I was born and raised in New Jersey.  Always enjoyed the arts, things like music and art classes.  It wasn’t until high school I discovered acting.  Lucky me I had New York City in my back yard so I spent my weekends going to acting classes.  At 21 I moved to the great city of Los Angeles where I have continued to pursue an acting career.  Over the last five years I have had a lot of success in my eyes, a few cool commercials, some really great short films, a web series and of course Ditch Day Massacre, which happens to be my first feature-length film playing a lead—mom was very proud about that one.

RavMon: How did you get into acting?

Foley: Named after Katharine Hepburn my Mom claims I was doomed from the womb. I shot a commercial for my uncle’s dog kennel when I was 5 and caught the bug.

RavMon: It’s like it was meant to be!  What was your favorite part about filming Ditch Day Massacre?

Foley: Listening to R. Kelly’s Trapped in the Closet in between set ups. Well, that, and working with Bill Oberst Jr. was incredible.

Silverman: Working alongside Oberst was probably the best part of filming.  Being a seasoned actor, he made a lot of filming seem like a breeze.  He was very knowledgeable in helping both on screen with his fellow actors and off screen with the crew.  I’d say he is a pretty big asset to have on set.  Besides all of that he is just the nicest man you could ever meet—kind of funny how on screen he could scare the living day lights out of you.  I really enjoyed working with him though.  He was always so professional and respectful towards everyone. I really hope we do get to work together again soon in the future.

RavMon:  I bet!  Did anything memorable or crazy happen on-set?

Foley: I went for a run during a lunch break to escape the amazing lure of craft services. The executive producer thought I went for a run to stay in character, but I actually was just trying not to get fat.

Silverman: The best part of filming was the bonding that happened on and off set.  We shot on location in Long Beach and then at a camp site in Temecula.  In Long Beach, the main cast of kids all bunked up together in the producer—Megan Waters’ house.  We would wake up together, rehearse, eat, go to set, film and make our way back at the end of the day.  There was some down time here and there with different actors getting to be on set or back at the house, so naturally we all got to enjoy each other’s company.  When we went to Temecula we all got to camp out! Bon fires and s’mores—can you really ask for anything more while filming a horror film?  I say no. I made a lot of great connections and friends on the set of this film and can say it was an honor to work with such a talented group of actors and crew members. I’m just really excited to see the audience’s reactions to the film we all made.

RavMon: I can’t imagine anybody’s ever had more fun filming a movie.  I’m pretty jealous, and you guys are hilarious.  Thanks again for your time!

And if you want to know more about this crowd of characters or Ditch Day Massacre, check its website here: http://thefilmditch.com/. 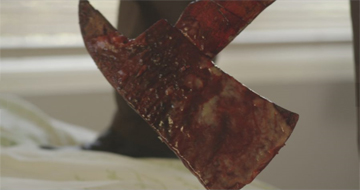