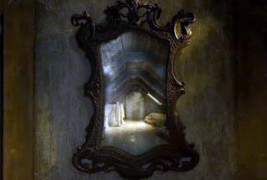 “It was well said of a certain German book that ‘er lasst sich nicht lesen’ – it does not permit itself to be read.”

-Edgar Alan Poe, “The Man of the Crowd”

Oculus, Mike Flanagan’s cerebral thriller hitting theaters April 11, is a film that does not want to be read or easily understood. It’s Soviet-esque: a riddle, a conundrum, and all that rot. While some horror film tropes exist, Oculus mostly eschews the usual routine. There’s no happy home or easy-going family to enjoy being with, plus there’s no happy ending. No demon or extra-terrestrial bogeyman from Planet X gets vanquished, and quite frankly, the “good guys” spend most of the film suffering and only receive further anguish for their pain.

Oculus is primarily about two siblings: Tim Russell (played by the Aussie Brenton Thwaites) and Kaylie (played by the Scottish Doctor Who alumnus Karen Gillan) and their battle against an antique mirror known as the Lasser Glass. The mirror, with its black, twisted frame, just looks evil. In fact, the mirror, of which little is known save for the fact that its previous owners have all had a bit of the old bad luck, might just be evil incarnate—a shiny, smooth surface without redemption, human emotions, or a winking nod towards anti-heroism. The mirror is in fact a deep void, and it is this inexplicable negation that makes it a rather terrifying antagonist.

From the perspectives of Tim and Kaylie, the mirror’s greatest crime was its assault on their family. When their father, the sullen businessman Alan Russell (played by Rory Cochrane), brings the mirror into the home, everything immediately goes to pot. Hung in his private study, the mirror begins to eat away at Alan’s psyche; all the while his somewhat estranged wife Marie (played by the ever-busy Katee Sackhoff) becomes increasingly convinced that he is having an affair. Marie’s apprehension only increases as Alan’s mood dips and the mirror begins preying on her insecurities (which seem to mostly pertain to her negative self-image).

Making matters worse, Alan and Marie’s children—the younger versions of Tim and Kaylie (who are played by Garrett Ryan and Annalise Basso respectively)—keep seeing a strange and dark-haired woman in Alan’s office. They try to tell their parents, and some of it gets through, but as is the case in much of Oculus, real information and the truth are opaque. In fact, if you’re the type of person who demands linearity and coherence in your movies, then avoid Oculus at all costs. 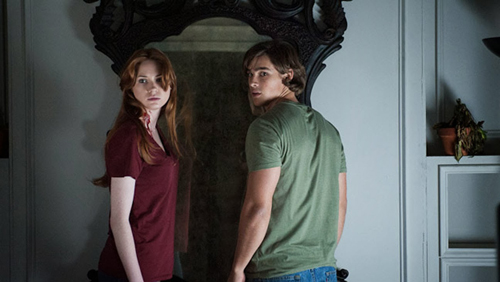 Surprisingly, for a film that was partially financed and produced by the WWE (yes, the same WWE where men in tights clobber each other for gold in a decidedly non-LOtR way), Oculus is a heady mind-trip that never really allows its audience to get comfortable. Most of this comes from the film’s pacing (it starts slow, then runs straight forward into suspense without a hint of humor or other likeminded tension-breakers) and manipulation of time. Like the self-consuming Ouroboros, Oculus keeps winding back to the beginning, or possibly the end. The death of Alan and Marie repeats itself in the same time stream as the adult Tim and Kaylie’s attempts to destroy the mirror. After Tim’s release from a mental hospital (his punishment for the earlier death of his father), Kaylie, a no-nonsense redhead, tries to convince him to return to their old house for a hi-tech showdown with the mirror. From here, Tim and Kaylie get “unstuck in time” and the mirror begins to clash their present with their past. This is how Oculus straddles the rift between simple ghost story and a somewhat Joycean (think Episode 15 in Ulysses) tale of epistemological doubt.

So far, most reviewers have either labeled Oculus a “dangerously cracked creep flick” (New York Daily News) or a “satisfyingly scary ghost story” (Washington Post). The truth is that Oculus isn’t really a ghost story or a creepy film. It is, in fact, a symbol-heavy suspense film rich in subtext and deeper meaning. For instance, despite the surface-level trappings of a haunted house and a macabre, cursed object, Oculus gets most of its scares from the scattered memories of its protagonists. On top of that, despite the many mirror-eyed monstrosities that represent the glass’s past victims, nothing in the film is as scary as the Russell family’s deterioration or the disturbing questions about reality that arise. On top of that, unlike the usual film baddie which can be dispatched with fire, bullets, or a stake to the heart, the Lasser Glass’s all-consuming need for self-preservation renders it essentially indestructible. The only person who manages to damage the mirror at all in the film is Alan, whose sacrificial suicide causes a thin crack on one of the mirror’s bottom edges.

If this is what it takes to even graze the mirror, then what would it take to break it forever? This question is not raised in the film, and in fact Oculus does this frequently: the film raises big questions and then refuses to answer them. More maddening still, Oculus intentionally obfuscates any solid conclusion or rational reading.

While most of the players in Oculus perform their roles with aplomb or occasional moments of brilliance (Sackhoff is especially wonderful), Gillan stands out for all the wrong reasons. Gillan plays Kaylie with a boorish seriousness, and as a result the older version of Kaylie is guilty of uttering some truly cringe-worthy action movie clichés. Maybe it had something to do with Gillan’s attempts at a basic American accent, but whatever the cause Gillan spends the entirety of Oculus as a distant and stiff caricature—the one supposedly tough eye in a land of confusion.

For a film that received little hype and stars only actors known to niche markets, Oculus is a relatively brave film without much in the way of today’s standard CGI or glamorized bloodletting. The Newton Brothers soundtrack is equally unusual, for its simple, but pulsating rhythms are closer in spirit to John Carpenter’s work during the 1980s than anything from the last ten years.

All in all, Oculus is a surprise winner with a plot and construction worthy of intellectual discussion. And as one of the weirder mainstream horror films in recent memory, Oculus should be assigned viewing for any naysayers who think that the genre is either dead or living in an exceptionally very dull period. Oculus isn’t dull, and while it may lack in memorable scares, it works as a disorienting comment on illusions, false memories, and the savageness of time. 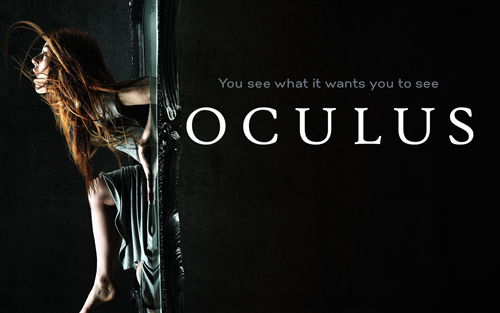