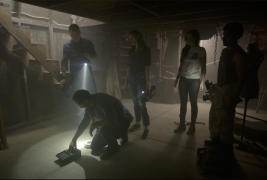 You’ve no doubt seen those supernatural reality shows dotting your channel guide. Most are low-budget affairs that promise much and deliver little.

The same could be said of Ghost Seekers, whose crew is having great difficulty scaring up paranormal entities. As lead investigator Steve (Ryan Merriman) puts it, “Hard evidence is exactly that — hard to find.” And as a consequence, so are ratings.

Laughs are a bit easier to come by. Case in point: Steve is using an EVP device (electronic voice phenomena) when he thinks he hears something, only to be told it’s his stomach growling. Now you see why the show is in danger of not being renewed.

Thus, we have the backdrop for Portal, offered up by HorrorHound Films, a relatively new production company that cut its teeth as an online magazine and purveyor of podcasts. Dean Alioto directed and co-wrote the flick with Peter Dukes. More on those two later.

Returning to the plot, we see that Steve has surrounded himself with a crew of misfits and oddballs. He’s mostly sympatico with producer and love interest Cris (Jamie Tisdale), who may be the only other true believer. Raz and Jen (Reinaldo Zavarce and Najarra Townsend) man the cameras but are mostly just along for the ride. Mason (Myk Watford) is the resident comedian and paranormal gizmo wizard. He also has a passion for gospel music that is something of a recurring theme.

Despite his crew begging to add fake scares to the show in an effort to pump up viewership, Steve is resistant. He’s determined to find real ghosts. To that end, he and Cris agree to pay a rival ghost hunting team for better haunted house leads. Through a bit of computer skullduggery, they come upon a house in which a father brutally murdered his wife and one of two daughters before meeting his own nasty demise. The Dalva family tragedy, Steve hopes, may finally yield the spirits he seeks.

Enroute to the house, we’re treated to a jolt when they slam on the brakes to avoid hitting a dog. Who pops up at the passenger side window but an American Indian, cleverly sporting a red baseball cap with white lettering that reads, “Make America Native Again.” Ha!

After the prerequisite “don’t go there” warning, our intrepid ghost hunters arrive at Tragedy Central. But despite finding the remnants of shotgun blasts against a cellar wall, the initial efforts at the Dalva house yield nothing but smart remarks and disappointment.

Steve, in desperation, is ready to give in to his crew’s “fake it” advice when they take a shovel to dirt near what they think is a strangely marked headstone. They discover a box with instructions for a ritual, evidently written in Native American language. While nothing initially comes of it, all hell is about to break loose, beginning with the disappearance of cameraman Raz.

To go into much detail beyond this point would spoil a few nice surprises. But one I will share is the welcome addition of surviving Dalva daughter Fiona, wonderfully played by none other than Heather Langenkamp, who as you’ll recall had a few tussles with Freddy Kreuger a few decades back. She and our old Indian friend (Gregory Zaragoza) shed light on what’s really at play here, which is something more in keeping with the title of the film.

Alioto handles the material here with a deft touch, settling for the less-is-more school of direction. There are few instances of special effects, no doubt a nod to a budget of beans. The ones that do appear are quite cheesy. So, what you get instead are mostly unseen forces enhanced by dim lights, spooky music, screams and a cast that seems to know how to milk the most out of a fright night.

Without question, Portal succeeds — and it IS a modest success — on the strength of the writing. Alioto and Dukes have produced a script imbued with snappy dialogue, executed nicely by the players. It’s funny without being campy and suspenseful without being overly dramatic. They do rush the ending, but on the whole it’s a film with a nice pace that keeps your attention from start to finish.

Portal isn’t going to make you forget the horror classics, but it’s a decent diversion for those with 75 minutes to spare. And if nothing else, you’ll come away impressed with Corey Allen Jackson’s musical score. It’s at once creepy and comical, kind of like the film … only better. 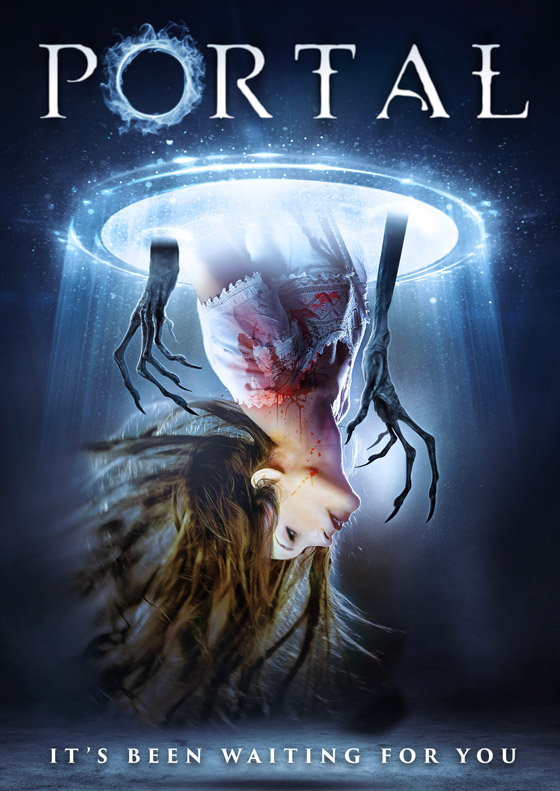