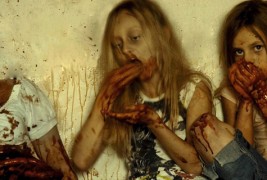 When I was asked to review Railway Children, I was perhaps unnecessarily enthusiastic about the task.  The plot synopsis hooked me right away: A movie that combines elements of Lord of the Flies with an apocalypse horror?  I can’t think of anything better.  I eagerly watched, expecting something dark, tragic and full of uncomfortable questions.  And Railway Children delivers that and more.

The story follows two children, teenaged Evie and her younger sister Fran, who have been orphaned by a mysterious virus that has wiped out the adult population.  Together, they cross the countryside and search for food and shelter where they can find it, never daring to linger too long.

Along the way, they run into several other survivors who have banded together in a feeble attempt at self-preservation, but it’s obvious that none of these children are truly equipped for that task.

Evie and Fran struggle to retain some sense of normalcy by reading The Railway Children, a children’s classic their mother had once read to them.  Even this tiny sliver of nostalgia hasn’t gone unscathed, however, as the book is tied to memories of their mother’s own descent into madness and death.

And there we discover the first, and deepest, horror of Railway Children.  The adults in this alternate future don’t simply die; they succumb swiftly and brutally to a virus that manifests as insanity and violence.  Through snippets of back story, we see the way the children each had to suffer the deaths of their parents – stories which are all simultaneously similar yet deeply personal.  It’s in these flashbacks that the film truly shines as we come to understand just how horrific their situation is and what psychological baggage they’ve been forced to carry.

I had the opportunity to interview director Jason Figgis about the project.  My questions – and his answers – are below.

RavMon:  First, could you introduce yourself?

Jason:  Hi. My name is Jason Figgis. I am a writer/producer/director from Ireland concentrating, in the main, on genre projects.

RavMon:  How did the idea for Railway Children develop?

Jason:  The idea came from my love of Edith Nesbit’s classic novel, The Railway Children (1905). For quite some time I have been trying to figure out a way of embroidering this story, with some of its eloquent language into a modern tale that had parallels with the children from her novel but implanted in a completely different setting. I found this in the sub-genre of post-apocalyptic stories which I find have quite a potential to be developed in many different directions.

RavMon: Were there any other stories or films that heavily influenced your story?

Jason:  I am a huge admirer of Nicolas Roeg’s films and in particular his atmospheric mood-piece Walkabout – an interesting coincidence being that Jenny Agutter starred in both this 1969 production and Lionel Jeffries’ 1970 production of The Railway Children (in fact she was so tanned from returning from Australia and the Walkabout shoot, that Lionel Jeffries’ make-up team had some job in paling her down for a tale set mainly in the North of England) – the disturbing but highly lyrical tale of two children, a sister and brother trying to make their way across a dangerous outback after the suicide of their father while on a picnic, has been a story that has stayed with me since I first viewed it as a child in Dublin, and which has retained its full powers to this day. This film was a major influence when I began writing the screenplay for Railway Children.

RavMon:  Many of the post-apocalypse stories on the market seem to focus on cities and urban life. What guided your decision to place your story in a more rural locale?

Jason:  Referring again to Roeg’s Walkabout and its rural locations; this was one of the main reasons for the choices I made with Railway Children in terms of locale. But, I also find there to be not only a lonely quality to aspects of the Irish rural landscape that lends itself to atmospheric photography, but also an optimistic quality; the possibility of better things over the horizon or around the next bend.

RavMon:  Obviously, you had to work with a lot of young actors for this film. What was your experience with that? Were they easier or harder to work with than older actors, in your opinion?

Jason:  I worked with children from a performing arts school in Dublin for this film for 12 months prior to going on set with them. I put certain students together to develop bonds based around their characters in the story and found this to be very beneficial. In particular Catherine Wrigglesworth (originally from Yorkshire) who portrays ‘Evie’ and Emily Forster who portrays her little sister ‘Fran’ were a challenge to develop that sisterly bond because, as a young girl, Emily has boundless energy that required serious reigning in. I found that Catherine’s natural protectiveness and qualities of an older sister to two younger brothers and a sister, was invaluable in developing that believable relationship between her and Emily and I hope that comes across on screen (continued after the pic). 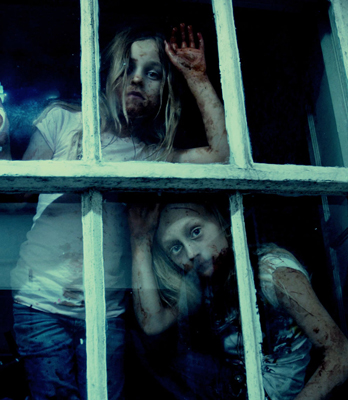 They would sit in class together, Emily leaning against Catherine with Catherine’s arm draped about Emily’s shoulder. It was the only time we could keep Emily quiet (ha-ha). All of the adult actors I had worked with before so I pretty much knew where they could potentially go with a character but it was still a lot of fun finding out where the borders of credibility would be; what would be too much and what would be enough. With children, the borders are always a little more unclear. I was constantly questioning how violent or disturbing the film could be and what level of threat would be acceptable. Children being children, they lapped it up – the more threat the better as far as they were concerned. Which of course made the atmosphere on set much more enjoyable. We also had a very good summer to shoot the picture so when the kids were not needed on set, they were sunbathing in the fields around the location.

RavMon:  What was the biggest challenged you faced when making the film?

Jason:  The biggest challenge had to be in finding believable locations for the picture. I wanted to make sure that there was a consistent look and feel to the film; without consistency, the viewer would be pulled out of the story. We were lucky in that we found a number of abandoned houses and the main location — the kids’ commune, was offered to us by a religious order of nuns who had moved to a modern building across the road. They visited us on location and were very amenable.

RavMon: How has the critical reception been for Railway Children? What are some of the things people are saying about it?

Jason:  We have been very fortunate that the film has captured the imagination of reviewers, especially in the UK and the US. I am particularly pleased that we have been receiving quite a great deal of positive word from writers on the subject of horror and the paranormal whom I really admire. We were included in The Conduit Speaks’ Top 20 – Darkest Arts of 2012; which was very gratifying and have had the film described by one reviewer as, ”A Post-apocalyptic punch to the gut,” by another as ”unexpectedly fresh for a modern horror” and by another as ”gripping and emotional with outstanding performances.”

RavMon:  I’d definitely agree with those.  So, shifting topics a little here, do you have any more projects in the works? What can we look out for next?

Jason:  We are currently putting the finishing touches on shoots for our new horror feature The Ecstasy of Isabel Mann, which is a very violent teen vampire film that looks at the troubled life of teenager Isabel Mann (Ellen Mullen – ‘Cass’ from Railway Children).

RavMon:  That sounds excellent.  I’ll keep an eye out for it.  Now, before we wrap up, what’s one question you wish someone would ask you about your movie?

Jason:  You asked it; ”Were there any other stories or films that heavily influenced your story?” It was great to talk about Walkabout! Thank you.

RavMon:  Well, that worked out fortuitously then!  Last question: where can we pick up a copy of Railway Children?

Jason:  The film is currently with a sales distribution company in the US and so we are hoping it will be available very soon. Thank you very much for taking the time to ask me these great questions.

Thanks for your responses, Jason.  It was a pleasure taking a look at Railway Children.  As for the readers, I hope you enjoyed this peek at a very interesting take on the post-apocalypse tale.  If you’re intrigued, you can learn more about the movie – including details of its release – at its website.