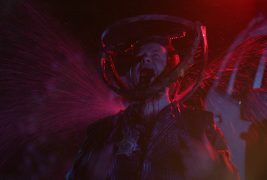 I guess I should start this off by saying that I’ve never been a fan of Christmas, but I do enjoy a   Christmas horror film, my favorite being 1984’s Silent Night, Deadly Night. So, when Red Christmas was brought to my attention, it automatically piqued my curiosity. Not only is it a holiday slasher flick, but it also features the lovely Dee Wallace, who also serves as one of this film’s producers. So, is Craig Anderson’s Red Christmas the next ho-ho-holiday horror classic, or is it just ho-ho-horrible? Read on and find out.

Red Christmas is the holiday tale of a mother fighting to protect her highly dysfunctional family from an odd, black-robed figure who has serious mommy issues. And, once he’s essentially welcomed into the home for the holidays, what could possibly go wrong? After all, the soft-spoken, homicidal maniac just wants to read a heartfelt letter to his long-lost mother for Christmas. C’mon, it’s lovely weather for a “slay”-ride together, yeah? Now, gather ‘round and let me tell you what’s naughty and what’s nice about Red Christmas.

As I said earlier, the “nice” list about Red Christmas begins first and foremost with the casting of Dee Wallace. She’s just a pleasure to watch in just about anything. In Red Christmas, she plays a doting, loving mother/mother-in-law of a bunch of colorful characters. There’s a pot-smoking, booze-shooting pregnant daughter, and a pervy, voyeuristic man of the cloth, just to name a couple. As is always the case, at least in the movie world, there are all kinds of tense relations amongst the family, especially during the holidays. Secrets and resentment play a big part in the overall story, but there’s enough dark humor thrown in to lighten the mood. Of course, there must be a ton of bad decisions made by everyone in the film, so it’s up to the badass mama to save the day.

As far as the gore goes, Red Christmas is an Aussie horror film, so by now, it’s pretty much a given that the blood and guts are typically over the top. There are some pretty decent original kills in this film and they’re quite enjoyable. Unfortunately, some of the effects aren’t the greatest, but still, I’d rather see bad practical effects over a ton of crappy CGI any day. So, with that being said, it’s time to get naughty.

Red Christmas might have been more enjoyable had it not been set during the time of year that it is. I don’t know, aside from the characters stating that it’s Christmas, there’s really not that much of a holiday feel to it. There are also a few heavy political statements made within the story, which I feel kind of take away some of the fun of the movie. Another complaint is that the lighting in some of the scenes is so dark that it’s hard to make out what’s going on.  My last bitch and moan is that at times, it’s hard to understand what is being said. The delivery of the dialog is up and down, and even when the killer speaks, it is difficult to understand what he’s saying more times than not.

In wrapping this up, I found this film to be watchable, but it’s not a movie that’ll be in heavy rotation with me once the holiday season begins. For a slasher movie, it hits all the usual marks, but the overall story is hit or miss. If you’re in the mood for some pre-holiday blood splatter, be sure to catch Red Christmas when it opens in theaters on August 25th! 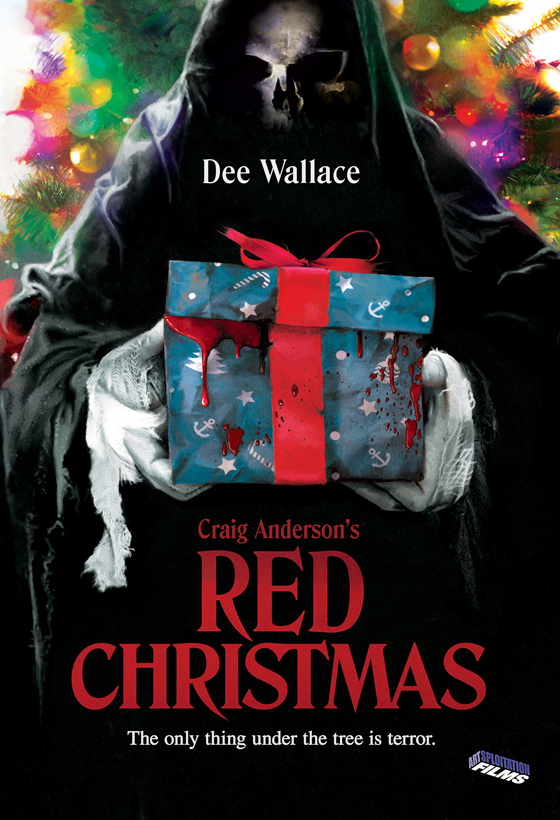