There’s something strange happening in Room 203. A grisly past has kept tenants away for fifty years. A strange odor fills the apartment. A hole in the wall resists any attempt at repair. Room 203 has remained empty for decades. Until now.

When Kim (Francesca Xuereb) and her life-long friend Izzy (Viktoria Vinyarska) move into the empty apartment, the only concerns they have are breaking away from their past and looking forward to their future. The landlord, Ronan (Scott Gremillion), is a bit of a creep and the antique stained-glass window in the master bedroom is off-putting, but aside from that, the room is perfect. Their optimism quickly sours as the evil within Room 203 returns to claim another set of victims.

Directed by Ben Jagger, Room 203 is a decent lazy-afternoon movie. Engaging enough to play on a whim, but nothing that will really knock your socks off. While it doesn’t bring anything new to the haunted house genre (or haunted room, as the case may be), it manages to be mostly entertaining.

The mystery surrounding Room 203 is slowly unveiled through the journalistic investigation of Kim, along with help from a fellow classmate, Ian (Eric Wiegand). Their investigation is intertwined with a minor romantic subplot as the two grow closer to one another. All the while, Kim becomes concerned about Izzy’s increasingly bizarre behavior. As the relationship between Kim and Ian grows, the relationship between Kim and Izzy wilts.

The chemistry between Kim and Ian comes across as genuine and is actually rather cute. However, while their scenes do work well individually, they tend to get in the way of the core of the actual story. At nearly two hours long, Room 203 feels bloated, with a little too much character development for its own good. Based on a novel by Nanami Kamon, Room 203 very much feels like an adaptation. While a novel can take time to explore character-oriented diversions, cinematic story-telling can quickly become bogged down when doing the same. Such indulgences become burdensome if the B-story is not top notch. Unfortunately, the romantic interactions between Kim and Ian just don’t carry enough weight to warrant the time spent with them.

When we do get back to the meat of the story, major developments occur at a rapid pace, escalating to their conclusion before the audience can even process what exactly has unfolded. Too much time is spent on extraneous sequences and not enough time is spent on explaining what’s happening in Room 203.

Why can’t the hole be fixed? Why does the room stink sometimes? What’s the deal with the bird? How is the stained-glass window important?

Once the mystery was explained, and the evil spirit was vanquished, I found myself more confused than informed about the nature of the entity. The little details tying up all the loose ends seem to have been left out of the script in favor of keeping the running time under two hours. And on the rare occasions  those details are mentioned, they’re glossed over so quickly that they are immediately forgotten.

Room 203 manages to simultaneously include too much story and not enough. It’s never outright bad, but more often than not, it’s never quite as good as it otherwise could be. When it does stick to its horror elements, it is a fun watch. With a satisfying mix of unsettling atmosphere and the occasional gory special effects, the film knows how to be horror when it wants to be. In those moments, it truly shines. With 30 minutes or so trimmed from the length, Room 203 could have much more impact.

The performers all around put in good work. From the main cast, all the way down to the small parts which sometimes last for only a scene or two. Everyone on screen comes across as believable and interesting. Viktoria Vinyarska’s performance is the most memorable as Izzy devolves from a fun-loving, if troubled, party-girl into an unpredictable nightmare of a roommate.

The role of Kim is less spectacular, but vitally important. The main character of the story is often burdened with the thankless task of maintaining the rules of reality while the rest of the world spirals into insanity. Due to this story necessity, Francesca Xuereb is given fewer opportunities to flex her acting muscles. She does a fine job of keeping the story grounded, and when those opportunities do appear she proves that she is equally capable of letting loose.

Room 203 may not be anything to go out of your way to see, but for what it is, it’s worth giving it a watch if it comes across your path. If you’re looking for a comfort-watch, something to pass the time on those lazy, rainy afternoons when you don’t have anything better to do, Room 203 is the perfect fit. 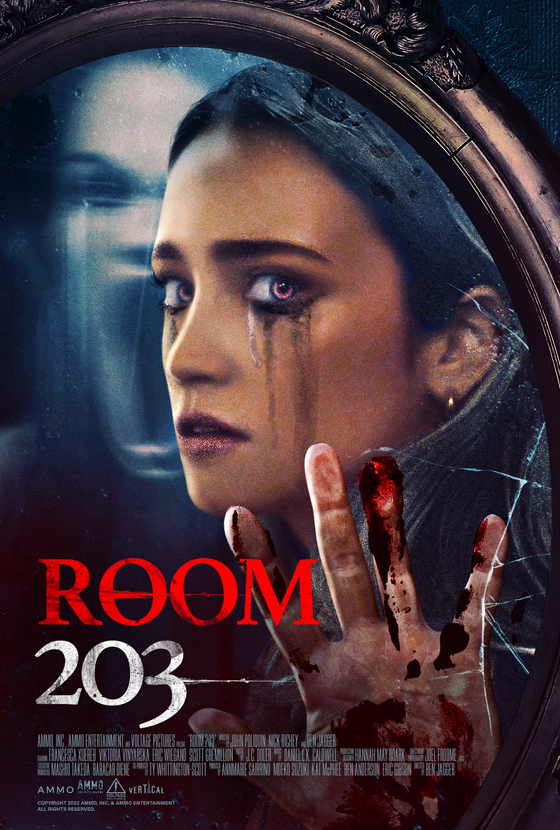