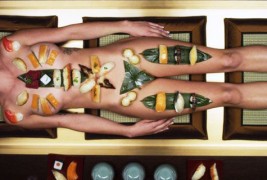 After a heist gone awry, Fish (Noah Hathaway) is nabbed and does six years keeping his mouth shut.  On the evening of his release he finds a limo outside the prison, waiting to bring him to his partners and a vicious night of violence in an attempt to determine where the diamonds they’d stolen ended up.

Kern Saxton’s Sushi Girl is an excellent little low budget thriller that succeeds far more than it fails.  Its greatest accomplishment is keeping an incredible level of tension throughout the entire film, especially with a cast of truly unlikable and despicable characters.  Saxton’s direction paints a gritty world with small subtle flashes that drag us in deep.

Fish’s limo brings him to an old derelict building that Duke has refurbished for the evening’s event.  Duke is played by horror royalty Tony Todd (also a producer) who radiates smooth menace with each syllable he mutters.

Other stand-out players are Mark Hamil (who almost turned down the role due to its sadistic and graphic violence) and Andy Mackenzie.  They play Crow and Max respectively.  Hamil plays his role with an effeminate sexual ambiguity and pretentious stride, and it’s amazing.  Max is just plain dangerous lashing out with unpredictable and escalating violence.

These older, weathered players are contrasted by the young Sushi Girl (Cortney Palm), who lies naked and covered in Sushi at the center of the table around which the gangsters sit, giving an effective and subtle performance as she tries not to react to the violence that breaks out between the reunited gang.  As someone who writes horror novels and reviews horror films and books, I was stunned by the creative violence on display.

The screenplay is intricate and well-developed creating a clear purpose through the seemingly random chaos.  As well thought out as the chain of events is some of it feels needlessly complicated, with a few moments of simple convenience.  The occasionally weak dialogue however benefits from an ensemble (including Sonny Chiba, Michael Biehn and Danny Trejo) of great genre character actors playing off of each other expertly.  Sushi Girl is a very good genre offering that nears greatness, but doesn’t quite reach it.  However, this movie is well worth your time despite its few shortcomings. 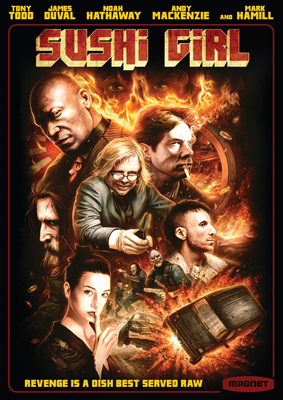