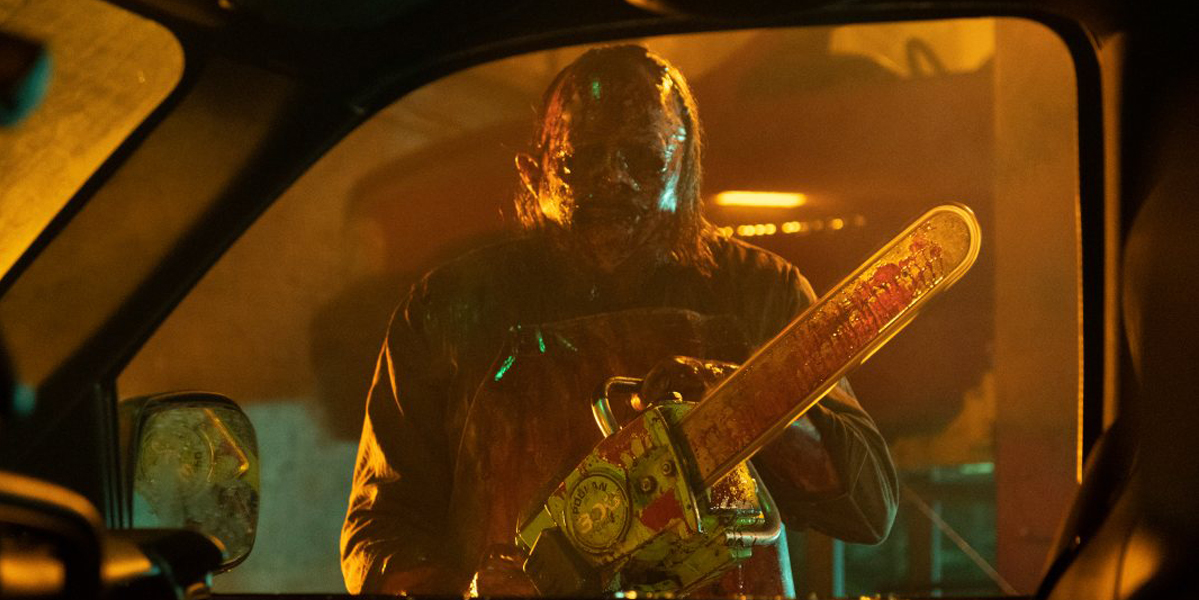 I really do try to avoid proclaiming things “objectively true,” but it happens sometimes. I’m opinionated. Go figure. So, at the risk of pissing off some segment of Toxic Fandom du Jour, I’m going to go ahead and state that The Texas Chain Saw Massacre (1974) is one of the best and most important horror films ever made. That, my friends, is objectively true.

One could be forgiven for mistakenly assuming that after nearly 50 years, the TCM canon would include a few highlights—an additional movie or two that are worthy of the immense legacy of the Leatherface mythos birthed by the original lightning-in-a-bottle masterpiece. Unfortunately, though, this franchise has been arguably the most bungled of all of horror’s major players.

Aside from a now well-regarded first sequel by original director Tobe Hooper in 1986—a movie that gleefully threw a wrench into the proceedings with its overtly comedic approach and over-the-top spectacle—the TCM franchise is full of underfunded, half-baked non sequiturs and outright flops. The closest thing to real success was the 2003 remake—a glossy, WWE-inspired Michael Bay production that had more impact on the movie business at large as the progenitor of the remake boom than it had on the franchise it was trying to reinvent.

It follows, then, that one could also be forgiven for not getting too excited about the latest entry into this messy mélange, particularly an entry that saw its original directors fired over “creative differences” after filming had already commenced, and then got unceremoniously dumped onto Netflix upon its completion.

The latest ill-advised road trip into the heart of the Lone Star State—director David Blue Garcia’s Texas Chainsaw Massacre (2022), follows a group of young entrepreneurs who’ve decided to purchase a locale called Harlow—an entire ghost town in the ruralest of rural Texas—in which they envision a thriving community centered around a business hub populated by their own innovative startups. Melody (Sarah Yarkin) and Dante (Jacob Latimore), along with Melody’s sister Lila (Elsie Fisher) and Dante’s girlfriend Ruth (Nell Hudson), arrive in time to scope out the place before a party bus carrying potential investors soon follows.

While attempting to remove a tattered confederate flag from the side of a dilapidated orphanage, the group discovers the building’s still occupied by an elderly woman named Ginny (Alice Krige) and her “boy” (or extremely large and shadowy grown-ass man, as it were). Ginny swears up and down that she has the deed to the property proving her rightful ownership. As she and Dante begin to argue, Ginny suffers a heart attack. She and her “boy” are loaded into the back of an ambulance and driven off…with Ruth riding shotgun, for some reason. 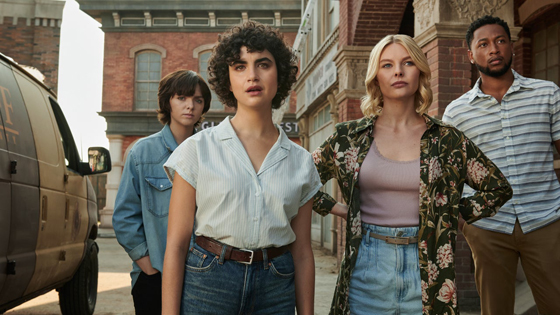 As horror movie luck would have it, Ginny dies enroute to the hospital which causes her “boy” to freak out.  And by “freak out,” I mean cause the ambulance to crash while butchering everyone onboard and then cutting off a fresh face to wear. And just like that, Leatherface is back. And by “that,” I mean exactly how Michael Myers was brought out of retirement via an opportunistic vehicle maelstrom in Halloween (2018). More on that movie later.

The rest of Texas Chainsaw Massacre plays out in entirely predictable, cliché-laden terms. Leatherface heads back to Harlow where he dispatches just about everyone. In the meantime, word gets out to Sally Hardesty (Olwen Fouéré), the original movie’s lone survivor, now a grizzled Texas ranger/late-model Laurie Strode doppelganger (speaking of Halloween). Sally, like Laurie was four years ago, is on a mission to put an end to the boogieman after decades of mental anguish. But unlike Laurie, Sally’s inclusion here is seemingly arbitrary, extremely brief, and likely the result of a cynical promotional ploy.

After an abundance of bloody but by-the-numbers carnage, some of our heroes finally confront ol’ Leatherface, and as my favorite one-sheet asks, “Who will survive and what will be left of them?”

This movie is a mess. That’s not to say it’s ALL bad. But mostly.

In broad terms, Texas Chainsaw Massacre (2022) checks all the boxes of an ultra-generic modern slasher flick. It’s lit like an Aerosmith video (see: 1990s). Though there are some admittedly excellent kills, there’s way too much CGI gore. There’s a hollow flinch of an attempt to graft on a bit of sociopolitical zeitgeist, or at least the appearance of it, and there’s only a cursory emphasis on character and story. The result is a movie that will evoke a few smiles from Horror Fans over the course of its one-hour and twenty-one-minute runtime, and little else.

In terms of this movie’s place as the self-proclaimed direct sequel to The Texas Chain Saw Massacre? To that end, it misses badly. It doesn’t ever once feel like it resides in the same universe as the original. The few explicit references to the 1974 film are as superfluous and uncompelling as any found in the rest of the franchise.

Leatherface doesn’t ring true, either. That’s no fault of this movie’s man behind the mask, Mark Burnham, who was a great pick for the part, misused though he was. But the original Leatherface was one member of a family of cannibal killers and a much more complex character—partially shaped by that family dynamic—than his later slasher peers would be. He was portrayed as frightened and vulnerable one moment and barbarically homicidal the next, his various masks representing a range of personalities. There were clear implications of severe mental illness and who knows what else, all giving way to utter, manic lunacy and derangement that together created an unmistakable, unforgettable, and apparently unmatchable tone. 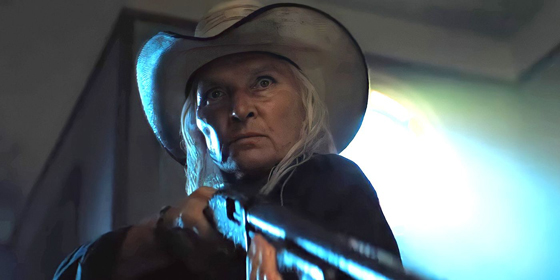 That’s one of the things that sets the TCM universe apart from the others. The potential horrifying reality of it. Here, though, Leatherface could be any generic slasher. And to top it all off, his new look is tragically reminiscent of Admiral Akbar from Star Wars, which didn’t exactly have me repeating, “It’s only a movie…it’s only a movie….” Not in a good way, at least.

And it’s not just the apparent indifference to the prior characterization of Leatherface that’s bothersome. It’s that this Texas Chainsaw Massacre goes a step further and portrays him no differently than Jason Voorhees or Michael Myers. Like them, Leatherface is now a supernatural killing machine with super strength and apparent invincibility. He might as well be wearing a stainless-steel space-hockey mask.

Things don’t feel very “Texas,” either. The movie was mostly filmed in Bulgaria, and somehow you can tell.

The filmmakers casually yet ham-handedly raise a few sociopolitical issues but to no apparent end. For example, one of our protagonists survived a school shooting and another is a gun-totin’, truck-drivin’ local. And…that’s it. No exploration of that dynamic at all outside of the obvious foreshadowing that the girl who’s scared of guns will end up having to shoot Leatherface before the credits roll. Otherwise, it’s just a stereotype-infused set up with no substantive payoff. What does seem clear is that at one point in its development, this movie wanted to skewer everyone—boomers, zoomers, liberals, conservatives, city slickers and hillbillies alike. Instead, it misses us all and only succeeds at appearing incredibly tone-deaf and incoherent on the “substance” side of things.

Most egregiously, it seems like Texas Chainsaw Massacre (2022) took inspiration from every corner of the horror movie universe other than the very movie it’s attempting to build upon. Again, it lifted its general approach from the rebooted Halloween series, including its setup, its incorporation of a legacy character, and the way its culmination plays out. But also, the killer here is essentially Jason Voorhees in a Leatherface costume, and the lesson our protagonists come away with is cribbed directly from A Nightmare on Elm Street: Confront your boogieman lest he haunt your dreams forever. In trying so hard to be the quintessential slasher movie, Texas Chainsaw Massacre fails to deliver any of the cache of horror film gravitas that its title evokes.

The things this movie does well are few and far between, but if you look hard enough….  A handful of the kills are great, particularly the first one when Leatherface snaps a guy’s arm and causes a compound fracture, the protruding bones of which he uses to stab the man to death through the throat. It’s brutal and over the top.  It’s just in the wrong franchise. There are also several great shots that depict Leatherface, chainsaw in hand, sprinting after his intended victims as the movie races toward its climax.  These shots are the one element that successfully recalls the terror of seeing the chainsaw wielding hulk sprinting through the woods just inches behind Sally Hardesty all those decades ago.

It feels like there was the germ of an inspired movie here at one time. But utter mismanagement stripped away whatever that was and left an incoherent and wholly unimaginative slasher flick in its place. In a word, it’s generic. Maybe after nearly half a century, it’s time to accept that nobody is going to get this right. So, it’s up to us to either accept these inferior movies for what they are or find something else to watch. 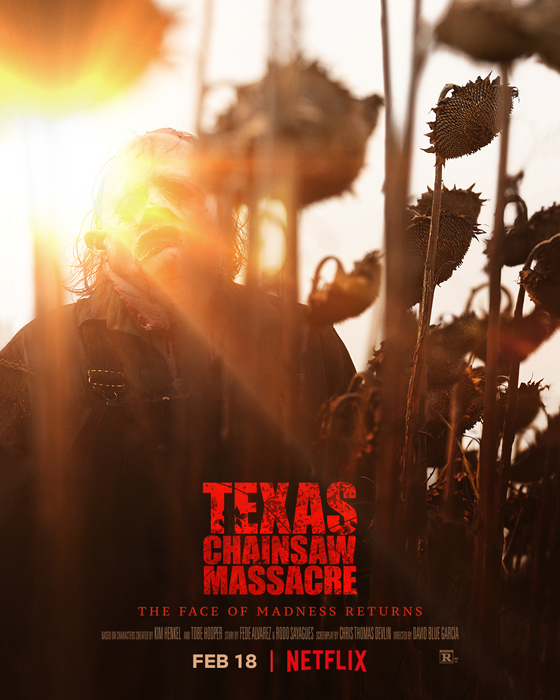