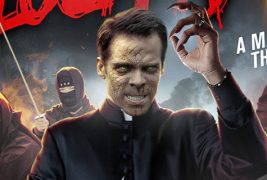 Lord have mercy. So, I just finished watching the award-winning, highly anticipated film, The VelociPastor. Writer/director Brendan Steere’s parodical story about how a “man of the claw” discovers that he’s got the ability to transform into a fierce velociraptor to battle evil…or ninjas. Sounds like a great plot, right? I know, I was super excited to watch this movie and jumped in with my high expectations for an over-the-top comedic gorefest. Read on to find out if The VelociPastor answered my prayers.

I’m just going to cut to the chase and let you know that even though The VelociPastor is “rated X by an all-Christian jury,” it’s sadly a huge disappointment. Like, the kind of disappointment felt when you finally find out that Santa Claus doesn’t exist. In fact, one of the greatly appreciated things about this movie is its run time, which is only about 75 minutes.

Within this time, we’re introduced to a colorful cast of characters. Starting with our “hero,” the devout VelociPastor himself Doug (Greg Cohan), who looks like a beefed-up Michael C. Hall. In the first few minutes of the film, he winds up losing his parents in a way that you’ll just have to see for yourself. Doug’s mentor, Father Stewart (Daniel Steere) consoles him by telling him that “it’s what parents do, they die on you.” Father Stewart then tells Doug that he should travel to a place where God will not follow to help him cope with changes in his life. So, he drives to China. Once there, he encounters a bloodied woman who’s been impaled by an arrow, and who runs to him in her final moments, presenting him a dragon’s claw which she tells him to destroy or he will be hunted forever. She whispers the words ‘dragon warrior’ before dying. While Doug is examining the claw, he accidentally wounds himself with it and then passes out. There’s your backstory.

Doug wakes up in a cold sweat from the backstory dream and tells Father Stewart that he’s hungry and in pain. He then runs out into the streets in search of something to eat. It’s here that we meet a mouthy hooker named Carol (Alyssa Kempinski) and her Ron Jeremy-esque pimp (Fernando Pacheo De Castro) who goes by the name Frankie Mermaid. We’re told that he goes by this name because he’s apparently swimming in bitches. It’s after this exchange that we catch a glimpse of Doug’s first transformation into the reptilian fighter of evil, as he attacks and eats a thug who’s threatened Hooker Carol in the local park. The “transformation” is as hokey as they come, but I’ve gotta give props any time practical effects are used, even if they consist of a crappy rubber T-Rex suit. Yeah, T-Rex.

I’m going to wrap it up here to keep from giving anything else away. I will say that as The VelociPastor moves forward, it gets more and more ridiculous. There are a lot of WTF moments, which figures as this film really doesn’t make a whole hell of a lot of sense, period.

What this film does offer is very quotable dialogue, a few laugh out loud scenes and a fantastic soundtrack. It’s not completely horrible, but it left me wanting more gore and a lot more dino-action. If you enjoy movies like Sharknado or Kung Fury, you’ll absolutely want to check out The VelociPastor with a group of friends, a little bit o’smoke and a whole lotta wine. 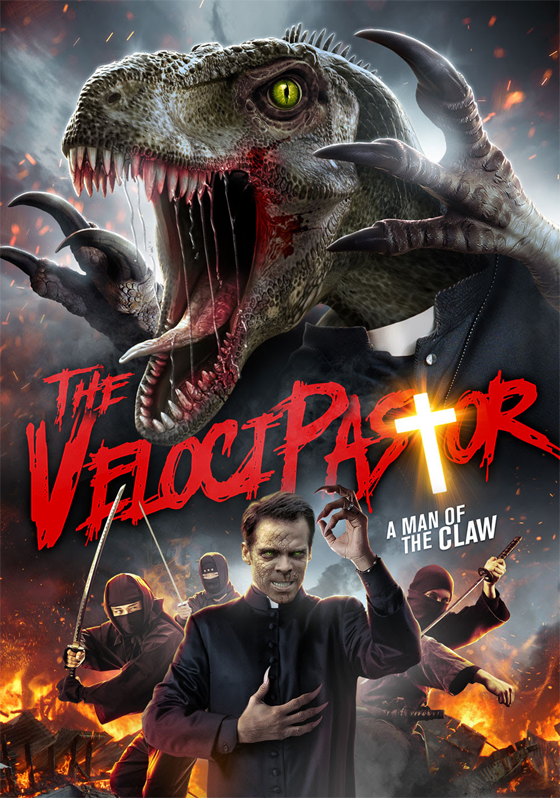 The VelociPastor was released on DVD and digital platforms on August 13th with a Blu-Ray release coming September 17th.