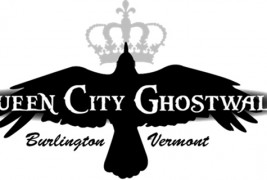 As soon as the Pilgrims got off that boat in 1620, they were telling ghost stories. Ghost stories were in their bloodstream, and their Calvinist religion, with its heavy emphasis on sin and fate, made them predisposed to a certain type of fatalism. What they found in the New World only exacerbated this worldview. Massachusetts then was full of foreboding forests that did not readily divulge their secrets. Worst still, the Pilgrims and then the later Puritans, who were much more hardline about their Christian brand of fire and brimstone, knew what lurked in those woods – demons. We would call these “demons” Native Americans today, but throughout much of New England’s history, the European settler mindset has dominated and flourished. As a result, the natural forces of history always seem like they are besieging the battlements of the modern world.

Thea Lewis, the founder of Burlington, Vermont’s Queen City Ghostwalk, knows a thing or two about history impinging upon the present. It’s a major part of her job as a historian, author, and tour guide. Specifically, Thea Lewis is responsible for keeping alive those things that are dead but still floating around, sometimes quite literally.

I met Thea at a local and independent coffee shop in Burlington, a college town known for its “foodies” and elderly, ice cream-loving hippies. My intentions were to: 1) interview Thea in order to find out more about the local lore of my adoptive city, and; 2) ask Thea about the greater implications that come attached to stories of the paranormal. I am happy to say that I left the interview quite pleased.

Thea Lewis looks a lot younger than her biological years would indicate. This youthful glow more than likely comes from her vigorous lifestyle and the fact that she seems to have her hands in many different pots. Before creating Queen City Ghostwalk, Thea had spent twenty-two years in the world of television as a head writer and producer for a Vermont CBS affiliate. It was a trip to legendary witch town Salem that ultimately influenced her decision to establish her own ghost tour for Burlington. According to her own testimony, Thea found the Salem tour guide lacking, which, considering the obsidian history of Salem, should be a capital offense. Thea is far from a sub-par tour guide, and when discussing the topic of Burlington, it’s quite clear that the Queen City and its various ghosts are her true love affair.

My first question started the whole ball rolling. I asked simply whether or not Burlington was especially haunted, given the context of greater New England. The answer: yes, most certainly. Besides its deep traditions that were imported from places like Quebec and Ireland, Burlington’s spectral history oozes with colorful characters. One family in particular – the Allen family – is behind some of Vermont’s more famous hauntings.

For well over an hour, Thea enraptured me with tales of the Allen family, who were primarily responsible for establishing the Vermont Republic (1777-1791). Great men like Ira Allen and Ethan Allen left behind legacies that can still be found all over northern Vermont, while lesser known family members can be spotted here and there in the local history books. Levi Allen, who was buried as a pauper due to his status as a debtor, was mostly forgotten in life, but remains active in the afterlife. His more famous kinsmen Ethan, who led the Green Mountain Boys during the Revolutionary War, may be the ghost responsible for a phantom white stallion that reportedly romps around on the old Allen homestead in Winooski. It is said that General Allen wanted to come back as a white stallion, and it seems like he got his wish.

The other Allen – Ira – occupies an interesting position within the spooky history of the Green Mountain State. On the one hand, Thea thrilled me with a story about how Ira, recently released from imprisonment in France, came back to the States only find a feud waiting for him. The object of the dispute? Land. Ira, who donated land to the school which would eventually become the University of Vermont, thought that a man named Thaddeus Tuttle had stolen bits from this property, and as a result his ghost still goes growling after the double-dealing Tuttle.

Oddly enough, besides being a ghost himself, Ira Allen may well be Vermont’s first paranormal investigator. On both her website and in person, Thea tells the tale of Ira’s ability to debunk a supposed haunting. While spending the night with a Scottish family of farmers, Ira is told about a terrible crone who haunts the edges of the farm. Despite this warning, Ira decided to investigate, and what he ultimately found was that his Highlander hosts were terrified of a tree branch waving in the wind.

Ira’s greatest gift to the world – UVM – is not without its own ghost sightings, and most of them aren’t so easily explained away. In Thea’s own words, there are 22 presumed hauntings on the campus of the University of Vermont. From a full-bodied apparition in the Bittersweet House to a ghost in the mechanical room of the Royal Tyler Theatre, UVM seems swamped with spooks.

Some of these ghosts have fascinating ties to popular figures and popular American history. For instance, Royal Tyler (the namesake of the university’s excellent theatre) was a known acquaintance of Nathaniel Hawthorne, the legendary American novelist who was both fond of and a frequent guest of Burlington. It is also said that the dastardly Tyler was the inspiration for the decidedly unpleasant Judge Jaffrey Pyncheon in House of the Seven Gables. On a gorier note, H.H. Holmes, the serial killer who would go on to rack up a sizable body count during the World’s Columbian Exhibition in Chicago, was once enrolled as a student at UVM. Considering that Holmes’s bloodlust first manifested itself while he was a medical student at the University of Michigan, it’s not a stretch to say that Holmes’s method of killing the living in order to sell their bodies to cash-strapped medical students might have started in Burlington.

Besides killers and cruel men, UVM is also home to a tragic ghost named Henry, a suicidal student who still kicks around at Converse Hall. One of the most documented hauntings in all of Vermont, the story of Henry has it that Henry was once a medical student who rarely saw the light of day. Henry was so wrapped up and consumed by his studies that he hung himself because he believed that he had utterly failed an important examination. It turns out that he actually ace’d it, but by then it was too late. Now, as an intelligent haunting, Henry is known to pass students in the hallways of Converse, and on one occasion, after an undergraduate engaged in an argument with her sister about shoes, she came back to her room to find all of her shoes lined up in a neat row. Apparently, ghosts can be fashion conscious.

Frankly, I could have talked with Thea all day about the ghosts of UVM. I was once a graduate student there, and I can remember vividly the long nights I spent alone at the Old Mill – the building that houses the English Department. Old Mill, like many other buildings on campus, is home to a ghost, this one being an unknown middle-aged woman. I never saw this ghost, but I was often creeped out by how silent the building got when the sun went away for another day. I am sure if I had seen that ghost, then it would’ve become my favorite apparition in Burlington.

Thea has her own favorite ghost story and can even boast of her own ghostly encounter. In the former, Thea spoke lovingly of Timothy Follett, the former owner of what is now the Pomerleau headquarters. In his day, Follett was a jack-of-all-trades and one of Vermont’s early venture capitalists. Unfortunately, not all of his investments were sound, and Follett eventually died broke. His bitter ghost is said to still haunt the Pomerleau place.

In the latter case, Thea told me of an early morning walk with her dog Zeus. The two were out at Red Rocks Park in South Burlington when they espied a gentleman walking his way along the beach. The man was wearing the uniform of a Union solider. When they got within 30 feet of him, Zeus bolted towards him in the hopes of a pat on the head or a treat. Thea called out “Don’t worry, he’s friendly” to the full body apparition, who then promptly disappeared, After doing some research, Thea discovered that that area of South Burlington had once housed wounded Union soldiers during the Civil War. Back then, “taking the air” was a common cure, so South Burlington in the 1860s probably would’ve seen many soldiers strolling the beach.

This story is just one of many that Thea told during our interview. Thea is an excellent researcher, so her enthusiastic stories are full of fun factoids. Thea is a natural raconteur, and this fact is often seconded by folks who have experienced her Queen City Ghostwalk, which today begins in March and ends in November. If you can’t make it up to Burlington, then I suggest that you purchase one of Thea’s books (Haunted Burlington: Spirits of Vermont’s Queen City and Ghosts and Legends of Lake Champlain), both of which are available through The History Press’s Haunted America series.

There’s no doubt that Thea Lewis is the go-to for all things ghostly in Burlington. Not only does she chronicle the known haunts of the area, but she is working hard on discovering more about the lesser-known sightings in the city. For instance, she is currently researching Burlington’s Battery Park, which was once home to soldiers and sailors during the War of 1812 and is full of barely investigated ghost sightings. On a more personal level, her long history with the paranormal has lessened her fear of death, and Thea bluntly told me that ghosts are merely another side of life, or as she put, ghosts are “Energy that just continues on.” Thea Lewis has plenty of energy still left in her, and it seems that, like the ghosts of Burlington, she doesn’t sleep.