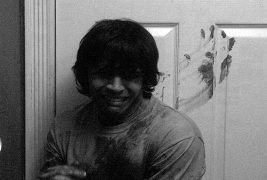 Over a decade ago, an independent, microbudgeted horror flick of the found-footage variety called In Memorium scared the crap out of movie fans…but not as many as it could have and should have and eventually it disappeared.  But there’s good news (unless you’re a scaredy cat).  After being unavailable for years—dead and buried in movie terms, In Memorium is now available on Amazon Instant Video and Amazon Prime!

Over a decade after its premiere at the Hamptons International Film Festival, indie found-footage horror feature In Memorium will premiere on Amazon Instant Video and Amazon Prime on July 27, 2016, courtesy of Amazon’s new Video Direct Program.

The indie sleeper creeper will be viewable on all devices supported by Amazon, and will be available for the first time ever in the UK, Japan, Germany and Austria.

Inspired by the original Blair Witch Project and The Ring, and starring Erik McDowell and Johanna Watts, In Memorium centers on struggling filmmaker Dennis Wade, who after a grim diagnosis, rents a house with his girlfriend to document his final days. Soon after, his cameras capture a supernatural presence in the house.

To watch for free on Amazon Prime, or to download as a rental or purchase on Amazon Instant Video, go to https://www.amazon.com/dp/B01IWN5LLO.

For more information, go to facebook.com/inmemoriumthemovie.