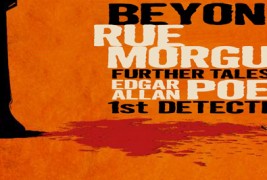 Let’s talk for a minute about Edger Allan Poe. This will be a largely superficial, shallow, glib and possibly even pointless conversation, but by God, I feel compelled to have it.

Poe was a guy (yeah I just called Edgar Allan Poe a “guy,” and yeah, I feel comfortable referring to him just by his last name. We’re tight like that. Plus he’s dead and highly unlikely to raise any real protest) who pioneered genre fiction. All types of genre fiction, but especially anything touching on the macabre. A glance at his most famous stories –THE TELL-TALE HEART, THE CASK OF AMONTILLADO, THE FALL OF THE HOUSE OF USHER, and so on—amply bears this out.

You can feel his influence throughout a number of the early genre practitioners in the late 19th and early 20th centuries, from Jules Verne to H.G. Wells and most especially in the works of H.P. Lovecraft, who shares with Poe a florid, hothouse style of prose that stems from a really fucked up mind. It’s the sort of thing that either you have, or you don’t, this way of viewing the world. This way of interacting with the world. This is one thing that separates Poe and Lovecraft from their fans and legions of imitators. I think you can make a pretty strong argument that even Stephen King, no stranger to overwrought prose himself, seems like a nice, normal guy with a strong imagination, while Poe and Lovecraft seem like fucked up freaks who you’d invite to dinner parties with the sole purpose of unsettling your other guests.

This collection—BEYOND RUE MORGUE—highlights another genre that Poe pioneered, the detective story. Poe is credited with inventing detective stories, and while that’s debatable (if not outright false), it’s safe to say that he helped nudge the evolution of the genre along a bit. Each of the stories in BEYOND RUE MORGUE is written by a different, modern author and features Poe’s detective, C. Auguste Dupin (or his offspring, or Poe himself taking on the name and/or persona of his creation), who’s like a cross between Sherlock Holmes and a down-on-his-heels Hercule Poirot.

Of Poe’s stories (his “tales of ratiocination,” in the author’s words) the most famous is the first (THE MURDERS IN THE RUE MORGUE), the last is the best (THE PURLOINED LETTER), and the middle one is boring and terrible (THE MURDER OF MARIE ROGET. Seriously, it sucks. It more than sucks. It super-sucks. It makes PHANTOM MENACE look like a sleek and purposeful drama, ok? Su-u-ucks.).But the point is that there’s only three of them, and Dupin’s character isn’t terribly well defined in any of them, either separately or taken together. There are certainly hints at a deeper characterization, but unlike, say, Holmes, Dupin doesn’t have an immediately identifiable personality or persona to draw from.

That gives this collection of short stories based around Dupin both an advantage and disadvantage over other collections based on more famous properties. The advantage is that without the well-defined boundaries of, again, a Holmes, or even stories about the Cthulhu mythos, the writer has a lot of freedom to pursue whatever angle he or she wants; the disadvantage is pretty much the same, since these boundaries are part of what gives drama its tension.

For instance, the story THE BLUE LIGHTNING, by Joe R. Lansdale (BUBBA HO TEP, among others) illustrates both sides of this tension. This story is a mash-up of Dupin and Cthulhu which, to me, didn’t work. Because generally speaking (and yes, I’m aware there are exceptions), detective stories and the supernatural don’t mix, and in this case, I felt the story was coloring too far outside the lines. MURDERS IN THE RUE MORGUE flirted with the supernatural; it seemed that the solution must be supernatural in origin. That it’s not is part of the fun. This new story was by no means bad; I just felt the juxtaposition of the mystery with the supernatural jarring; it feels like cheating in a way. It’s like if Scooby and the gang suddenly found they were chasing a real phantom.

But FROM DARKNESS, EMERGED, RETURNED by Elizabeth Massie, another story in the collection, for me was a highlight. The main character was a great-granddaughter of Dupin’s, who thinks she can solve the murder of an acquaintance due to her distant relation. This story, like BLUE LIGHTNING, colored outside the lines, and it reads like the references to Dupin and Poe were an afterthought almost. But I felt it captured Poe’s particular off-kilter melancholy better than any of the other stories.

Of the remaining stories, many are basically traditional detective stories. The Mike Carey (Vertigo Comics LUCIFER) story that opens the collection, THE SONS OF TAMMANY, sets the tone for a number of the stories the follow. Dupin interacts with historical personages and solves a seemingly intractable mystery that has baffled the police. This story is maybe the most straightforward mystery/detective story in the whole collection.

The biggest-named contributor to this collection, especially from a horror perspective, is Clive Barker. His story, NEW MURDERS IN THE RUE MORGUE, doesn’t disappoint. He manages a tone both elegiac and mysterious. However, like all the stories in BEYOND RUE MORGUE, it falls short of equaling Poe’s effortless bug-eyed crazy. That’s neither an indictment of Barker’s story, or the collection in general; it would be like if a group of musicians and songwriters were to record an album of songs written in the style of Bob Dylan. It can’t be done. No matter how close or clever the mimicry, you can’t recreate a singular brand of half-mad genius.

My biggest complaint about BEYOND RUE MORGUE is that only Poe’s first tale of ratiocination, THE MURDERS IN THE RUE MORGUE, is included here. Including THE PURLOINED LETTER would have given more balance to the book in general, and more insight into Dupin’s character and world, but that’s a pretty minor quibble. It does include RUE MORGUE which, after several pages of not entirely engaging philosophical prose, gets to the heart of the matter. The murders are shockingly brutal, all the more so for a story dating to the 1840s, and the identity of the murderer is truly surprising. There are a lot of ways Poe’s story is a total mess, but it’s a pulpy edge-of-your-seat mess (sort of like a Samuel Fuller movie) that’s a lot of fun.

It has to be said, too, that Titan Books does their usual fantastic job curating this book, from the cover and packaging to the contents. BEYOND RUE MORGUE won’t change anyone’s life, but it’s an enjoyable read, perfect for a rainy evening by the fire, with a glass, perhaps, of Amontillado close at hand. 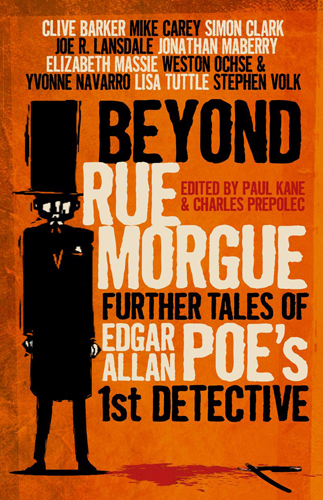