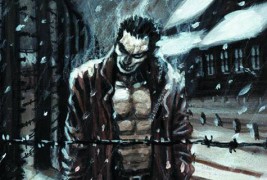 The Crow: Skinning the Wolves is a return to the franchise by long-absent creator James O’ Barr, who has moved the Crow’s current incarnation from gritty urban landscapes to a Nazi concentration camp.  Even as a longtime fan of O’Barr, I was skeptical.  Can you pull off a supernatural revenge fantasy in the midst of one of history’s greatest tragedies?  The answer in short is “Yes, if you handle your supernatural elements with an emotional maturity.”

The newest Crow is a man who was killed at the same concentration camp in which he is reborn to wreak his vengeance.  Throughout the story he remains enigmatic.  Whereas we knew a great deal about Eric Draven’s past, this Crow is very mysterious.  In another departure from O’Barr’s established mythology, this current Crow lacks the iconic makeup—a wise story-telling decision.  By grounding the images in reality, O’Barr and Terry have made the scenes that much more gritty.

The Crow’s main antagonist is only known as the Commandant.  As the story moves forward readers learn little about his background and even more about who he is as a person, giving the Crow a fully-formed foil.

The artwork, by Jim Terry, is starkly powerful and creates an evocative mood.  O’Barr and Terry have done an incredible job creating a down-to-earth, gritty reality for their characters to inhabit.  As the book begins, the majority of panels are close-up images, putting the reader into Skinning the Wolves’s dark world as a direct observer, in the mêlée.  There is a fantastic sequence early on where luggage is ripped open and a Nazi walks over the contents, trampling a child’s doll.  Small details are never ignored, but treated with reverence and respect. 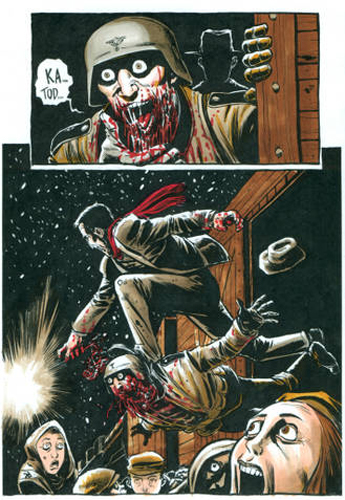 The Crow works best as an agent of righteous chaos in this corrupt and vile setting.  In this regard, placing the events in a concentration camp is a good call, though it is difficult to think of the Crow as heroic, because saving others is only a byproduct of his actions rather than his primary motivation.  With the tone and setting in place, the new Crow’s vengeance comes fast and furious.

A great number of unnamed Nazis meet their premature deaths, but James O’Barr and Jim Terry still establish them as more than just fodder for the Crow’s wrath.  One of the book’s strongest scenes involves two Nazi guards justifying their roles at the camp, despite their disdain for the operation.  These small moments help establish a simple humanity to all the parties involved and also work to make the situation much bleaker as a whole.  These agents of evil are simple men.

Likewise, when the Crow confronts the Commandant, the scenes between the two are wholly satisfying, comprised of retribution, revelation, and simply amazing storytelling.

By keeping each man nameless it also lets their battle of wills extend beyond the two specific men into something larger and more universal, beyond even the risky setting of the story.  The Crow: Skinning of the Wolves is a book that rewards the reader with rich, complete storytelling, and while the script is not overly complicated from the perspective of narrative, it is still an emotional work that never talks down to readers.  Longtime fans will be pleased. 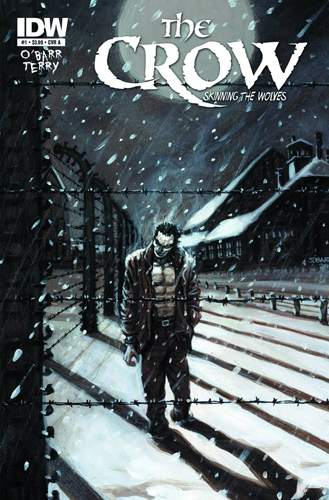