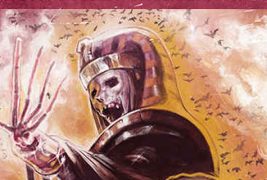 It’s true that I am mainly a doctor of medicine (or so it’s been claimed) and I’ve mostly been confined to the laboratory. Yet I’ve always had an interest in archaeology. Digging up stiffs of ancient ages has always had its fascination for me, which explains my love of mummies and archaic curses. In recent decades, books and movies based on these subjects have been few and far between.

So, I was delighted to see Fury from The Tomb by Chicago-based author S.A. Sidor on the shelf of the local bookstore. One look at the pulpy, Raiders of the Lost Ark-inspired cover of this beauty drew me in and a quick read of the back-cover hype got me more intrigued. Here was a book set in the latter days of the 19th century about evil mummies, Mexican bandits and intrepid archaeologists. SOLD!

The book is apparently meant to be the first in a series under the heading of “The Institute of Singular Antiquities” featuring a steady cast of characters. Fury from The Tomb is basically the origin story of the Institute and explains how its eccentric members came together.

This book is WILD! It does indeed have much of the globe-trotting adventure of the Indiana Jones movies, but what took me by surprise was some of the sheer horror contained within these pages. There are some nightmarish, bloody scenes here, more than enough to push the book into the horror category. And yet there’s also enough bizarre, off-kilter humor here to almost make this a satire as well. And did I mention the profuse amount of classic Western settings and tropes as well?

Sidor crams an awful lot into this book, yet its general trajectory is very straightforward and easy to describe. The events are seen through the eyes of one Dr. Romulus Hugo Hardy, who is our hero and narrator. As the book opens, it is 1920 and Hardy is reminiscing about the terrible incidents of more than 30 years earlier…

At that time, Hardy was a talented but inexperienced Egyptologist yearning to do real fieldwork in the Land of the Pyramids. He gets his break when an eccentric millionaire named Montague Pythagoras Waterston hires him with a generous advance of money and sends him into the Sahara in search of a forgotten tomb. Hardy never actually sees Waterston, who is described as both deathly ill and fanatically interested in the occult…all business is conducted from afar with the help of the tycoon’s daughter Evangeline.

After difficult digging in the barren sands, a well-hidden tomb is finally found. But Hardy and his foreman Hakim are shocked to find out that the tomb is that of Amun Odji Kek, an ancient sorcerer of diabolical fame said to be the most evil man that ever lived. When the seal of Kek’s tomb is broken and the expedition heads inside, the real horror begins. Hardy is pursued through narrow tunnels by a slavering giant maggot. And then the tunnels begin to flood with what seems to be human blood…

After a dreadful loss of life and much trauma, the huge black sarcophagus of Kek is secured, along with the coffins of five more mummies, Kek’s followers. During a grim sea journey back to America, Hardy is haunted by a vision of what could be the giant mummified form of Kek himself.

Once the sarcophagi arrive in New York, a train is secured to take them across the country to Waterston’s West Coast headquarters. Two taciturn Pinkerton agents are assigned to protect the fabulous find. Other than some ominous dreams and omens, the trip in uneventful until the train arrives in Arizona territory. Then it comes under attack by a band of Mexican bandits who are intent on stealing the fruits of the tomb.

These bandits are far from the kind who harassed Humphrey Bogart and friends in the Sierra Madre. The train’s porter Thomas informs Hardy that they are known as “necrofagos” …ghouls who eat the bodies of their victims and wear masks made of human flesh. Not a nice bunch at all. 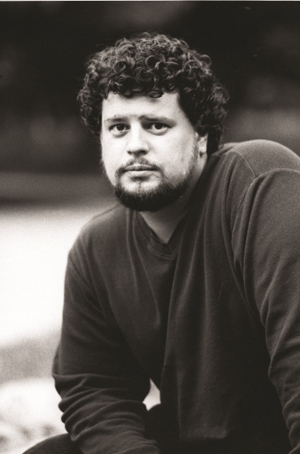 Waterston’s daughter Evangeline appears aboard the train just before the necrofagos attack, warning that they may be following the orders of Amun Odji Kek himself. The train is abruptly derailed when it falls into a pit that seems to have been chewed out of the rock by a gigantic worm…a larger version of the one that chased Hardy in Egypt.

After hair-raising moments, the necrofagos, led by a cheerful but inhuman chief known as El Gusano (The Worm), manage to make off with the sarcophagi. Hardy and Evangeline have managed to survive, along with a young Chinese porter named Yong Wu. After heated debate, the decision is made to hire some help and go after the necrofagos and recover the stolen treasure.

Yong Wu says he knows of a great gunfighter for hire in a nearby small town, a man without fear who can help them. They make the acquaintance of this man, named Rex McTroy and find him to be a rather cold-blooded fellow who is as hard as nails. I immediately pictured Sam Elliott in my head as McTroy.

After some deft negotiating, Hardy and friends enlist McTroy’s aid and set out to see if they can recover the lost mummies. Their destination is a former Christian mission in a remote area. The mission is not only the headquarters of the necrofagos, but it is inhabited by a band of Satanic monks who plan on bringing Kek and his followers back to life so they can engender a new dark age. Fun for all the family.

If this seems like an in-depth synopsis, believe me, it doesn’t even skim the surface of everything going on in this book. Who are the mysterious supernatural allies with a connection to the orphan Yong Wu that are providing vital aid to Hardy’s expedition? Who is the unknown force behind the robbery of the mummies? What is Kek’s grand plan and how does it involve the ancient Egyptian gods? And then of course I haven’t mentioned perhaps the most bizarrely endearing character I’ve encountered in many a moon…the sympathetic, torn-in-half zombie bandit Rojo, who likes to play guitar and trade banter with the people he earlier tried to eat. My words can’t do him justice.

The pulp aspects of the book are obvious to anybody who glances at the cover to Fury From the Tomb. The action is virtually non-stop and features cliffhangers and impossible traps that would do Indiana Jones proud. But what surprised me was the darkness and violence in the book. This is not something for squeamish readers. There are a lot of extremely gruesome deaths during the course of the story. The grisly habits of the necrofagos in particular are focused on in great detail. And author Sidor has a rather unique way with words, resulting in some surreal descriptions—he has a sardonic touch even when describing horrid scenes.

The main villain Amun Odji Kek is one arrogant and sadistic antagonist. He appears first in dream-like visions, then as a desiccated giant mummy and finally as a fully living sorcerer. There’s a lot of classic Marvel Comics villains like Dr. Doom and Dormammu in Kek, who loves to speak of his own magnificence and the torments of hell he endured while imprisoned in the afterlife. There’s no shade of grey or sympathetic vibe to this guy…he is an inhuman monster.

I think sometimes Sidor’s liking for macabre humor gets the best of him. Several of the action scenes come across as absurd, particularly when Hardy winds up riding the monster worm El Gusano. The only fitting description of the scene I could come up with is “worm rodeo.”

Romulus Hardy emerges as kind of a courageous bookworm who takes himself very seriously. Not the most dashing hero, but with a kind of stubborn drive that makes him admirable. McTroy is right out of Western “central casting” as the cool and deadly gunslinger. Evangeline starts out as a not very likable character but grows during the story. Her relationship with Hardy proceeds in a rather predictable fashion, but the story’s velocity and Sidor’s clever wordplay make her interesting. Yong Wu is the sympathetic child in peril and something of a cliché, but it’s his connection to the mysterious allies that makes him unique and fascinating.

There’s not much out there like “The Institute of Singular Antiquities” right now. Weird Westerns are slowly becoming a thing and Fury from The Tomb has much of that vibe, but this is pure pulpy goodness with macabre twists to make it interesting to modern readers. You can pick some holes in this initial offering but that almost seems to be built in as part of the story. One thing this isn’t is another interminable “door stopper” epic that requires you to buy ten volumes to enjoy the story. I actually think it could have been pared down a bit more, but since Sidor keeps the ball rolling, it’s not overstuffed to the point of being unenjoyable. Back in the ‘70s and early ‘80s, a lot of horror and SF books were churned out fast and nasty and didn’t require a Ph.D for a new reader to jump on board.

I will check out the second book The Beast of Nightfall Lodge where Hardy and Co. get on the track of what sounds like a werewolf. Will it build on the success of Fury from The Tomb or be a step back? Time will tell, but I’m hoping this series really takes off. 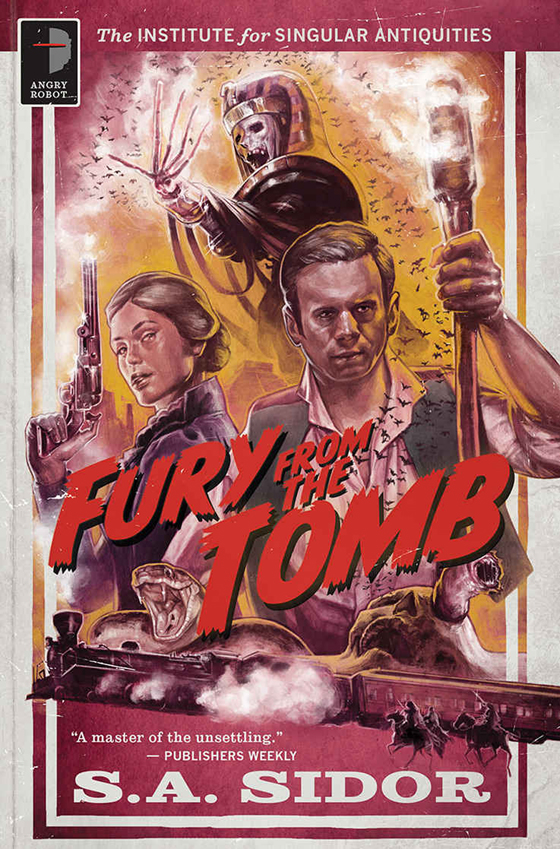