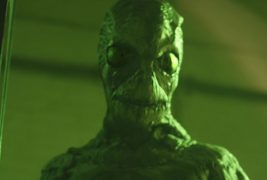 That was the warning issued at the end of the original Thing from Another World, one of the more notable films that ushered in the age of alien invaders. Over 60 years later, the invaders are still coming in films both bombastic (Independence Day) and thought-provoking (the more recent Arrival).

Budget has never been an issue for alien invasion films, as anybody who has ever seen Plan 9 From Outer Space can attest. With Fighting the Sky, we have a modestly budgeted indie film that tries to tackle the subject in modern times.

Alas, the film is a bit of a mess, with just enough promise to make me feel disappointed. The major problem here is that the movie really has no firm idea of what it wants to be. A modern day Scooby Doo with eccentric kids looking for galactic mysteries? A tense, psychological look at alien invasion ala Signs? A 21st century tribute to old timers like Earth vs. The Flying Saucers? At certain points, it is all of these things. A great script and director could even make the mix work. But here it’s just a jumble with an unsatisfying ending.

The movie looks like it was a get-together for the Faraj family and friends. Conrad Faraj shows up as director and co-writer, Alejandro and Mario Faraj are listed as producers and Jinette and Judith Faraj star in the movie as the Paz sisters. This is a throwback to the good old days of low budget film-making, when guys like Ed Wood, Al Adamson and Ron Ormond would throw a big party for family and friends while at the same time making a movie. I always thought that would be a ton of fun.

The film opens with a mystery, as a rustic old farmer is baffled by noises and lights at his isolated estate. Soon a mob of strange and silent people appear out of the forest. “Where’d you people come from?” asks the old-timer. The group responds by silently pointing to the sky….

A nice opening but there is very little follow-up to it. It may have some relation to the movie’s final scene, but it’s all very vague. We’re not sure if the scene takes place in our time or the past.

Next, we wind up at what looks like a college kegger. Here we are introduced to our heroine Lorraine (played by the very spunky and attractive Angela Cole). Ten pointless minutes are wasted detailing her distaste for macho douchebag Robert, who tries to force himself on her until she douses him with beer. Robert seems to be the designated coward in Fighting the Sky and has little other reason to be around.

It seems Lorraine was formerly the leader of a loose group of college-aged friends united by their love of strange phenomena. She is now separated from the group. This group reminds me nothing so much as a real-life version of the Mystery Inc. gang from Scooby Doo; all they’re missing is a big dog. The de facto leader of the band in Lorraine’s absence is Roy Shaw, played with some verve by Roger Conners. Again, a lot of time is devoted to the rest of the investigators trying to get a mopey Lorraine back in the groove. Finally, the amount of weird noises and strange events being reported gets Lorraine out of her funk and back in the game.

We also get introduced to the Paz sisters, Valerie and Rosie. Valerie is also something of a UFO nut, even going so far as to steal a book on weird phenomena from a library patron. The sisters are played by Jinette and Judith Faraj respectively…obviously relations of the directors. Jinette is passably average as an actress but Judith is pretty dreadful.

When Lorraine eventually rejoins her comrades, they throw themselves full-bore at the alien mysteries that seem to have the world on edge. There’s one scene where they pretend to be filmmakers and bluff their way into what seems to be a mental hospital to interview saucer contactees that had me convinced this whole thing was really just a farce. But later, there are scenes of genuine tension and terror as the alien invaders attack. This is part of the general schizophrenia that plagues the film.

After well over half the movie has passed, Lorraine and friends finally cobble together a sound-based method of revealing the invisible UFOs that are seemingly everywhere. The first appearance of the saucer is actually a pretty impressive scene for such a low budget movie and the spinning saucer is quite good. It reminds me of a cross between the ships the Visitors of the old V miniseries used and Harryhausen’s spinning beauties from Earth vs. The Flying Saucers.

Pretty soon a full-scale invasion seems to be underway. We get a scene of the alien saucer raiding the small town where the movie takes place. This is again a pretty spiffy scene, complete with fiery explosions and screaming crowds. OK, it’s easy to tell this isn’t an Independence Day-level of spectacle, but the attack is well portrayed considering the budget. We also get a good look at the aliens themselves…a reptillian bunch that resembles the Sleestak from Land of the Lost. They are portrayed strictly as monsters…there is no communication or even attempt at communication between humanity and the intruders. A missed opportunity there, I think.

Elsewhere, the Paz sisters are on some kind of school trip to a forest preserve when they see their teacher beamed aboard one of the UFOs, causing panic and leading space cadet Valerie to take charge of their group. They eventually meet up with Lorraine and her gang, who take refuge from the alien assault in the abandoned home of Lorraine’s deceased parents, which by wonderful coincidence is packed full of weapons including deadly nerve gas. You can see where this is heading.

This leads to the most suspenseful part of the film, as the hostile aliens land in full force outside the house and decide to see if there is any resistance within. There’re some tense moments as the slithery creatures stalk past the hidden humans.

The situation finally explodes into confrontation, leading to the confusing ending of the film, as apparently Lorraine is taken aboard a saucer by the aliens, leaving the rest to…well, we never really find out what happens to them or to the rest of the world, for that matter, because we next see Lorraine waking up in a house with decidedly old-fashioned furnishings.

The ending is meant to engender a feeling of mystery, but it results only in unsatisfied confusion. After seeing an apparent invasion of our planet by hostile forces, it’s not asking too much to get some kind of hint to how that winds up. Does humanity fall to the aliens, leading to slavery or extinction? Or do we find a way to come together to fight them off? Well, keep guessing, because you’re not going to find out here.

I could take even a really downbeat ending to Fighting the Sky as long as some kind of conclusion is reached, even though the first half of the film seems aimed more towards light comedy. But we don’t get anything of the kind. Instead, we get what seems to be Lorraine becoming part of a mystery that she was obsessed with.

To cut to the quick, Fighting the Sky just doesn’t satisfy. It comes across as a crazy quilt of styles without an ending. I can’t dismiss the film completely, because it does have its good points. It is surprisingly well directed with no major goofs or feeling of being cheap and rushed. The musical score is quite well done and well-integrated with the action. The effects are more than passable for a low budget film, with a striking scene of UFOs attacking a small town, as well as some pretty good “man in a suit” type aliens. And I give the filmmakers full credit for going that route instead of coming up with some cheap CGI creature. Angela Cole is an actress to watch, because her performance as Lorraine is natural and likable and as said before, very easy on the eyes.

But none of that matters when we have an unfocused script and a huge letdown of an ending. There was a real chance to come up with a strong independent film about alien encounters here, but it just didn’t happen.

Will we someday get the kind of movie that Fighting the Sky should have been? I guess the only answer is…keep watching the skies.